Over the past 24 hours, the cryptocurrency market has gained $19 billion, from $248 billion to $257 billion, as major cryptocurrencies including bitcoin and Ethereum recovered from their recent losses, as bitcoin price rose 4%.

However, as time passed, bitcoin started to demonstrate some buy volumes, and it picked up momentum on April 7. Eventually, within a 24-hour span, the bitcoin price increased from $6,500 to $6,950. 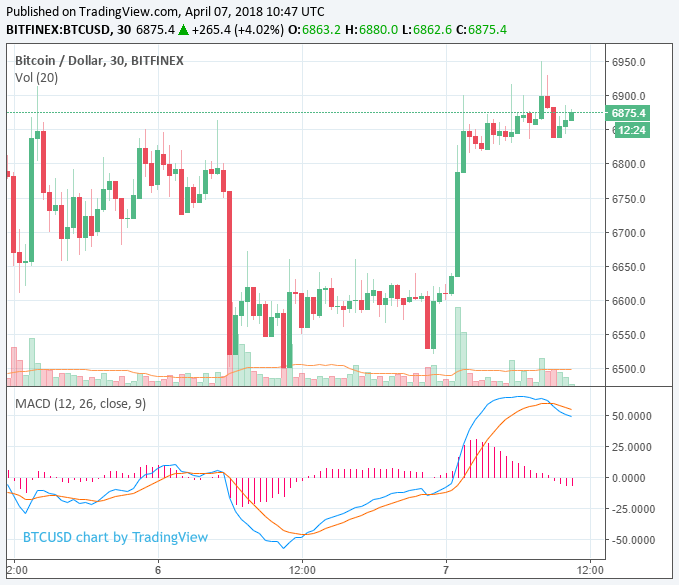 Throughout today, bitcoin has shown some signs of recovery, and if this rally takes bitcoin to the $7,000 region, it is likely that bitcoin could eye the $7,500 mark, as it had earlier this week.

This week, George Soros and Soros Fund, a fund founded by the legendary $8 billion investor, announced that it is preparing to trade cryptocurrencies, as Bloomberg reported. Over the past three months, several large hedge funds like Fortress have exited the space. If new capital comes into the market in an extremely volatile period like this, it could help bitcoin to recover from its previous losses.

“Adam Fisher, who oversees macro investing at New York-based Soros Fund Management, got internal approval to trade virtual coins in the last few months, though he has yet to make a wager, according to people familiar with the matter. A spokesman declined to comment,” read Bloomberg’s report.

Still, although several altcoins have outperformed bitcoin in the past few days, it is uncertain whether the altcoin season will arrive in the short-term. SInce January, bitcoin’s dominance over the cryptocurrency market has intensified, and it will likely increase as new capital flow into the space.

africa steemit bitcoin cryptocurrency photography
3년 전 by amudayusuff201530
$0.00
6 votes
댓글 남기기 4
Authors get paid when people like you upvote their post.If you enjoyed what you read here, create your account today and start earning FREE STEEM!
STEEMKR.COM IS SPONSORED BY