Data: More hogs are on factory farms than ever before

Hog farming in the United States is a growing disaster for public health and animal welfare. According to Census of Agriculture data from 2012, 96% of hogs and pigs were on factory farms, despite the fact that most farms are small.

To investigate trends in pork industry, I examined data from the US Census of Agriculture on hog farms by farm size, which spans from 1997 to 2012. While most of hog farms are small, the amount of small farms has decreased across the board since 1997. During the same period of time, the amount of farms with 2,000 or more hogs (which are considered to be factory farms) has increased. Here's how that impacts the distribution of hogs by farm size: 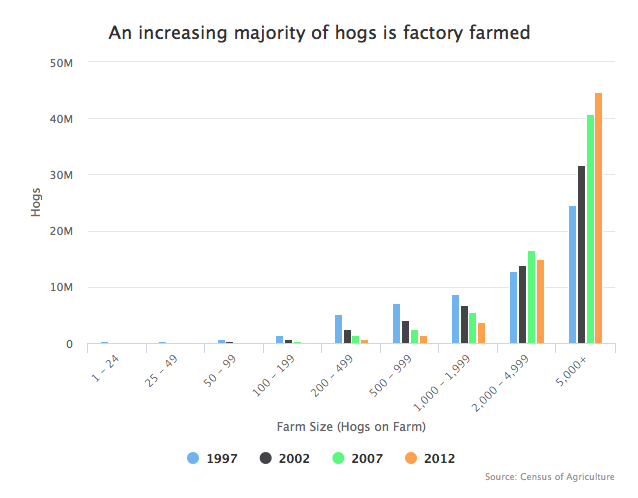 While the sum of small farms barely register on this chart, a small amount of factory farms hold an increasing majority of hogs in the US. Since 1997, smaller farms have come to represent a diminishing amount of the total hog population in the US. On the other hand, factory farms with over 2,000 hogs contain over 96% of the hog population. More than ever, hog farming is an industrialized business.

agriculture animals food education sndbox
5년 전 by somethingburger57
$22.90
23 votes
댓글 남기기 2
Authors get paid when people like you upvote their post.If you enjoyed what you read here, create your account today and start earning FREE STEEM!
STEEMKR.COM IS SPONSORED BY

I wonder what this centralization, not to mention industrialization, does to the porcine gene pool.