When you hear that Trump is pulling support from the Kurds, these are the people we are not supporting anymore.

When you hear that Turkey is massacering the Kurds, these are the people being killed.

The nightly news from the corporate news whores sanitize what is happening in the war zones.

You are not capable of handling the truth, according to them.

You support these massacres with your apathy.

You not caring enough to voice your opinions in the streets and to your friends, your willingness to go about business as usual, is directly resulting in the deaths of these people, just like you, that only want to live and raise their children in peace.

Take the time to learn the truth as seen from the eyes of the people that the bombs, that your taxes paid to create, are killing.

If you call yourself an anarchist, these are also anarchists, support them.

They want only to live free of coercion.

Your continued tolerance of rule by force will leave you with blood on your hands.

Have a perfectly peaceful day.

Vote FBA King of the World!

Keep working, stop paying.  No war, but the class war!!

How to win in court!

How to win in court for far less!! 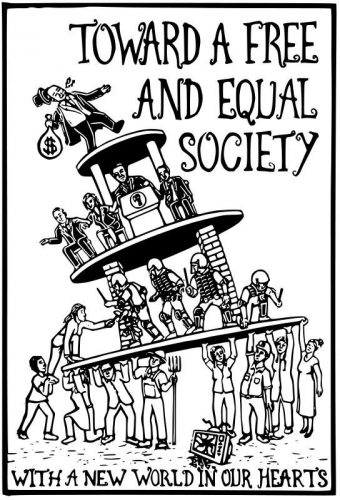 anarchy rojava war politics documentary
3년 전 by freebornangel72
$4.93
28 votes
댓글 남기기 37
Authors get paid when people like you upvote their post.If you enjoyed what you read here, create your account today and start earning FREE STEEM!
STEEMKR.COM IS SPONSORED BY

Thank @freebornangel for this post! Truly thank you for caring!

First they came for the communists,...

Solidarity with all who suffer aggression!!

Yes, rule by force is the disease, love is it's cure.

The Kurds don't really want a bordered land to govern , it is not in there nature . The World forced the kurds to claim there right to exist . To do so they had to try and claim the land they already lived on for ages .

I see similarities with the history of native American tribes .
So not at least surprised that the USA again drops a treaty .

The Kurds are to free to exist , can not be controlled so must be
destroyed so the world can pump more oil and gas from north to south .

After the Armenian genocide the Turks would love to wipe out the Kurds to , all for a greater Ottoman empire .

I am afraid that in a near future there will only be art and writings left to reminds us of the Kurds , filled with lies to conceal the truth .

Good knowledge about the Kurds @small1axe. Where are you from ?

The Netherlands , thank you , i might not be well educated but i learned to read and write a bit .
I would not let them educate away my free will do , i can learn and think for myself ;-)

Like it wasn't normal when the Kurds where holding IS away from Turkish borders and Erdogan send in his army to attack those Kurds . I remember those event's even if Media hides them and change the story for there own profit .

No, you're more educated than some "educated" people who probably can't read and write or even just think as well as you. Indeed, some people are aware of what happened and what's happening, and some people with short memories will believe what the stories will tell them tomorrow in the media.

The little power i have , my voice and writing , makes no difference or mark on this world , i am nobody . Most will say , why bother , why even try ?

Cause by doing this i know that i am not alone in my thinking .
Just like a small axe i keep chopping of chip's and bit's .
To tear down oppression and make the need for real freedom grow.

Consider me the one next to you on the barricades , i am prepared to defend all of our freedom !

Thank you for this post. The Kurds need all the societal support they can get. Turkey is currently besieging Afrin, Syria, and purposefully slaughtering the Kurds through a thin veil of fighting terrorism. The world MUST band together to prevent an all-out Kurdish genocide at the hands of Erdogan.

If we stopped supporting terrorists and dictators in the region, we wouldn't have to support anyone at all, the region would settle on its own.

Well, at least not if it keeps getting bombed out of existence.
https://listverse.com/2016/06/29/10-instances-of-anarchist-societies-that-actually-worked/
https://en.wikipedia.org/wiki/List_of_anarchist_communities

Maybe you should look farther afield for your information, eh?

In the UK, if one was to set out an anarchist system – with no government. Everything would fall apart – crime rates would grow exponentially, no free healthcare would exist, the rich could do whatever they wanted.

Which is why an anarchist community doesn't use money.
Criminals would likely be strung up on lamp posts, and everything would be free.

The workers already do all the work, why they insist on playing a game that makes them buy back that work at a loss is a testament to how effective the mind control has been.

If the workers keep working, but stop paying, only the banksters get mad.

Yes. Can't you imagine problems if it was acceptable to string people up on lamposts, just because you and your mates accuse them of a crime.

Well, if you are a good person, and so are your neighbors, it won't be much of a problem.

When I lived in Mexico I became aware of a number of cases where bad people were given what they had coming.
When the cops got there the neighbors shrugged and said he was a bad man and that was the end of it.

I hope you can free your mind from the walls constructed by those that wish to control you.
Examine you deepest beliefs.
There are reasons that you believe that way, mostly for purposes of keeping you on the plantation and buying at the company store.

I may be a good person, but many of my neighbours are all out for themselves. The issue with anarchy is that it's such a big leap of faith, and requires everyone to follow the system to be successful that it's unlikely to be so.

All anarchy needs to be successful is that you agree not to be a criminal.

If you operated they way the gov't operates, you would be in prison.
Why do accept that it is ok for folks to be criminals, as long as they get a gov't check for doing so?

You support these massacres with your apathy.

^This. Silent support is aggression against those whom you claim to support. That may sound like a strong statement, but you're just giving permission to abusers.

All evil needs to triumph is for good people to stand silent.

This is why I spend sooo much fruitless time on the reward pool rape.
If we simply let it occur, it will continue.

Excuse me if I sound uninformed but is it true that with Russia coming to some agreement with turkey, that their existence in NATO is in question? Is this a last ditch effort by the US to cater to turkey? Making the Kurds the sacrificial lambs so to speak. Oil along with turkey staying in NATO being more of the priority’s to this regime than staying loyal to the Kurds.

The kurds are anarchists, they were only used while they fit the statist narrative.
Isis bad, kurds good.

Now that they are not needed anymore, they will be sacrificed to larger goals.
Globalism.

The united snakes is only your friend when you serve their needs.

Anarchism cannot be allowed safe haven anywhere, if you are a statist.

The United States GOVERNMENT (actually PRESIDENCY) is only your friend when you serve their needs.

Not really. Rule by force is actually necessary sometimes.

Defending yourself from attack is not ruling by force.

As long as nobody is aggressing against you there is no need to defend yourself with violence.

Absent those folks forcing these folks to comply there can be no violent conflicts.

Rojava is more than based my friend! :D