I don't make a lot of holiday posts, but for World Tapir Day I'm going to make an exception. 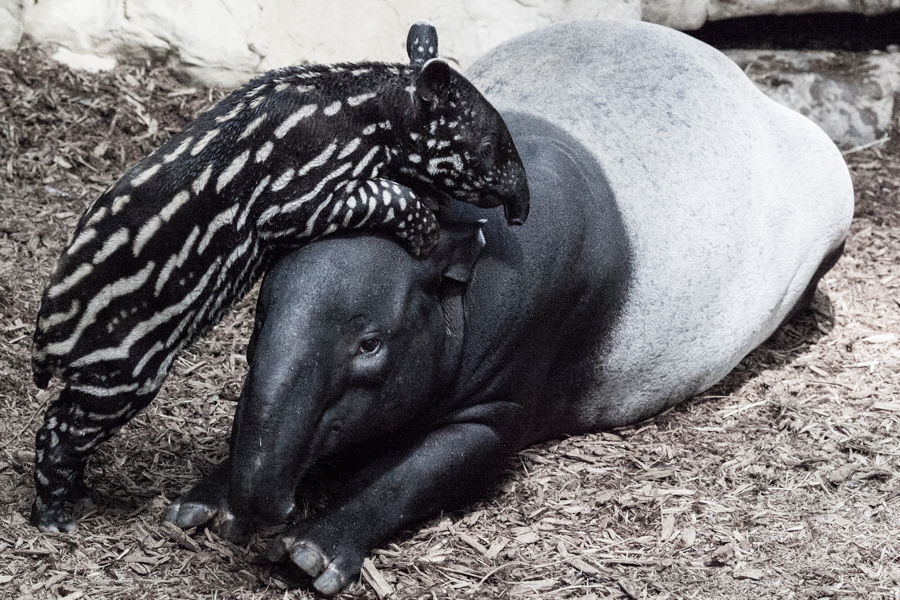 I've been fascinated by tapirs for as long as I can remember. It's easy to see why. I'm a large mammal who sleeps a lot, is most active in the morning and evening, likes to swim, and is gentle most of the time but can be fierce when appropriate. Tapirs are not only introverts, they're maybe the animal most comfortable with being introverts.

So when my local zoo, the Minnesota Zoo, had a baby Malayan tapir in 2013, I was terribly excited. I had already been visiting the zoo regularly for several years to take photographs, and had built up the sort of strangely casual relationship with Bertie, the mom, that you get as a zoo photographer with an affinity for a particular animal. She would come and ask me for nose-scritches, and I wouldn't do it because I didn't want to get in trouble. Sometimes I would talk to her quietly while she was resting and nobody else was around. Amirah had an interesting method of learning to get into her pool.

It helped that the timing was extremely convenient. Tapirs, even baby tapirs, spend most of their time during the day sleeping. Amirah developed a routine where she was awake from 9:00 to 9:30 or 9:45 and would then go to sleep for the rest of the day. So I developed a routine where I was at the zoo from 9:00 to 9:45 on a lot of those days, and then once she was asleep I would go about my other business.

Not really knowing what to do with all of those photos I started a Tumblr. I don't know if you know this, but baby animals do pretty well there.

Previously in my photography career I had been very careful to only release my best work, carefully edited, test-printed, well-thought-through. For this project I decided to do the complete opposite: if it was anywhere close to in focus, I posted it to the Tumblr. There are some pretty terrible photos there.

But the point wasn't that it was me, the point was that I was doing a project no one had ever done before: extensively documenting the life and growth of a baby tapir in a way that was open to the public. 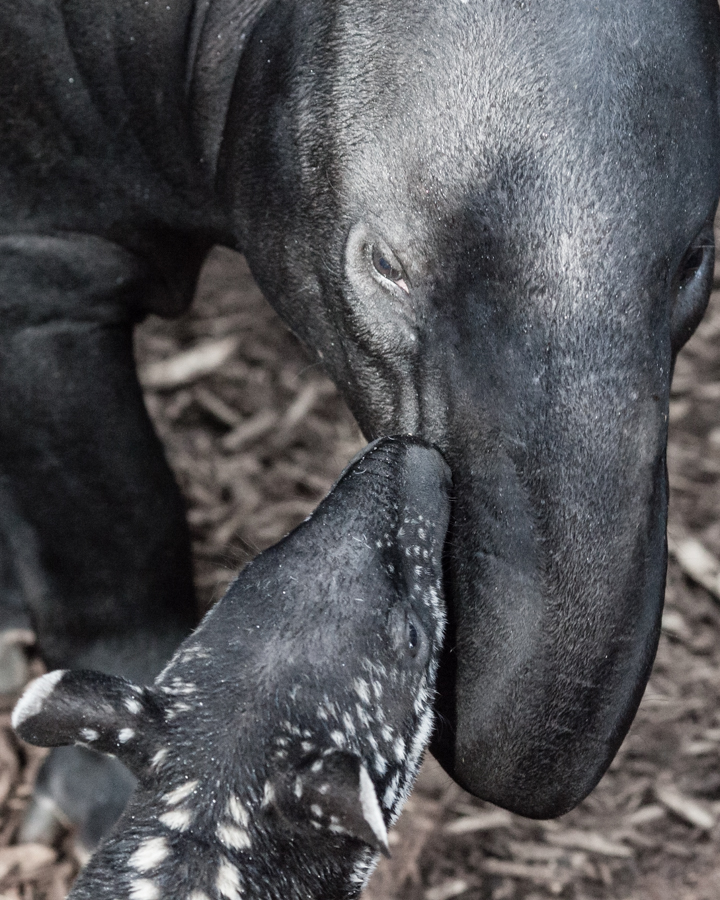 I just adore this one. She never stopped doing this though. 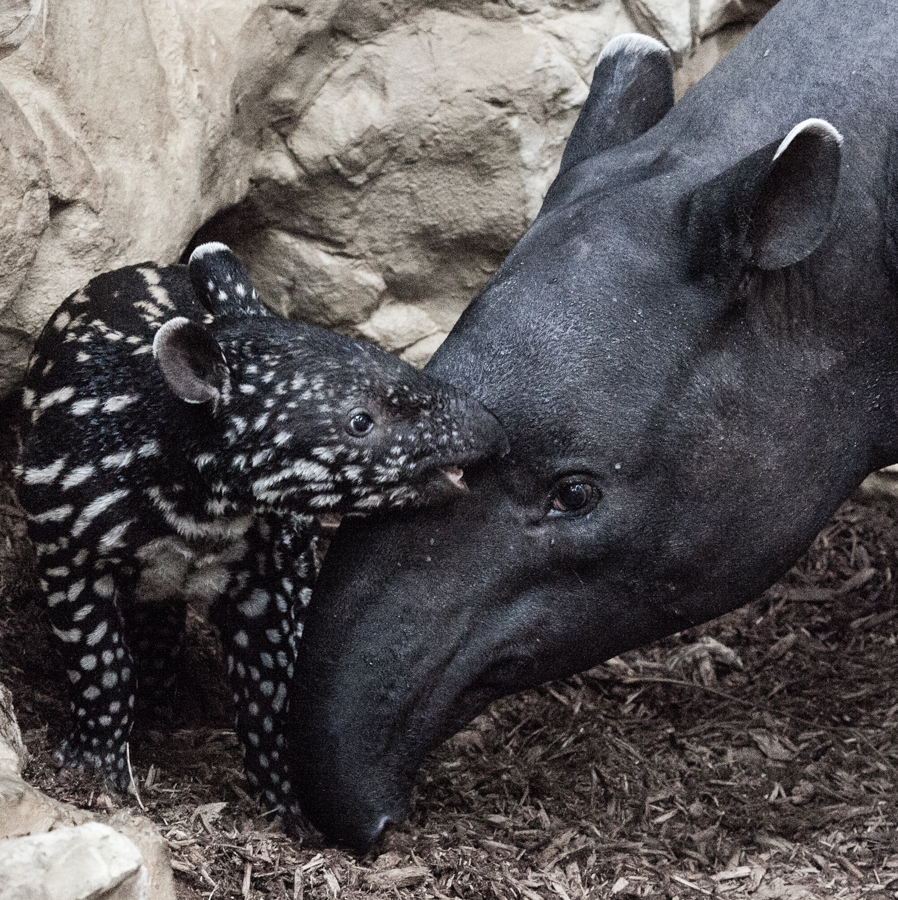 Amirah at her tiniest public appearance 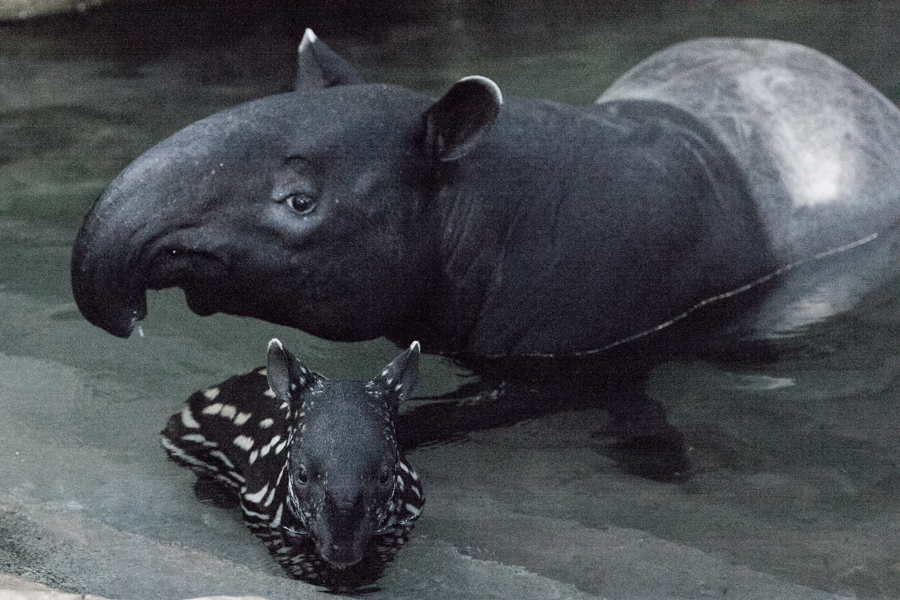 I followed Amirah for about a year, as she lost her spots and grew into an adult tapir. I ended up with over three thousand pictures, about 1800 of which ended up on the Tumblr. In the winter I finally had to learn flash photography, so there are some real stinkers in there as I was trying to learn, and in the week that I figured out just how much on-camera flash is a bad idea.

But as with all baby animals, Amirah eventually grew up enough to leave her mama and move to another zoo to meet a boy tapir and hopefully make more babies. Malayan tapirs are endangered in the wild, so increasing genetic diversity in the captive population is extremely important. So I had to say goodbye to my no-longer-little tapir friend... 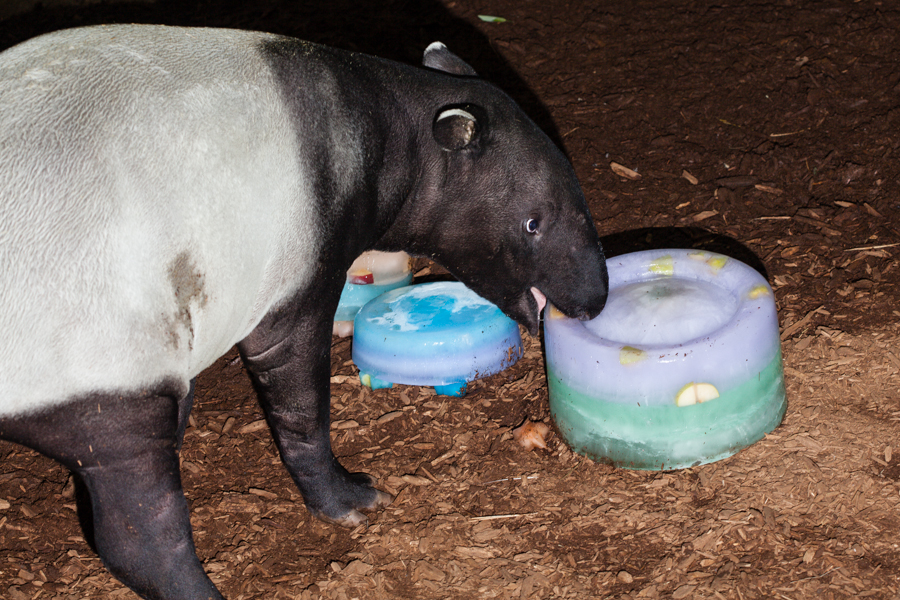 Thankfully by this time I had figured the flash thing out.

Ketawa was born in the summer of 2015, and I started the whole process over again. While they had different personalities, in many ways the process was the same. Ketawa would come out, and I'd photograph him while he ran around for half an hour. Then he'd go to sleep and I'd go do something else. 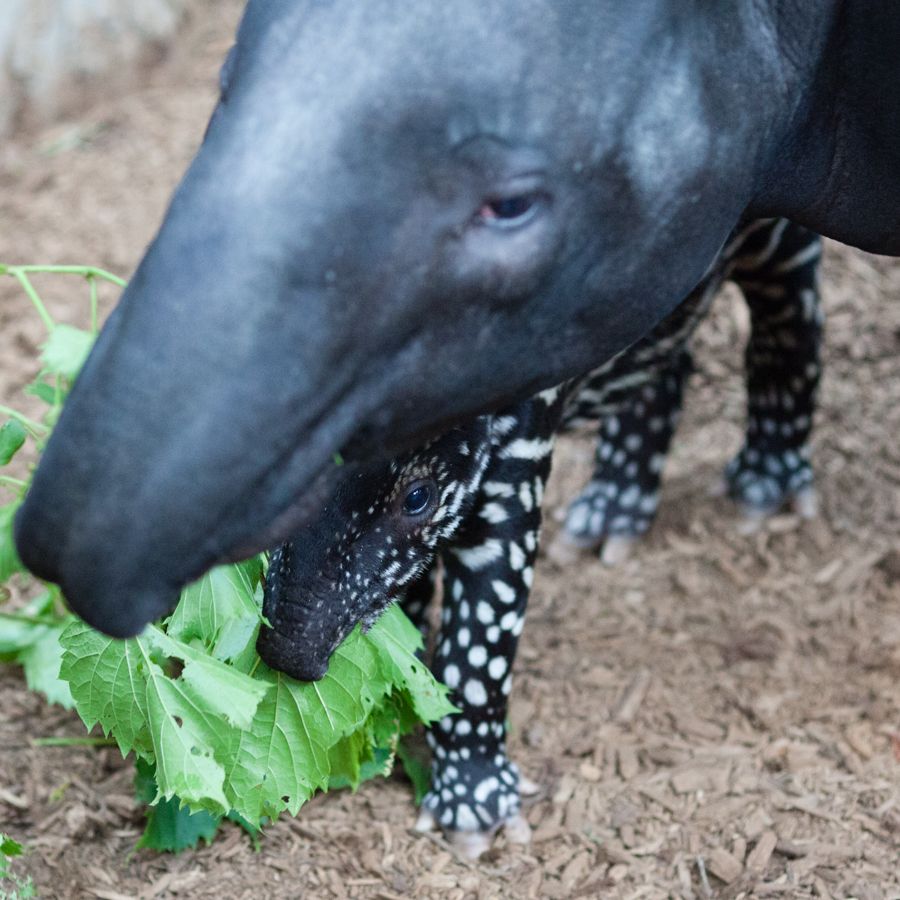 But just as his sister did, he grew old, he grew large, he lost his spots, and he had to move to another zoo. So I had to say goodbye to a second tapir friend... Closeup of Ketawa's coat
I restarted the Tumblr with the new baby photos and repeated the process, with two years' experience hopefully leading to better photos. I wasn't as long or as dedicated at following him as I was with his sister, but I still ended up with thousands of photos. 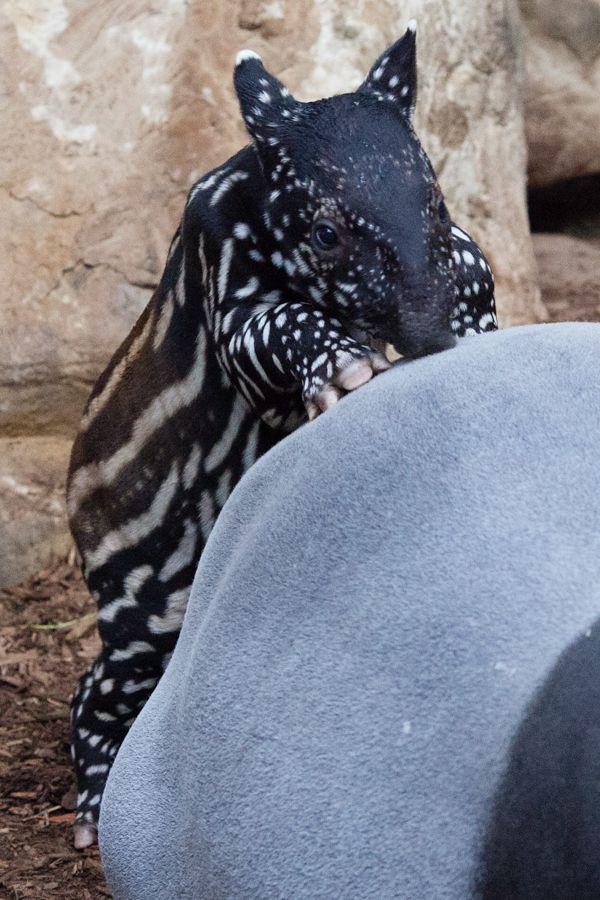 Mom is the tapir playground.
...and hello to their little sister. Last one I promise.

Indah was born in January, and the plan was for round three of the project, but her health didn't cooperate. She took sick after only a few days in the public exhibit, and had to be kept under veterinary supervision for almost two months. So I only have a few days of baby photos. Thankfully she's healthy now, but by the time she came back out her coat had largely changed. 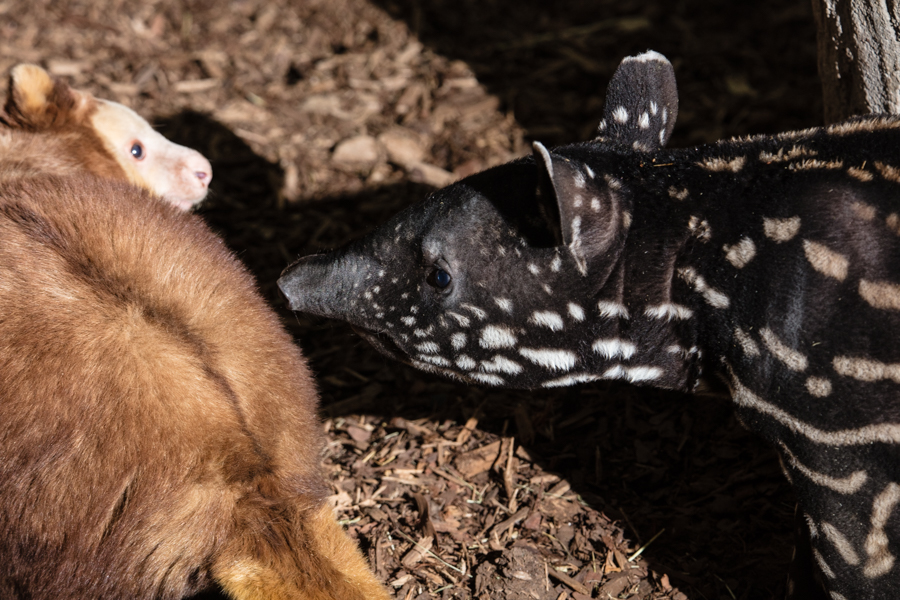 I did get to see her discover the tree kangaroo though.

Through the Tumblr and other community connections I got to meet some other tapir enthusiasts, and in November I got to attend the every-three-years convention of tapir conservationists throughout the world, which was both fun and educational. I even got to stop and see Amirah in her new home in Texas on the way home. (Like a good adult tapir, she was sleeping in the least-visible corner of her exhibit.)


If somehow you've gotten this far and are thinking that you haven't seen enough photos of baby tapirs, then one, you should know that I love you, and two, you should know that I took the 300 best photos of each of Amirah and Ketawa and made them into coffee-table books: Amirah: The Life of a Baby Tapir and Ketawa: The Life of a Baby Tapir. They make great gifts for people unhealthily obsessed with animals of all ages! Amirah is skeptical of this idea.
animals tapir photography animalphotography
3년 전 by tcpolymath68
$276.37
122 votes
댓글 남기기 35
Authors get paid when people like you upvote their post.If you enjoyed what you read here, create your account today and start earning FREE STEEM!
STEEMKR.COM IS SPONSORED BY

That is a really nice looking tapir, Ive never seen a spotted one like that :)

I, too, have never seen a spotted

This is really a learning post. The pictures are also amazing. I enjoyed a lot by reading your post. Thanks for sharing.

what an amazing set of pictures and quite ambitious project you had on your hands by documenting their development. It's amazing when you get to meet people who also share your same passion :D

cute little spotted tapir! ive gained knowledge about them, not really familiar with their species.

Interesting colors that the baby Tapir has. Do they change as they get older? @tcpolymath

They do. You can see Amirah changing to her adult coloration in the later photographs in her section. The white saddle starts to come through very quickly, and then the spots fade, so at 9 months or so they look like small adults.

This is a great article. I really enjoyed your tapir photos and information thank you for sharing.

So cute the baby Tapir, I never had seen some like this, I love all your picture and the information, thank you for sharing

I've never thought they would be so adorable! Amazing and lovely photography :)

Very well structured post!! Looking ahead for more great contents from your side in the future.

I love the animal and animal photography.

Congratulations @tcpolymath! You have completed some achievement on Steemit and have been rewarded with new badge(s) :

Hi ......@tcpolymath
It's great to read your post.
I could learn something new.
I'm with you. Hope you and me stay together.

Thank you
Come up with something new in the future
Please Follow Me Hope to be with you.

Very beautiful and sweet photos. I feel the love.