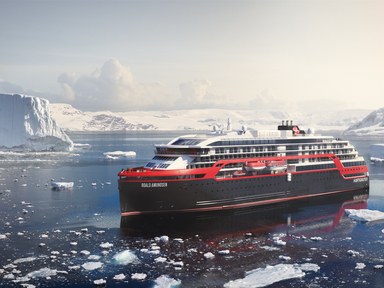 The below post I originally published at Architectural Digest, by I think it's catchy and worth sharing so, I decided to share it with you all, Enjoy.

The world’s first custom-built hybrid-powered expedition ship, MS Roald Amundsen, debuts the summer of 2019 with a unique hybrid propulsion technology that will allow visitors to explore the polar regions in a truly eco-friendly way.
The ship is curated for art lovers: Unique works by young Norwegian artists, handpicked by the Queen of Norway’s art foundation, the Queen Sonja Print Award, will grace the Amundsen, owned and operated by Hurtigruten, when it sails its maiden voyage next May. Visitors can find multiple prints in all suites and cabins and can gaze at them in public spaces including restaurants, staircases, and corridors.

“There are 600 works on the ship, and more than 300 works are made by young printmakers,” Queen Sonja tells AD. “Graphic art is a great art form, because it is the most practiced and accessible,” she adds, saying that the art of printmaking deserves recognition. Since the print award was first established in 2011, three outstanding artists have received the prize.

a large open deck with an infinity pool 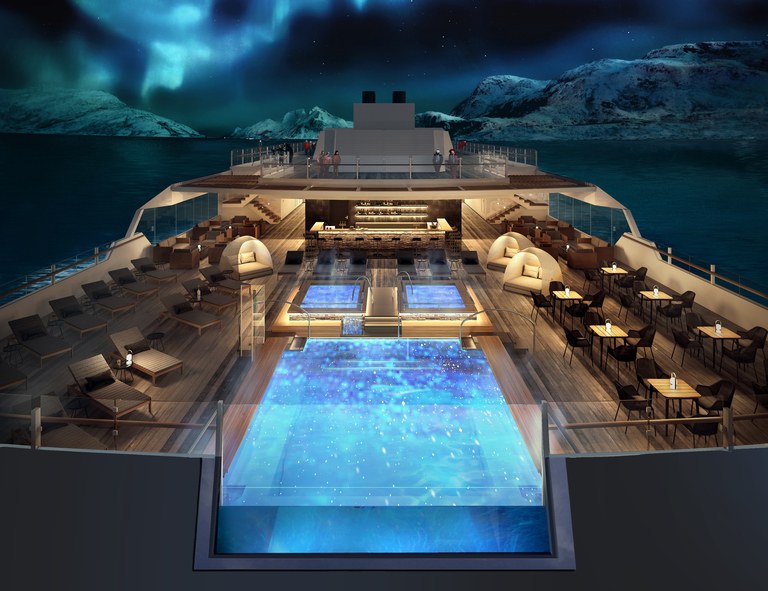 Outdoor observation decks, including a two-level forward-facing explorer deck wrapped around the bow and an aft top deck pool bar with an infinity pool, will offer sweeping views of glaciers, ice caps, and wildlife. Geeks can delight hanging out in the high-tech Science Center, the onboard headquarter for the expedition team.

All 265 staterooms and suites have ocean views, and most have private balconies. One of the ship’s newest technologies will be the use of underwater drones developed by the Norwegian startup Blueye Robotics.

“The ship leaves a smaller footprint in the areas we explore,” says Thomas Westergaard from Hurtigruten's Hotel Operation & Product Development team, referring to the battery packs that allow the ship to clip large distances without leaving any emissions.

architecture news ship technology blog
3년 전 by bestsmiles36
$0.00
2 votes
댓글 남기기 1
Authors get paid when people like you upvote their post.If you enjoyed what you read here, create your account today and start earning FREE STEEM!
STEEMKR.COM IS SPONSORED BY