"May the Fourth be with you". Today I am celebrating Star Wars by sharing an illustration I made years ago when I was still at work on the Raising Dragons Graphic Novel. The idea was to make a parody of the classic Star Wars A New Hope movie poster and insert characters from the Dragons in Our Midst fantasy novel series. It was surprisingly easy to find characters to fit the tropes. First of all, Billy Bannister was definitely going to the Luke Skywalker, the protagonist in the series. The fact that his sword, Excalibur even lights up in the books makes it works so well since I gave it the iconic green lightsaber glow. Bonnie Silver is Princess Leia, a character who has strong faith in the supernatural but can take care of herself when push comes to shove. Billy's go-to bud, Walter Foley, is the hotshot Han Solo. Seeing as Walter is a geek-culture enthusiast, I think he would chose to dress as Han if given the choice. Looming in the background is the dragon slayer, Devin. I cast him with a heavy shadow to conceal his face and give him that Darth Vader sinister vibe. Devin is holding the candlestone instead of his red lightsaber. A moon with dragons flying takes the place of the Death Star and Tie Fighters. Since Professor Hamilton wears a long brown coat, I decided to give him an ammunition strap over his shoulder and he completes the Cewbacca look, especially with his naturally unkempt hair. Arlo Hatfield is tall and lean, so I colored his clothes gold to make him a C3-PO stand in with his dog, Hambone, the blue tick hound, serving as R2-D2. The wizard Merlin was a great choice to use for the old Jedi Master, Obi-Wan Kenobi. Although King Arthur was not a villain, I used him in place of General Tarkin. Looking back, it would have made more sense to use Devin's squire, Palin, as the substitute for evil second-in-command.

I really believe fans of the Dragons in Our Midst series will really appreciate this parody. Raising Dragons may be a contemporary fantasy while Star Wars is really a fantasy series that takes place among the stars. Jedi are just space wizards, am I right? Happy May 4th everyone and stay safe! 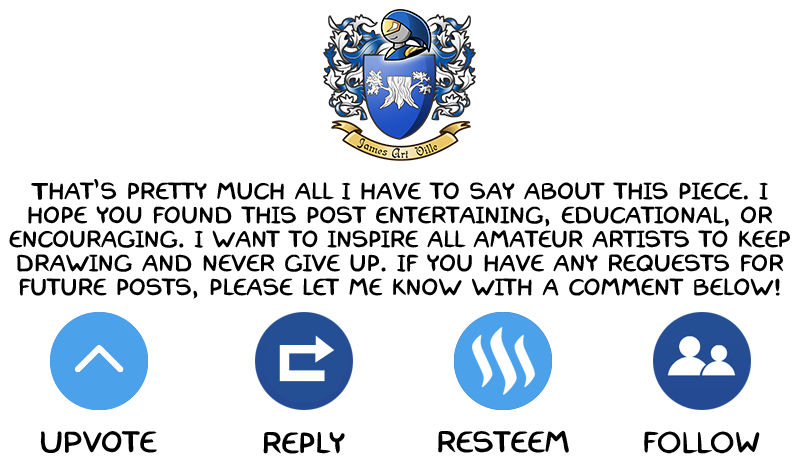 art artzone artshares steemartists starwars comics parody drawing
작년 by jamesartville62
$5.97
610 votes
댓글 남기기 3
Authors get paid when people like you upvote their post.If you enjoyed what you read here, create your account today and start earning FREE STEEM!
STEEMKR.COM IS SPONSORED BY

Hi James, first of all seeing your work I was very surprised to see so many different character and they are all nicely placed and building up the harmony. Reading the text I had to return on and off and look again at your creation that of course made everything clear who is who and why. Somehow for me the most precious work is always in initial sketch planning and you did it very well!

Thank you for your thorough observation. I think the pencil sketches are always precious because they contain more emotion. They are raw, searching lines discovering the drawing when overlapping at the right points.