Here's another painting I just did for myself, a bit more ambitious than usual, basically just spending a lot of time on the details, especially the environment, which I don't usually do.

The story behind I kind of made up after I had the initial idea, that happens with me a lot (the visual comes first). Two fairy sisters, the younger jealous of the older, who became Queen and married the handsome goblin prince... this could actually be the redhead Fairy Queen I painted on the swing, another painting you can see in my blog if you scroll a bit further down. 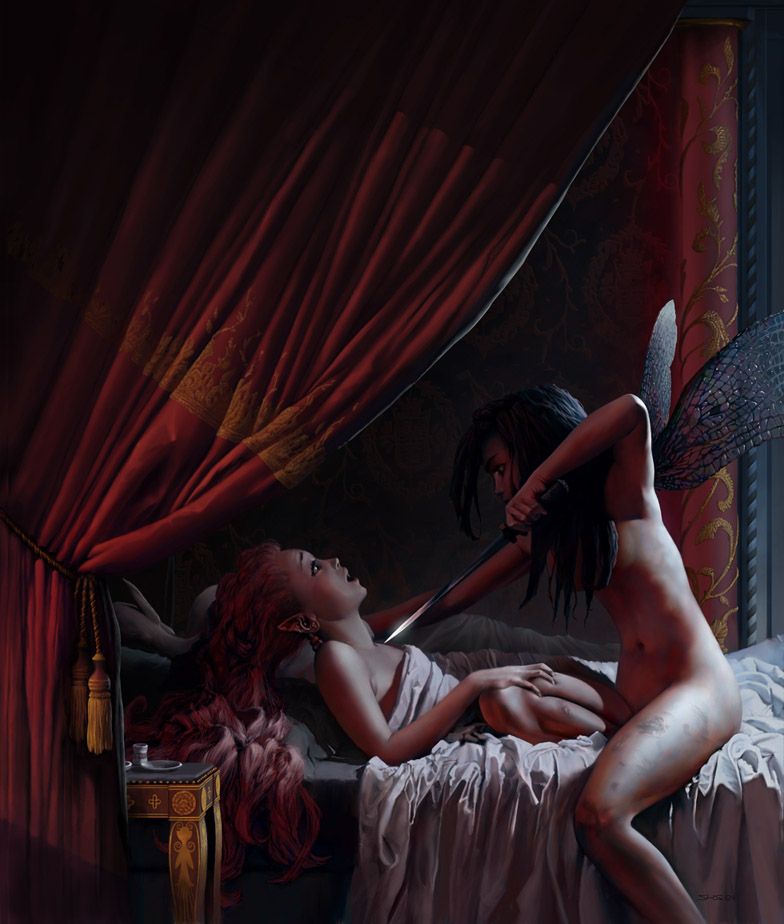 Here are some of the steps. First a scanned sketch, which originally was quite small. Then I painted on that in Photoshop, into a grey-scale version 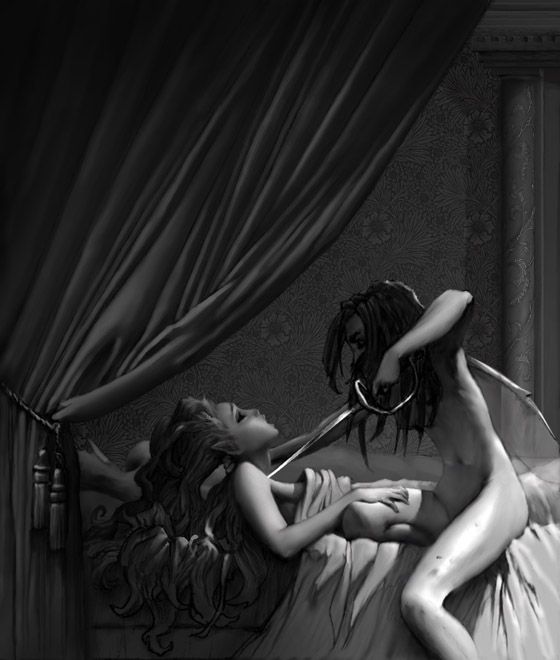 Then I colorized that And finally painted with more opaque paints on top. 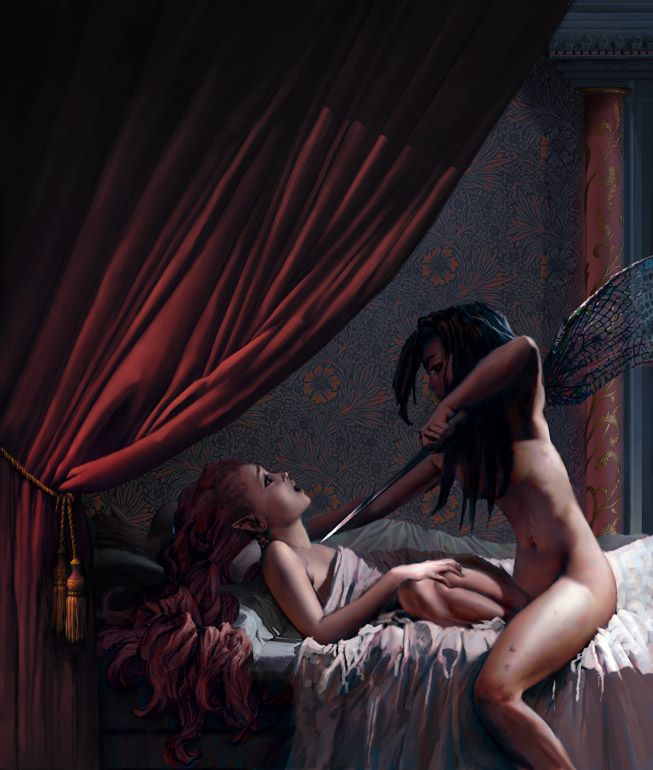 In case you're wondering why I keep tagging TeamMalaysia, this one was painted in Kuala Lumpur :)
I hope you like it, thank you, have a great day!

art mspsteem fineartnow ocd-resteem teammalaysia
2년 전 by stahlberg61
$52.16
68 votes
댓글 남기기 35
Authors get paid when people like you upvote their post.If you enjoyed what you read here, create your account today and start earning FREE STEEM!
STEEMKR.COM IS SPONSORED BY

Beautiful work @stahlberg
This reminds me of artwork by artists I used to follow on Deviantart!
Thank you for sharing.
Upvoted and following

See? This only confirms fairies are evil! Violent! 🤭

(Yes I'm going far back into your archives because your work is entrancing.)

I've come across this image before on some art or imageboard. I think I even saved it somewhere, because it gave me the inspiration for a story.

It's so cool to discover you're the artist, and to meet you on Steemit!

Thank you! it's rare to meet someone here on Steemit that has seen my work before... and even remembers it. Nice to meet you. :)

Hi, Steven! I followed you for years and thanks to you i am now joined Steem ;) I like raw scanned version more, this doesn't mean colored version is bad, i like it! Good work!

Totally breathtaking @stahlberg. I particularly like how you play around with the shadows and the light on the skin of the young jealous fairy. Upvoted!

I agree, great work ... wish I could draw like that

The dark spots on the left leg. What's that mean?

I was thinking she crawled in through the window after climbing the wall, or something like that... so yeah it's meant to be dirt :)

Wow man! It looks great. I wish I could make art like that.

you must meet us the next time you are in Malaysia

Wow we shld meet up...how do i contact u?

I found you on discord

Awesome! Come join our upcoming #teammalaysia gathering this Saturday if you are available

Great! Have you signed up yet? If not, here is the registration form

I can't seem to take my eyes off it. Just great

Just wow! You are mega talented my friend, I cant wait to see more. The black and white is my favorite, so raw but they're all just fantastic

Beautiful work. On first glance I thought it might be a dark take on the Peter Pan mythology with a jealous Tinkerbell threatening Wendy!

ThanksThat's such a good idea, better than mine lol

Tiny little winglets! XD I'm curious about the marks on murderous fairy's leg, did she hurt herself or just has some interesting skin markings? I love the skin tones! And the background detail is quite...delicious is the first word that's popped into my head, not quite what I was going for but seeing as I currently can't seem to find the word I want you're stuck with the silly one, sorry XD That cascading red hair is beautiful.

Thanks! It's dirt on her leg, I guess I pictured her crawling through ducts or up a wall to get there... or maybe she fought the guards... something like that :)

Wow, that's amazing I thought it was a 3D render, very realistic painting

Hey Steve, nice to see you on steemit. I'm a huge fan since I've been started working as 3D artist. Your art 2D/3D is always inspiring and a motivation to get better and better. This one is one of my favorite works beside 'One more time' and 'Abduction'. Keep it up!

wow, thank you so much, it's so exciting to meet people who've actually seen and remember other of my pieces, let alone like them! Astonishing, and exciting. :)

This post touched botty's mechanical humanly heart, and you are selected to feature in the @Rougebot's Curation post Link here.

Well Done Human, join this bot and other humans in this Discord Server for MSP [Minnow Support Project]

is this hand drawn , its quite a piece keep up with the talent

Yes it is hand drawn, thank you very much! :)

Its perfect, Did great job, Thanks for sharing @stahlberg