Sun energy makes you aware of yourself. It's the conscious confirmation that you exist as a distinct, individual being. And Leo thinks about itself constantly. See where this combination is going?

Some say Leos are egomaniacs, self-centered narcissists ... and compared to, oh, the modesty of Pisces, they've got a point.

Let's say Leo is intensely ... and yes, even excessively ... aware of himself. He craves attention. He relishes applause ... and never doubts he deserves it. He hogs the spotlight every single time he can grab it.

He is self-absorbed like few others you will meet in this life, and he can be insufferably arrogant and dramatic if he feels neglected or dissed. And yet, there is something so honest about that.

Sometimes, sure, he tries to soft pedal this trait ... if only so he can charm the other people he needs in his audience. Sometimes he succeeds in toning it down (just a little.) But it's not from any sense of fair play, or whimsical notion that maybe he's not the most magnificent thing to hit the planet since sunlight.

It's so he doesn't alienate anyone who might pay him a compliment, especially one others might hear -- or someone who might become part of his fanbase. Leo simply needs an audience -- and spends a considerable part of his time and energy collecting one.

That advice about, "Your playing small does not serve the world. There is nothing enlightened about shrinking so that other people won't feel insecure around you" -- Leo doesn't need that speech. (I secretly suspect some Leo somewhere probably wrote it!)

Leo never played small in his life -- and at the end of the day, his example is one we could all learn from. How much would that benefit the world? Yeah, I know. Glorious thought, isn't it? So, while the strength, candor and confidence of Leo energy is available, ask yourself ... who are you? And how can you show it? How can you use this for the good of your community? Acting on those answers might be the most important thing you do ... ever!

Make this the year you start fresh ... and do it better ... do it right. Become yourself!! Live from now on as that person!

Treat it like a horoscope or fortune cookie reading.
That's how it's designed ... but do pay attention to it.
I promise you I am -- because they make so much sense! It's time to let go of something that is making you miserable -- or at least reducing your happiness and contentment ... significantly. astrology tarot thealliance psychology life
2년 전 by enchantedspirit66
$3.84
217 votes
댓글 남기기 4
Authors get paid when people like you upvote their post.If you enjoyed what you read here, create your account today and start earning FREE STEEM!
STEEMKR.COM IS SPONSORED BY 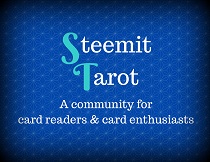 Hello from the Steemit Tarot community!

@steemittarot began as a way to curate all the Tarot Tuesday posts that starting popping up on the site. Now the hope is to connect all readers, people interested in learning about the cards, and other assorted people bearing good juju.

To this end, your post has been resteemed and/or upvoted. To find out more, check out the intro post here.

@enchantedspirit Hey such a nice and informative post!!!! Love to go through such posts. Really interesting!!!!
Keep up the good work!!!!
Wish you luck =)
Keep going✌

Congratulations @enchantedspirit! You have completed the following achievement on the Steem blockchain and have been rewarded with new badge(s) : @enchantedspirit, sorry to see you have less Steem Power.
Your level lowered and you are now a Red Fish!