Astrology for Beginners (Part 1) - How to understand an Astrology chart 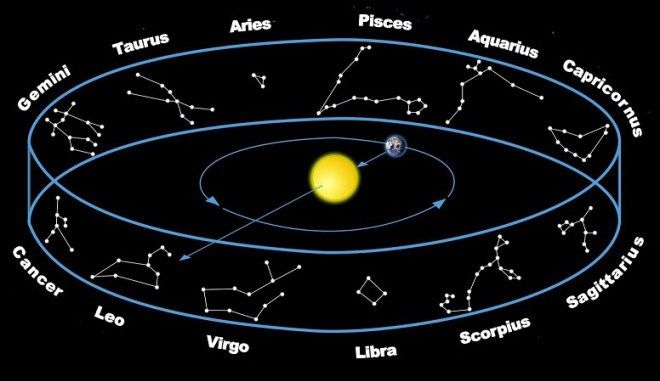 I will be honest. Proper Western astrology, the type I study is a complicated subject. It is in no way as simplistic as the horoscopes you see in the newspapers. That type of presentation was devised in 1930 as a way of making the subject suitable for the daily papers and magazines. It has a 1 in 11 chance of being even slightly close to being correct. Put it another way, 11 times out of 12 it will get things completely wrong for you. It is overly simplistic, and has lead to Astrology wrongly in my view being seen as a joke subject, derided by those who know little about it, compared the real insightful fascinating subject that I study, practise and display through my work.

With all types of Astrology, the Solar System is divided into 12 equal sections, from the first Sign Aries through to the last in the series Pisces. These signs are based on the 12 constellations that ring the Earth and that the Sun traverses through the year. The Sun hits the start of the series Aries around 21st March. That where the similarities between "Newspaper" or "Sun Sign Astrology" and the Astrology I study end.

The Astrology I look at on this site, features all the known planets spinning around the horoscope wheel, that also moves. The Horoscope wheel is a clock & it turns near to 360 degrees in one day, just like a normal clock would. If at midnight on the left hand side of the chart (9 o'clock) the horizon line is at 1 degree Aries, by midnight the next day, I know that the horizon line will be again close to 1 degree Aries. On a technical note, Astrologers follow Sidereal Time to reflecting the Earth's rate of rotation measured relative to a number of fixed stars, which is close to the time we use but varies by a small amount to reflect the actual Solar time.

The wheel I use is location specific. Astrologers work out what sign and degree was on the horizon at any particular time. This can vary depending on what part of the earth you are on. We then take all the planets and following an ephemeris which tracks their orbits around the Solar System, we plot them onto the chart. Below you can see a pictorial representation from the perspective from the Earth. The Horoscope Wheel is inverted to your normal compass, and has a horizon line across it. Imagine the top of the chart as South, the bottom is North, the left hand side is East and West on the right. This East West axis reflects the horizon on the earth. The Ascendant (East) is on left side of the wheel and reflects as what you would see if you look East at the time and place where the chart was made for. Here as the chart spins in time with the Earth, the planets and Sun rise over the horizon, and the Descendant (West) shows where the planets and the Sun set.

The natal chart is a chart taken for the date, time and the place of birth. It stands to reason that two people born on the same day and the same time but in a different places on planet earth will have slightly different relationships to the planets and energies surrounding them. This is one of the reasons we are all different and as such our charts are unique. Even people born on the same day in the same place but 5 minutes apart will react to the planetary energies slightly differently, because the earth would have spun on it's axis, thus altering the ascendant degree and thus our relationships to them. The Ascendant degree progresses on approximately 1 degree for every 4 minutes of time. 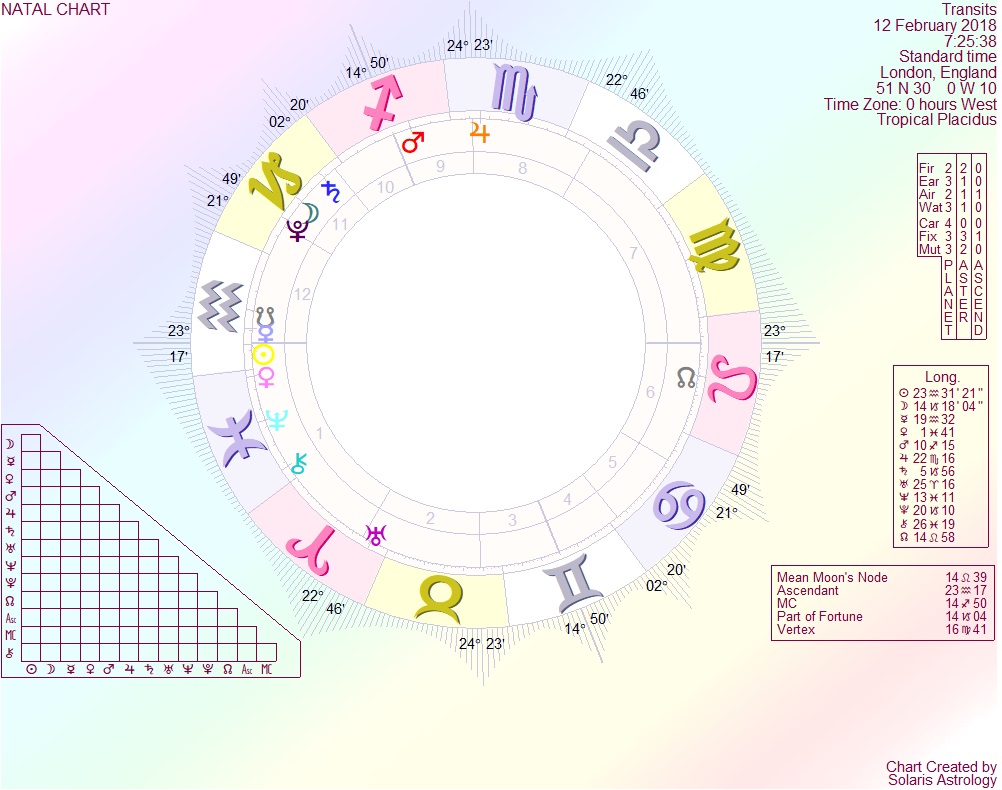 The chart I look converts to a horoscope chart with the planets dotted around. This is a basic chart for sunrise on 12th February 2018 earlier this month located for London - the Sun rose at 07.25 hrs. You can see the Sun (in Yellow) on the horizon just about show it's face in the sign of Aquarius. If you had been up early this particular morning you and looked to the East, you would see Mercury (in Grey) rising just before the Sun. The Moon would have been visible too at sunrise still above the horizon. Get the idea? I've now moved the chart you saw earlier on to 11.00 am for London. You will see that all the planets have moved around in a clockwise direction and now the Sun (in Yellow) is now high in the sky in the 10th house still preceded by Mercury and followed by Venus. You'll also notice that Mars at this time was setting on the Western horizon. If you were to move this chart on again to 17.30 hours, the Sun would be at the Descendant (Western Horizon) and setting for the day.

As well as dividing the sky up via the constellations, we also divide up the astrology wheel into 12 sections, or houses. These can vary in size, depending on the longitude and latitude of the location of the chart which is set, and the particular preference of the Astrologer. The subject of houses causes more debate between Astrologers than any other component of the chart. Most astrologers when they are starting out use the equal house system, where each house is exactly 30 degrees in size. The bottom of the chart or the nadir, Imum Coeli (IC) (in Latin - effectively bottom of the sky) is the point where the 3rd house ends and the 4th starts. The Midheaven (MC) point is at the top of the chart, or at end of the 9th house and beginning of the 10th. The Ascendant, Imum Coeli, Descendant and Midheaven make up the 4 angles of the chart, and are very important points in the development in our lives when a planet is found connecting to them, or moves to connect with them. The Ascendant shows our personality in a way that only those know the individual very well will recognise, and the Midheaven shows our world progress in life; our professional direction.

Each house connects with a different area of life, each planets has different qualities and each sign colours the planet with differing characteristics. The astrologer looks at each planet individually and in combination, and through thousands of years of study, we generally know how people born with planets in different signs and in different houses will react. For example, with the Sun in Virgo, a person with be interested in the minute details of anything and everything, will be a little nervous in general, will be critical, down to earth, hard working and practical. The Moon will take on these traits too, but they will be expressed through one's emotions. Mercury in Virgo again will take on the same traits, but this time they will be expressed through the mind, and through communication.

By looking at the planets and where they are by sign and by house, we get the basis of the personality. The Astrologer then looks at the relationships between the planets, themselves and the major angles (Ascendant and Midheaven). Study has taught us that when a planet makes an angle to another, they react in a certain manner. Planets that conjoin see their qualities merge. For example if Mercury conjoins or conjuncts to Mars, we can safely say that the mind and communication (Mercury) will be forceful and direct (Mars). The other major angles we look at are 60 degrees apart (Sextile), 90 degrees apart (Square), 120 degrees apart (Trine) and 180 degrees apart (Opposition).

Below is a chart for 26th February in just over a week's time, I've set it for the same time as the first chart I put up and you'll see the Sun is well above the horizon, thus because it rose earlier. You'll see that the Sun and Mercury have moved into Pisces and the Sun is now rising before Mercury and Venus. I have added in the aspect relationships to the chart so that you can see them. I use a slightly different system to normal astrology charts. The colour system I developed revolves around the spectrum. Easy aspects where energy flows well (sextiles and trines) are in warm colours, red, orange. Blockages and tensions (squares and oppositions) are in cold colours, blues and purples. Conjunctions where the energies of the planets are combined are in yellow. 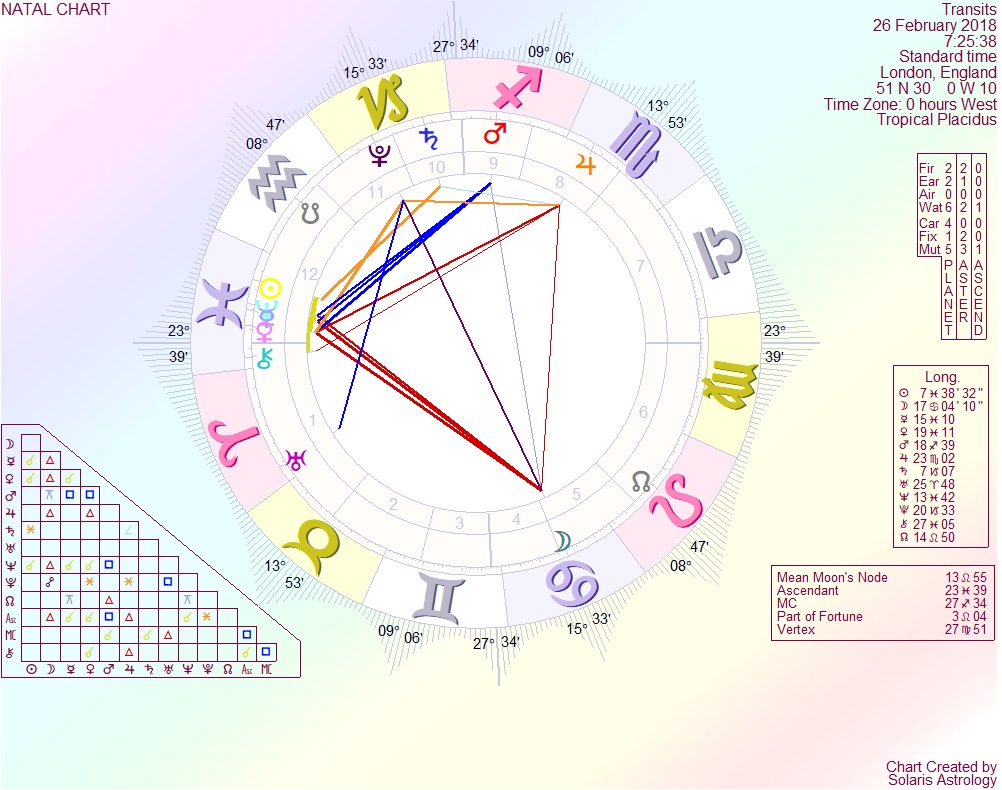 In this mini guide, I have tried to explain how I go about looking at an Astrology chart. As we know the movements of all the planets from the past and in the future, we can see how the planets affected people by plotting the current positions against the ones at birth, and looking at the relationships between them. Astrology of course allows us to try to predict future reactions to planetary movements. There are other techniques used like progressions, solar arcs, midpoints, and harmonics.

Anything with a start date can have an Astrology chart. Not only people, but businesses, countries, events like earthquakes and disasters. You name it, astrology can dig beneath the surface of any person or situation that has a start date, time and place.

In a few days time I will put up part 2 looking at the qualities of the planets and what they all represent...

astrology planets stars signs horoscope
2개월 전 by solarisastro55
$0.00
댓글 남기기 0
Authors get paid when people like you upvote their post.If you enjoyed what you read here, create your account today and start earning FREE STEEM!
STEEMKR.COM IS SPONSORED BY