I'd only slept a little after our first Ayahuasca ceremony and I was still feeling positive and happy - and willing to engage with people. It was early and I was expecting there to be a Yoga session but my enthusiasm was out of step with the others - who generally needed to make up for such a late night by sleeping in. But they did start to appear and breakfast was even more welcome than usual. It was a very relaxed day and Macey had scheduled two massage therapists for us so that the relaxation could really sink in. While this was going on we all gathered to share our experiences and any insights that were emerging.

Our second ceremony was at the end of the following day and I'd chosen to fast in preparation for it. This experience turned out to be completely overwhelming for me. The Ayahuasca tea was thicker this time and when Remi asked me if I wanted the same dose or a little more, I agreed to try just a little more. I hadn't decided on an intention until shortly before the ceremony ~ To do the hard work that always needs to be done. But I did focus on it leading up to my turn to drink and in the calm twilight just afterward. I don't recall if I closed my eyes before or after Remi started singing but it started with the same subtle hints of the visuals I had last time. I started to anticipate another gentle, playful experience...

The vague, foggy visuals partially resolved into a distant cosmic eye and the iris traversed from right to left ~ at least from my point of view. It did this again but with a little peak in the middle ~ and the whole image was becoming more defined. It was the eye of an attractive woman and She was rolling her eye at me as if to say, 'Can't you figure this out by yourself?' 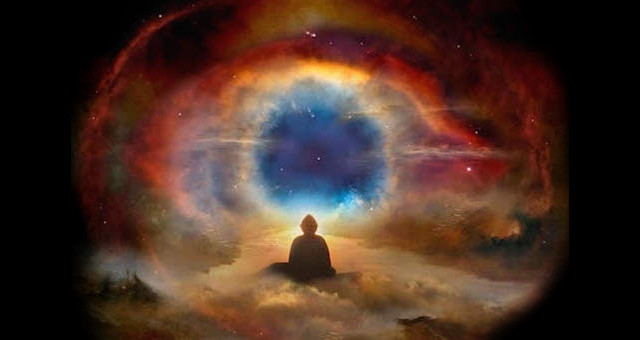 I was amused by her disdain but perhaps I should have been more mindful of it instead. It was also my intention to have a more sober, adult conversation with her but I didn't hold onto that intention. I was too drawn into what is still a novel new experience for me and too greedy for more. Vivid colours came and my ordinary sense of time and space changed out of recognition. I thought I was just going with it but I either went too far or not far enough. I have some recollection of going into the colour and either losing my familiar, physical self or simply becoming colour ~ and it was as if I had some kind of relationship with the colour. We didn't always get along ~ She, as colour and pattern, reared at me like a cobra. A very angular and impressionistic cobra but, none the less... I may have placated her or She may have relented and that particular sense of a place changed. I had a sense of seeing some interstellar colour reality and also being a subtle shift away from the room with the ceremony and the singing. I suppose this resolved itself into a sense of being awake and being asleep but I couldn't tell them apart. There were some jarring colours and shapes that weren't at all complementary ~ it really didn't seem like they belonged. I don't know how I woke up ~ it seemed like my eyes had been open all along. Ashley was in front of me and she was saying something. I had to ask her to repeat herself ~ she wanted me to make less noise. I was confused about that ~ did she mean the noise I made to ask her to repeat herself? And even that seemed like it was all a proper part of the experience. Or was it? I wanted to let her know that she could go back but I also wanted her to stay and talk ~ and I had to communicate that without talking... Or was communicating without talking also talking? Was I talking by thinking about this? Was I talking by looking at her? What was my bucket doing in my hands? Was talking something Ashley did or something that I did? Were we the same person? Did I exist at all? Was I vomiting into the bucket? Or onto the floor? Or onto my shirt? Was vomiting talking? How do I stop vomiting? Did I ever not vomit? Was spitting and drooling into the bucket talking? Was this the ceremony? The beautiful ceremony? Could I stop if I wanted to? Could I just make a choice to not be sick? It seemed like I could but then I became confused between choosing and not choosing...

My hands knew I was holding the bucket but my mind thought it might be on the floor. Between my hands and my mind there was an agreement ~ my hands would hold the bucket and my mind would focus on going outside. Except I couldn't tell where that was ~ inside and outside seemed the same and both distant and very near. Perhaps standing up would help ~ although standing on my knees wasn't quite enough. I got to my feet and they took me to the door and outside ~ at last! I emptied my bucket and tried looking at the stars to see if She would join me like last time. It seemed darker than last time and even though I was walking around in my familiar world with my eyes open, there was an overpowering sense of unreality. There were also one or two other people outside...

All of this is to try to convey just how taken over 'Matthew' was. Some of us, myself included, has asked for less electric light but I don't think we anticipated such strong medicine. With less external sensory information, more internal sense or imagination can and did fill in. I'd gone to speak to Macey, who was in the well-lit bar area and it still took quite some time and determination to express anything. She said I should follow her back in for my personal Icaro but I'm not sure if I actually made it that far even though it was quite close. I did go back in and I was eventually called to sit with Remi. I was certain that I could hear whispers and water dripping and echoing - it seemed like I'd gone into a cave... Remi and Ashley both asked some simple questions but I was having the same difficulty to respond. Remi began to sing and Macey added her voice in places as well. It was beautiful and I was grateful. I had been feeling a powerful sense of gratitude during all the singing while I had stayed inside - even through all my confusion and discomfort, so much so that I was even grateful for that aspect of the experience I was having.

Part of me, somewhere, may have been ashamed or at least concerned that I was still vomiting ~ I certainly still had my bucket held firmly. Either before or after that I was outside actually trying to claw my way back to a more familiar degree of control over myself. Again, there was an idea that I should simply be able to choose to do so ~ that I could just choose to snap out of this overpowering experience. This was part of the sober, adult discussion I had sought ~ not that I knew then that this was how such a discussion would be carried out. Using will power, making a choice and seeing it through is entirely part of the hard work that always needs to be done. She wanted, and wants, me to demonstrate my will power. She relented a little ~ enough that I thought there was a possibility to put down my bucket (or at lease hold it away from my face) and go back inside. I was better able to tell the difference between inside and outside but I wasn't convinced that it was appropriate for me to rejoin the others for the rest of the ceremony. I wanted to at least make sure that my bucket was cleaned out and that my face and hands were clean. I wanted to be free from that vomit smell... I managed to do that and go back in to my place. I lay down and listened to Remi and Macey singing and tried to contemplate her challenge to me ~ the actual meaning of my intention.

Remi eventually closed that part of the ceremony ~ the simple, happy way he says 'Finished' is lovely. There were two more songs but those ones were for everyone to participate. I remembered her telling me to sing and dance in the earlier ceremony but I could only manage to sit up a little. Macey went around offering fruit and Ashley came to talk. I was very grateful for that opportunity but I was still somewhere in the midst of the medicine. One of the others motioned me over to him ~ it was good to talk to him too. He was also still somewhere inside it. Eventually I went back to my place and ate my banana and drank a little water. I was exhausted but that banana gave myself and the medicine a little more energy. I lay down to sleep and dreamed myself right back into the ceremony ~ perhaps the parts I had missed while outside... I woke, not at all rested but I stayed there a little longer. There were still hints of visions if I closed my eyes.

The night was over and I went for a short walk near the waves. For the rest of the day I had a very peaceful, reflective experience. The more I thought about it, the more it seemed like my ceremony continued ~ that She was still with me but that She had given herself over and, for all I knew, may have been having a somewhat overpowering 'Matthew' experience. Some interesting things ~ personal interactions ~ did happen that day and I mean to reflect more on them and pursue those interactions. I've also been trying to think of a way to compare and contrast the two Ayahuasca experiences I had at this retreat... The first was like sitting in sunlight to get warm. The second was more like staying there long enough to get a tan as there were longer lasting and quite rewarding after-effects. Both were valuable learning experiences and I will seek future low and high dose experiences - and be better prepared for them. ayahuasca bambuddha acapulco psychedelic
3년 전 by voluntary54
$0.79
13 votes
댓글 남기기 2
Authors get paid when people like you upvote their post.If you enjoyed what you read here, create your account today and start earning FREE STEEM!
STEEMKR.COM IS SPONSORED BY

Much appreciated. I wasn't sure if I should share this experience or how to write it but as I made my own notes it became clearer that experiences like this are also very valuable.