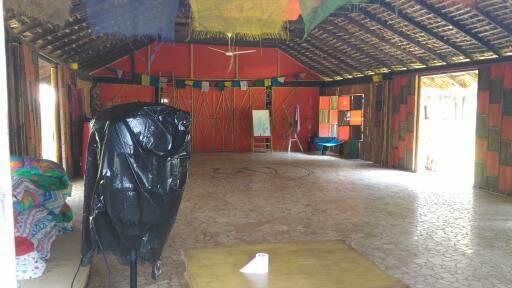 Part of the Ayahuasca ceremony that Remi has learned involves personal Icaros, which are songs from the Shipibo tradition, for each participant. He prepared for this by seeing each of us individually. Macey came to get me and I spoke with her, Remi and Ashley about my intention - a nascent desire to finally have my own family. The conversation also covered some past relationships, which wasn't something I expected to talk about but, none the less... Ideally, this would have been a more fully formed intention and I should have been especially mindful of it leading up to the ceremony. The more focus you can bring to an experience like this, the more instructive it can be. In addition to our personal intentions we were also asked to wear lighter coloured clothes - to externally reaffirm and give us that extra nudge toward the positive, introspective mindset that lends itself to a good ceremonial experience.

Once again, the ceremonial space had been set out for each of us and by sunset we came to get settled - good posture and deep, slow breathing together with our intentions was how we began. Remi spoke for a little while and gave a few timely pieces of practical advice to cope with the purging we might experience - from either end... ;) Macey called each of us to sit with Remi and he poured our 'tea' for us. When it was my turn, I took the cup from Remi and breathed it in - I wanted to be able to drink it all at once and not be surprised by the taste. For me, the taste really wasn't so bad and it actually went down rather well. I handed the cup back to Remi and went back to sit and remember my intention and wait. It can take half an hour or more for any effects to be noticed. The beginning for me brought some very mild physical sensations, very easily kept in check by deep, slow breathing. I kept my eyes closed and gradually started to notice the dark, murky imagination space behind my eyelids take on an entirely new character. It was so subtle but once it started, it didn't stop and I was excited and happy to finally see like this. The colours I saw were like the dark florescent, scrawling rainbow you see on a wet oil slick - lots of blue and green playing against a dark background. There was something like a peacock tail done in dark blue and green outlines with some fine, brighter highlights. I still don't quite have the knack for shifting my mind's eye and there were other parts of this vision that I wanted to focus on but I was still too attached to my physical, bodily way of doing things. Still, before I came out of this beautiful psychedelic dream, there was a central concentration of colour and pattern out of which emerged a green face.

There was a change, I was seeing something new and more distinct with a fuller spectrum of colours - the scene was something like an egg being fertilized. I was so taken with all of this that the thought of asking questions or simply trying to speak just wasn't there. But a thought did come to me which required a little interpretation -

She scribbles on the void

I understood so much more in those words and later I would unpack them into some more extensive written notes - that would also require more reflection and unpacking. But, to continue...

Think of scribbles as complex waveforms and the void is a canvas ~ it may be formless and black instead of white but that difference isn't important. By altering my perceptions to have these visions, I had spied her doing it and She (or something) had noticed the scribble that is me. She came to try to read that scribble ~ which created a union of the two. 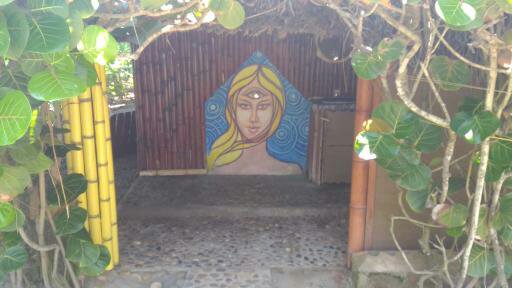 She wanted to play. She got into my body and moved it around. She liked moving although sometimes I had to slow her down - this was important so that I could retain the Ayahuasca I had consumed. She got into my mind and She had some fun figuring out the controls ~ She learned quickly and also wanted to speak my language. She thinks my language is funny and silly ~ even moreso when it accidentally gets something right. She wanted to try playing with humour ~ swear words were also funny to her. She told me that, 'Those motherfuckers invented the wheel (just a particular technology) and these motherfuckers invented Icaros'. Neither is better or worse than the other.

She also told me that the real miracle is that anything exists at all. What people think of as good or bad is just a preference. But it is important to us so we should choose accordingly. She made me laugh until I cried and I cried happy and sad together. She liked wiping those tears and my running nose with a handkerchief and then squeezing and relaxing the handkerchief. That piece of crushed and moving cloth was like an intricate, dynamic fold to her.

One of her messages to me but also for everyone was, 'Dry your eyes'. As in: It's time to stop grieving. For me, this pertained to my last relationship.

She spoke to me in my voice. At first I mistook it for my own internal dialog but I learned to hear her in that voice. We had a long dialog in a mixed language of words and colours and emotions. She would have allowed me to linger or retrace on a particular theme but I was content to move on with her. I wanted to know about the extent of my life ~ She told me that I will die when I am ready to die. I think it was Remi beginning to sing his Icaros that brought me back into the ceremonial space. Hearing sound like this, in this gently altered state of mind, was a fascinating new experience. My body wanted to move - just breathing wasn't enough, it wanted to sway and I wanted to let it. My arms and hands felt different and I tended to drag my hands over the thick mat I was sitting on and over myself as well. There was a sensation of bonelessness. She was very happy to hear her songs are still being sung and later I would mention this to Remi after my Icaro. During the ceremony we weren't supposed to but I had an intense desire to talk. 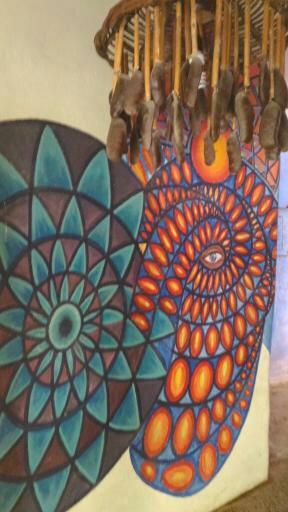 Macey started to sing with Remi. This really focused my attention (or the attention that was in me...) - it was profoundly beautiful. With my eyes open and being very present with our group, I wasn't experiencing obvious overlaid visual effects but instead incredible emotion was woven into my perceptions. My words aren't nearly sufficient to describe this... I could feel her staring out through my eyes, through the darkness trying to see who had such a beautiful voice - I was staring with a great, big, loopy, goofy grin. It was unashamed joy and surprise. When Macey stopped singing, She carried on in a choir of Macey's voice just for me and herself.

She helped me examine the death of my grandfather who I am very much alike. She would choose a word like 'resonance' to describe that similarity. What She had to say about my concerns of becoming a father and having a family (continuing the resonance) was that, even if I only bring a little joy to my children and my partner, it is enough because it is better than no joy and nothing at all. She wants me and everyone to scribble on the void. That's what it's there for. She wants me, specifically, to sing and dance (which will require a lot of practice or some very happy drugs...). She told me to at least consider going to Peru.

I asked her about some of the people that I see as doing harm in this world ~ She said they think they know more and better than anyone else and that they need to be shown how little they know.

Remi's Icaro came to an end and I had a sense of intermission. We'd been told to try to stay in the ceremonial space but She wanted more movement and more space. She wanted to see the stars ~ there were patterns in them, this night sky was alive and it made me laugh. She played with the stars and made them dance for me. She liked their gentle light. She helped me to acknowledge that my nature is to share and, importantly, there is more to sharing than just giving and offering to share with others ~ there is also accepting the offer to share from someone else. I had this idea that Matthew was having an Ayahuasca experience and that She (or something that came to me through her...) was having a Matthew experience. She had begun without physical form then went into me as an infant ~ wriggling my toes and rocking back and forth. Then She became a child and wanted to walk and talk. She became a young woman and wanted to look through my eyes and see the other people and the small community we had become. She matured and matured some more into an old woman ~ ready to hand me back to me and be more content to allow me to direct the experience She was having of this world.

Those of us that had taken smaller doses of Ayahuasca were, for the most part, back in our familiar minds and Remi, in his rather simple and delightful way of saying 'Finished!', had ended the traditional part of the ceremony. Ashley and Macey went around offering some fruit to each of us and gave us the chance to chat about the experience we'd had. Macey followed up with a couple more songs, including Iko Iko - which we all joined in on.

https://steemit.com/ayahuasca/@voluntary/bambuddha-ayahuasca-retreat-part-one
ayahuasca bambuddha acapulco psychedelic
3년 전 by voluntary54
$125.65
40 votes
댓글 남기기 12
Authors get paid when people like you upvote their post.If you enjoyed what you read here, create your account today and start earning FREE STEEM!
STEEMKR.COM IS SPONSORED BY

It is a very positive experience, I'm quite surprised how different my experiences were with Yage and DMT itself.

what a nice content! Part 1 of your writing has been a lot better. I came to understand this. This way you continue writing. Waiting for the 3rd part.

Part three is going to take a bit longer - that experience was much more intense and quite difficult for me to express. But the day after was its own kind of experience... ;)

Wow, this is where she went after visiting me! Lol .. I'm going back for that 2nd cup next time. I had similar and profound experiences too all in good company..

Yes - I had the idea that maybe She'd put all her joy into me and that everyone else was having a tougher experience. I'm glad it wasn't just me that had such a pleasant experience.

Glad that I found this. It sounds like a proper trip. Conversation with the spirit was probably essential to the whole experience. Sometimes you just find out things from them, they love to share the knowledge :)

This was beautiful to read, thank you for sharing this experience!!!! I am super excited to attend the women's retreat there this fall!