world war 2 correlated to bitcoin? A story of bitcoin and its sellers.

So this is more of a random thought i had recently. Basically i sometimes see similarities to world war 2, especially when something or someone just keeps pushing and pushing more and more, even though he really doesn't have any energy left anymore. This really reminds me of the germans in russia 1941 - 1943. So i wrote a little story, knowing the exact story of ww2. Maybe you can spot the silimarities if you know the real history :D 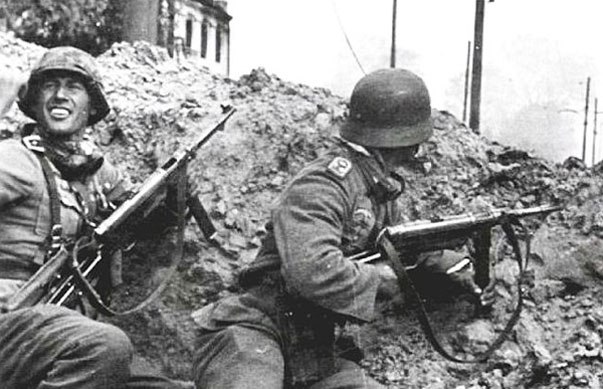 So basically we were starting the bitcoin offensive around 1.4k. The first months were huge for bitcoin! Climbing higher and higher, maybe some small dips at a few points but basically accelerating even. Bitcoin seemed unstoppable, invincible. But as bitcoin started to go more and more parabolic, it became more and more overstretched, was exhausted and couldn't go any further. So within striking distance of 3k, bitcoin season suddenly was halted and the price fell quite rapidly for quite some time, but bitcoin managed to reestablish its foothold above 2k and sit out the consolidation. After a lot of struggles, consolidation seemed to make the next move possible ans so all of a sudden, bitcoin is on the move again. Different than last time, a lot more dips and a lot more choppy. Bitcoin was feeling hopeful, the plan to go to 10k seemed possible again. There was even a big spike above the highs, but no buyers to capitalize on it to accelerate the move. So bitcoin got bogged down, attacking the 3k mark. it took a whole week to take out only 100$ worth of bitcoin, but finally after a long squeeze into the highs, 3k was reached.

However, immediately afterwards troubling news came in and bitcoin collapsed. The situation seemed hopeless to consolidate at those highs. So bitcoins price dropped left and right. Jihan Wu even said: "If we drop below 2.8k, bitcoin will never be able to return." But confused by the absurdity to buy into the immense sell walls and the panic growing at the look of their balances, the bitcoin traders started selling and some of them even shorted. A little later, a group of bitcoin buyers tried to reestablish and push back to savely release the 3k mark from selling pressure. It failed though and was only followed by more and more selling. The 3k mark was abandoned and now savely in the seller territory again. Bitcoin fell lower and lower.

But yet again, Bitcoin managed to reestablish, even push back the price a little. The bitcoin sellers were waiting for the price to move a little higher so they could unload all their bitcoin on the dip buyers. And that is what happened. The bitcoin community tried to buy bitcoin back up in a last effort to push price back to make the daily candle close above resistance.

And at this point.. we managed to do that and bitcoin is making new local highs. Which, i guess, would be the equivalent of Germany capturing Kursk and pushing back into russia again :D

But oh well, it's better than history turning out correct and we are dropping to 0.

Something different this time ;) I had lots of fun making this post, i hope you enjoyed reading it :D
Maybe you learned something about history even :D or bitcoin ^^

bitcoin cryptocurrency money crypto worldwar2
4년 전 by curlyhead43
$1.70
20 votes
댓글 남기기 6
Authors get paid when people like you upvote their post.If you enjoyed what you read here, create your account today and start earning FREE STEEM!
STEEMKR.COM IS SPONSORED BY

Very thoughtful analogy. This was a fun read.