Building a Financial Platform for the Future 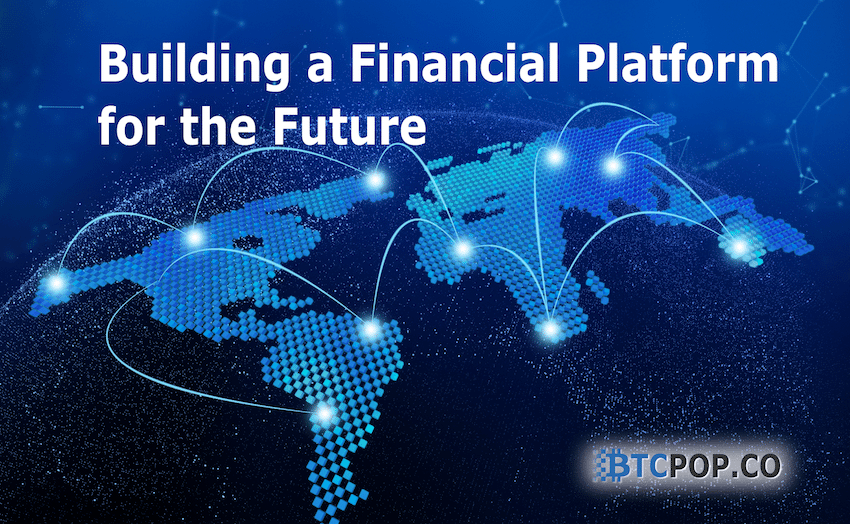 Btcpop.co has a rich history full of ups and downs much like the Bitcoin price. And like Bitcoin, Btcpop perseveres step by step working to build the crypto financial platform of the future.

Btcpop’s history goes back to its start in early 2015. The Bitcoin economy at the time was small, but in a way thriving. The 2013/14 Bitcoin bubble hype had mostly died down and what was left was a dedicated community of users working to build Bitcoin businesses and services. There wasn’t yet serious conflict about the block size, and all seemed to share the optimistic goal of changing the world and creating the financial system of the future.

The natural starting point for the worlds new money was banking. But, banking with Bitcoin is different, and had to be completely rethought. The solution of P2P Banking was the clear path forward for P2P money. The peer to peer (P2P) movement was just getting started with Uber and Airbnb. The concept was finally getting real world traction and the world was taking noice. The idea of P2P banking idea was still very new, but was just starting to get traction in the fiat world with Lending Club and some others starting out. It seemed at the time that this is where Bitcoin could step in and shine.

P2P Bitcoin lending at the time was relatively small and new, but thriving in its own right. Compared to the overall size of cryptocurrency, it was quite sizable. Early 2015 turned out to be the start of the initial P2P Bitcoin lending boom. Silicon Valley venture capital funded Btcjam.com, which started in 2012, was growing at an exponential rate adding thousands of active users a month with a strong growing community. However, if you looked closely cracks were forming on the edges as defaults and collections seemed to be ineffective along with regulatory concerns hanging overhead.

Btcpop’s vision was to allow the free market to solve credit and collection problems, and it would provide the tools necessary to enable this.

It was in this environment that Btcpop was created. It really was the underdog jumping in to solve P2P Bitcoin lending biggest problems. Btcpop introduced a free market approach to lending along with new features such as loan insurance, a savings account, and P2P Shares with many more ideas planned. One idea in particular stood out, and that was introducing altcoin collateral into the P2P lending space. These ideas caught the attention of some of the industries best borrowers and lenders who were frustrated with the current system and looking for solutions. A community began to form. Things continued on with rapid growth and interest in the space, but one year later the boom grinded to a halt as quickly and sharply as is typical with Bitcoin cycles. The catalyst for this was ironically Bitcoin itself. The price became extremely volatile up and down causing even the good borrowers to default and increasing what was already an already rising default rate. The P2P Bitcoin lending boom was officially over and was quickly turning to a bust. Due to skyrocketing defaults and a disintegrating community BtcJam was forced to close. BitcoinLendingClub the other big platform at the time also closed, citing regulatory pressure. The industry quickly became a shadow of its former self, but the industry underdog Btcpop soldiered on. But it didn’t get much further. Some overambitious features added during the boom created an exploitable leak which once discovered quickly bankrupt the company. 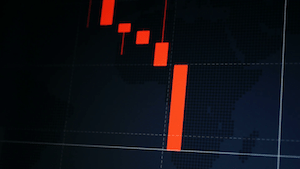 It was here that the Btcpop 2.0 of today was born. Longtime Bitcoin Entrepreneur and Btcpop user Casimir1904 purchased Btcpop in the summer of 2016. The purchase exposed the severity of the leaks as well as the complete lack of account balances. However, setting the tone for Btcpop 2.0, Casimir1904 corrected the significant stolen balances out of his own pocket, stopped the leaks, and started the long rebuilding process.

The purchased remains of an underdog in a busted industry was a tough place to start. But, this didn’t phase the community of Bitcoin OG (Old Guys). With the same resilience they had for Bitcoin, they never lost step building Btcpop up again. One step at a time the platform was repaired, re-constructed, and the once overambitious features were brought into working order. Users began coming back, and Btcpop forged forward to build a working free market platform for the crypto financial system of the future. 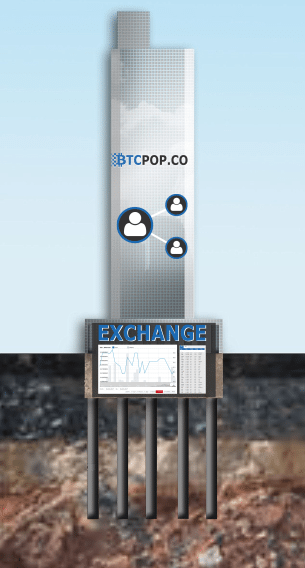 Looking back to the successes and failures of Btcpop and P2P lending, the number one takeaway from early Btcpop was that, collateral is the current solution for cryptocurrency loans. Reputation based lending will grow in the future when online identity and reputation are created and become more standardized. For now collateral is the only viable tool for truly secure cryptocurrency lending. With this knowledge, the Btcpop 2.0 new website launch focused its efforts on building a robust and liquid altcoin exchange platform that will serve as the foundation for Btcpop’s P2P financial platform.

While focusing on building and exchange may seem a bit distracted from Btcpop’s original goals, it is actually well aligned. An API enabled exchange connects Btcpop with a global pool of liquidity from arbitrageurs. With a healthy exchange foundation, Btcpop can build its platform on a sturdy base to grow and become the free market financial platform it set out to be.

The Cryptocurrency Exchange market is highly competitive and naturally centralizing as traders seek the most liquidity possible. But there are many niches and there is always a blue ocean if you look for it. Btcpop found its niche in Proof of Stake Mining or Staking.

Btcpop found that it was able to utilize its wallet expertise and internal payment systems to distribute staking rewards to its users efficiently. And it was is able to do this with a continued high level security and liquidity.

The value of automatic pooled staking quickly became apparent, and even coin security enthusiasts were able to see the value of automated pool staking. Besides the benefit of pooled staking, it is just benefit enough having someone else deal with the 24/7 wallet demands needed for staking. Most users do not have extra computers to set up for staking wallets, and not everyone is ambitious enough to purchase setup a Raspberry Pi wallets for their POS holdings. Btcpop always encourages the individual secure wallet storage of cryptocurrency, but realizes the need for many new users and holders of multiple coins and provides a safe, secure service for only 2% of staking rewards.

Btcpop has since helped thousands of users put their POS coins to work. As of 4/9/18 Btcpop is currently staking over 100 POS Altcoins. At the peak of altcoin prices, Btcpop paid out well over $1M worth of total staking rewards. Many users even found that pooled staking was more profitable for them as the compounding effect more than outweighed the 2% fee.

Statistics are available at https://btcpop.co/Staking for logged in readers or https://sites.google.com/view/btcpopstaking for those who don’t have a Btcpop.co account yet. 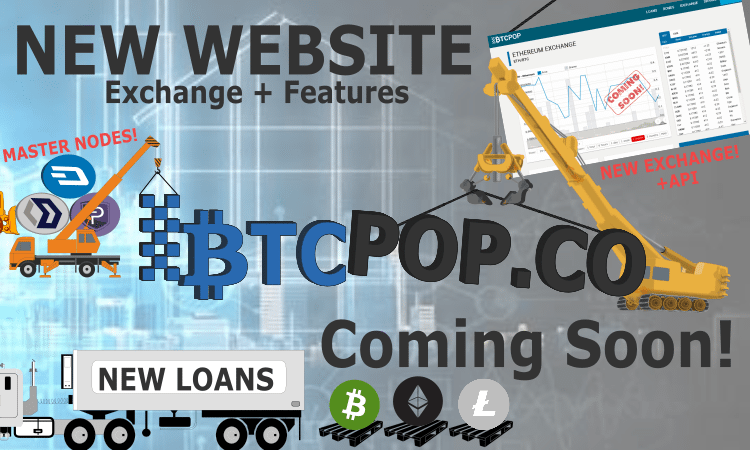 The launch of Btcpop’s new exchange will also be the launch of a whole new Btcpop website with a new and improved user interface. Many new ideas and services are planned after launch. Btcpop plans to expand its services to different altcoins such as ETH, BCH, LTC, and more as the market demands them. Shared Masternodes are in as well to compliment current staking. The list doesn’t stop there and Btcpop will work to continuously roll out secure useful features to its users.

However, in all the excitement it's important to remember that building the financial platform of tomorrow is a marathon and not a sprint. Learning from lessons of early btcpop development, the new website and features will only be launched after they have been thoroughly tested and deemed secure. Btcpop like Bitcoin will persevere through the ups and downs and continue to move ever closer to that P2P financial future we all imagine.

bitcoin
3년 전 by dalesatoshi14
$0.19
2 votes
댓글 남기기 1
Authors get paid when people like you upvote their post.If you enjoyed what you read here, create your account today and start earning FREE STEEM!
STEEMKR.COM IS SPONSORED BY

With exchange volume BTCPOP will be the one stop shop for all things crypto.

With the new site launch, I hope BTCPOP will list Steem and SBD on the exchange.