Bitcoin rebound? Is it going to happen? If so, when? And by how much?

Thanks to everyone for welcoming me to the STEEM community. I really appreciate all of the sincerity as well as the needs for Upvotes and follows!!! Rest assured that I too am not alone in desiring a good following, but needless to say, I want to be a thoughtful contributor and add value and a voice (as well as a reason) to the countless rumblings.

So this brings me to this recent chart that a Bitcoin friend of mine sent via FB. I thought it was a worthy enough chart for comment, observation as well as digestion. 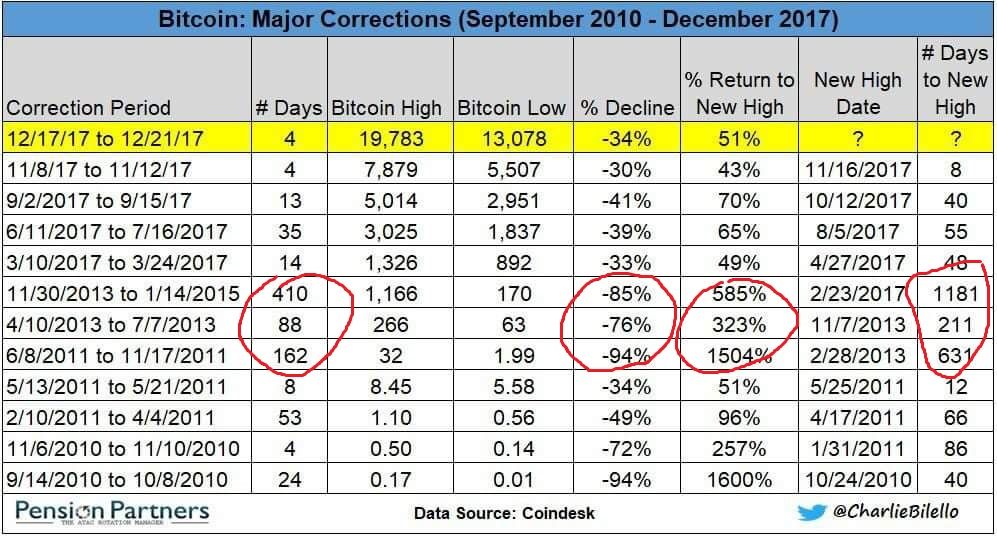 As I’m writing this post, Bitcoin has fallen from its lofty spot of 19,700, all the way down to 12,570 yesterday before its leveling off at 14,500. The chart shows the various “pullbacks” or “corrections that have transpired over the last 7 years. I think what is most startling from the chart are the figures that I circle in red: namely the time ~ how SHORT the corrections were and how LONG for the rebound to come back before hitting the highs; the magnitude ~ how severely were the drops and how large of a rebound was going to happen?

Focusing on time for a second, I think its important to highlight that corrections can be very short term. Part of the reason, from a finance perspective could be driven by multiple factors (macro ~ economy, regulation, markets or it can be micro- the buyers and sellers of stock/bond/commodity/ICO). The point is that corrections are usually never expected and can vary in the length of the time it corrects. The subsequent rebounds are usually longer than the correction. In this case the rebounds, after a correction are much longer, this is especially true when the MAGNITUDE of the correction was a very large one (e.g. -85%, -76%, -94%).

Turning to the magnitude for a second, I think its important to recognize that in material corrections, the subsequent rebound can be materially higher. Why? I think there are several factors, and I’m sure that the list is way longer. But there is something about what people view as being “intrinsic value” e.g. what is this product really worth? Is it a zero? Or is it between its initial fallen price and non-zero. Investors have a floor in their mind of what they attribute value to. And I think once the item has fallen into the consensus area of “stupid cheap,” or -94% from its price, then the buyers come back to the caucus and start gathering the discarded pieces. And I think the reason why it rebounds back so high is because there is a what we call positive momentum effect. In the world of investments there are 4 observable risk factors (size, value, market, and momentum). The last factor is what is driving Bitcoin and the broader Cryptocurrencies. Momentum is what has been driving markets for the last 8 years (in addition to low interest rates and technology). Positive Momentum brings buyers to the space, because positive returns beget positive returns. Negative Momentum is the opposite, sellers brings other sellers and you see a decline in price. This phenomena is not new nor easily dismissible, but very much observable. Its what quant hedge funds use (mean reversions, short term vs. long term momentum etc.)

So my conclusion about this chart is that if you are waiting for a material correction (for Bitcoin to drop even further), you might not see it, why? Because, you’ll never know if you’re already in the beginning of a rebound period. So what do you do? DOLLAR COST average, buy a little here and there and sell/take profits here and there. Play the long game.

“as a investor there is no difference between being EARLY and being WRONG; you just need to survive long enough to be proven right before you get fired…whichever comes first” --- Anonymous.

bitcoin cryptocurrency finance crytpo
3년 전 by epan3561
$8.43
16 votes
댓글 남기기 6
Authors get paid when people like you upvote their post.If you enjoyed what you read here, create your account today and start earning FREE STEEM!
STEEMKR.COM IS SPONSORED BY

Thanks for sharing this🤓

I do agree with you, and re-post.

Yeah, there's no way of knowing, because I have no idea how one would come to know haha But yeah, I agree, and I think seeing it go back up to 14K+, even if it dipped to 9K, is quite nice. Especailly considering before it hit 19K it was at 9K. So 14K isn't so bad. It goes up, goes back down, then back up a bit and stays there a little while. Then oh, up it goes, nope, it goes down, oh, back up halfway, levels a bit. So in reality, it is constrantly going up if you're patient enough.

Good work. I am following you. Please follow me back and upvote my work if you like any.

excellent my brother! good contribution to this wonderful community that is STEEMIT about the crypto currencies, I hope to read more about you, greetings from venezuela

hello friend and thank you very much for the information, Bitcoin is important because it is a new technology that allows you to avoid going through an intermediary to validate a transaction. It generates value when performing validations, and this value is transformed into an exchange element. regards