Is the price of bitcoin falling on falling volume?

If you follow Technical Analysis (TA) on Bitcoin (BTC) and other cryptocurrencies you might have noticed that some are claiming that the price of bitcoin is falling on falling volume. The theory going that as less people trade, there's less demand, and the price falls.

You might also have noticed this yourself if looking at your own exchange, if you're using Bittrex for example. On Bittrex the volume 30 day moving average of BTCUSDT (USD Tether per BTC) has been falling since December 27 2017 and is now on the same level as August 4 2017 when the price of BTC was 2846 USDT! 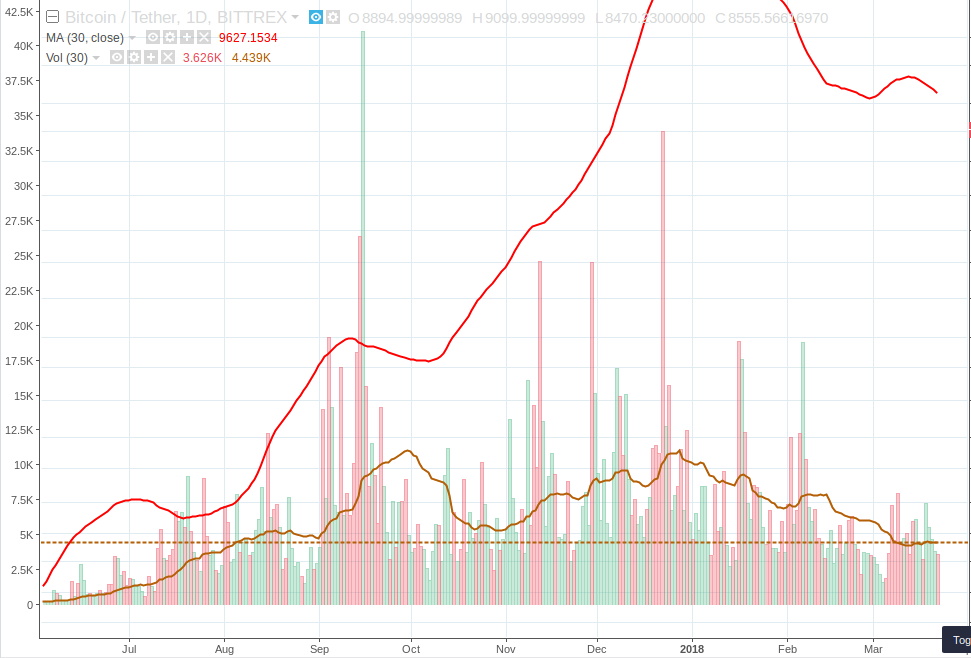 There's a number of problems with just looking at one pair on your own exchange, or one of the biggest ones for that matter though:

Thus, if we look at combined volume for (almost) all exchanges at for instance livecoinwatch.com we see another picture. Daily volume hasn't been below 4 billion since november 26 2017, and is likely to stay above 6 billion within the next few months. Volume has certainly fallen since ATH, but you don't need to go further back than end november and it has gone "steadily" up since then.

However, thers's a problem with this analysis also. Trading volume on livecoinwatch and coinmarketcap rely on information from the exchanges, and as recently documented by Sylvain Ribes, such information cannot always be trusted. He estimated that 4 billion USD daily cryptocurrency volume is fabricated, and neither livecoinwatch nor coinmarketcap seems to have addressed the problem.

Where does that leave us? Without correction from the data aggregators it is hard to say know at what time how much fabricated data was introduced, and thus what the real trend is.

bitcoinity.org is a bitcoin trading data aggregator which does not include the 4 billion obviously fabricated volume (simply because they haven't included many exchanges at all). Here we still see a similar picture to the one above, albeit with BTC as base currency, or even with trades per minute; that the minimum/base combined volume is climbing steadily from 50k to 100k per day.

I recommend taking a look at the different statistics on data.bitcoinity.org, for example the exchanges list gives quite another rank than if you only look at volume, by comparing the order books (explanation here).

Conclusion? I does not look like the price of BTC from all time high (ATH) has really been falling on falling volume in a 3–6 months perspective, if so we should have seen a consistent decrease of volume since ATH similar to the increase before. However, the volume might not be very much higher either, but quite probably "different". In the longterm, volume seems to be looking good for BTC.

bitcoin ta trading cryptocurrecy
3년 전 by guttormf47
$0.98
7 votes
댓글 남기기 1
Authors get paid when people like you upvote their post.If you enjoyed what you read here, create your account today and start earning FREE STEEM!
STEEMKR.COM IS SPONSORED BY