Bitcoin (BTC) day time price action has been putting in continuous all time new highs. I think we can probably see $10,254 or at least $10,000. To that end, the below shows the probable price pathway. Then a correction to around $8300 to maybe $7,900 or so. But still, higher highs can occur before the wave iv correction, especially if wave iii wants to extend further. 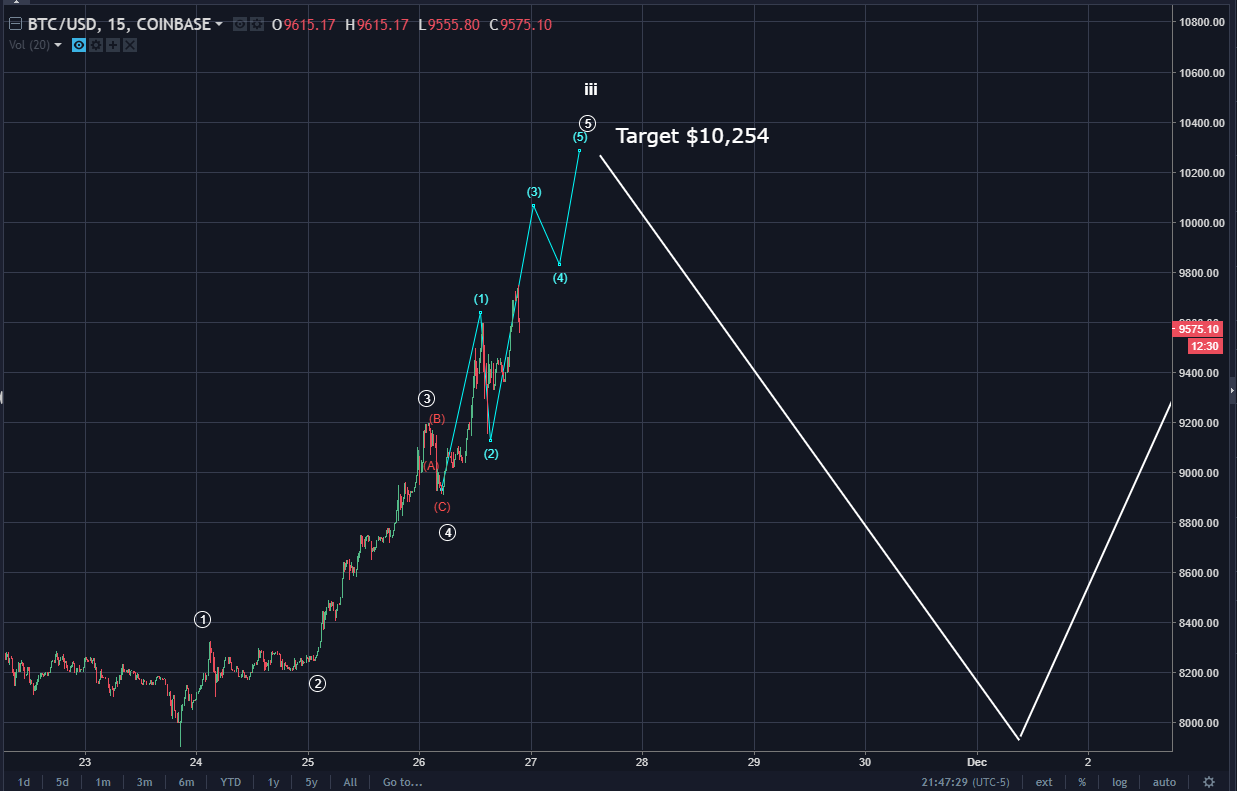 If the wave iv occurs to around $8,300 or so levels, then it would touch the upper blue line of the trend channel as shown by the purple wave 4. Following this, price would then jump towards $13,000 or higher. 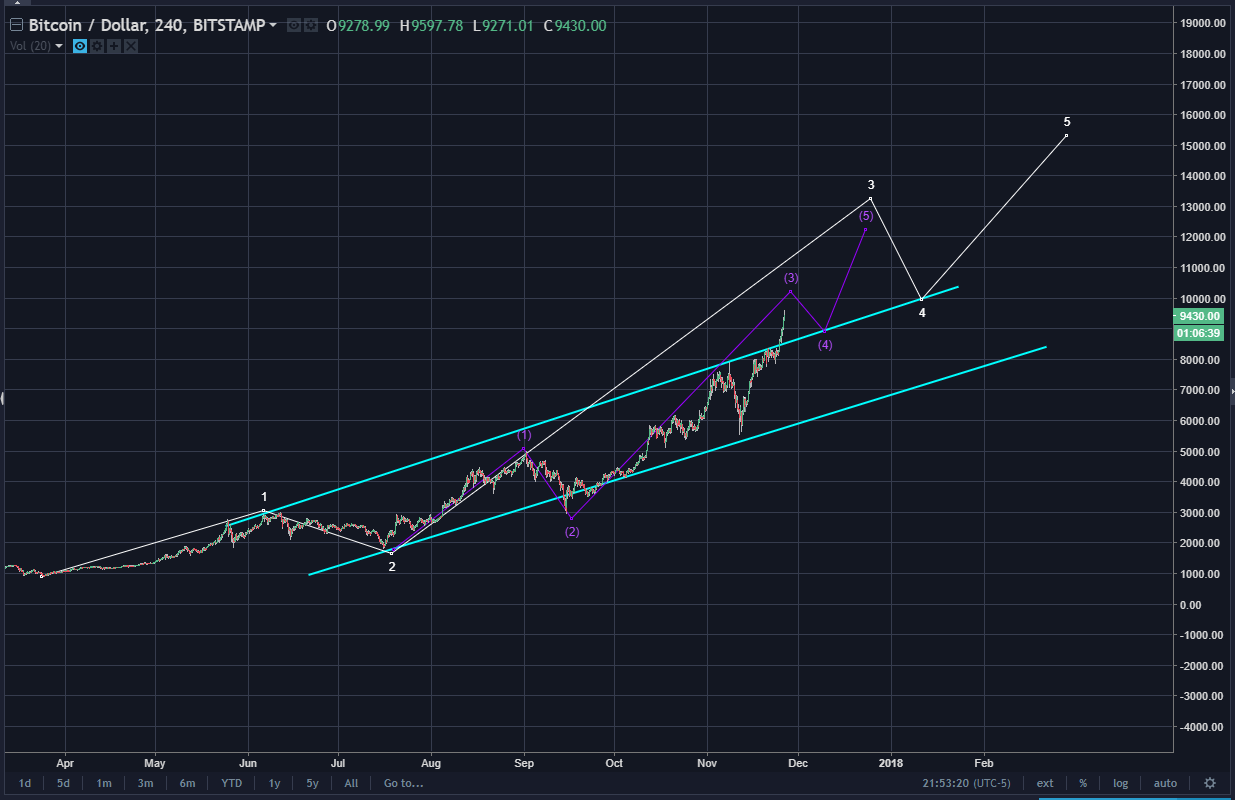 Bitcoin Cash (BCH) broke out of its downward pointing symmetrical triangle as shown. Now, price should start impulsing towards 0.3168 BTC Legal Mumbo Jumbo: This is only my opinion, make of it what you wish. What does this mean? It means it's not advice nor recommendation to either buy or sell anything! It's only meant for use as informative or entertainment purposes.**
bitcoin money cryptocurrency blockchain altcoin
3년 전 by haejin86
$22.20
221 votes
댓글 남기기 30
Authors get paid when people like you upvote their post.If you enjoyed what you read here, create your account today and start earning FREE STEEM!
STEEMKR.COM IS SPONSORED BY

I'm really amazed by how well BCH is doing in the face of this monster bitcoin rally. I would not be surprised to see BCH stabilize above 2k by mid-December.

I agree. BCH is looking great! 😎

Are you still considering a longer term outlook that involves a correction down to $100-200 levels? That’s like 1% of current value. It seems impossible at this stage. I’m not sure if that has been invalidated by recent action?

Do you have a time machine we can borrow?

It is getting insane now. Watching BTC, an $8.5k asset, move 15% in 3 days is madness. A new fork every day creating money out of nothing. And BTC still isn't being used (substantially) for anything but speculation; there is no substance! Yet you can see the fomo and greed building.... these are worrying signs indeed.

I'm looking forward to the major correction. I will short, make money, and buy back in when the bull mania has ended.

Exactly. A 98% drop is not a correction. I don’t see how any asset can recover from a crash such as that. 20-30% seems reasonable, even 50%. Bitcoin has had similar before.

It's not money out of nothing. It's just like any other altcoin. It has value because people give value to it (and put money on it).

I'm on the same wavelength as you, come on correction!

I think it will go higher than any of us can imagine. Remember when we thought $1,000 was crazy?

Your analysis' are usually interesting to read.
Any opinion on Lisk coin from your side?
It is bouncing up and down in a very small channel for the last few days

I don't do charts, but according to their reddit, they f-ed up their november announcement by delaying EVERYTHING. That's why the price dropped.

All updates to LISK should be revealed at february 20th. -> that's when price should reach ATH.

And if the announcement is successful this time - it should continue to rise.

I could be dead wrong, but I don't lisk is worth touching until at least January (unless you're ok with LONGER TERM holding, while everything else rises.).

p.s. I hold some lisk. Should've sold, but it's still profitable for me to hold, so I hold.

Thank you for sharing your opinion with us.

I was reading something similar to what you wrote, people saying it might be more a long term thing. Let us see if they can follow their own plans.

Maybe other coins are just crazy these days, like BTC or ADA, so I was wondering what is going on here.

Good luck for your investment, I hope it will pay back well in the future!!

thanks for the update!

upvoted-thank You for posting this!

Very cool. I'll check out your other tutorials too!

Thank you as always.

Congratulations @haejin! You have completed some achievement on Steemit and have been rewarded with new badge(s) :

Hi @haejin, can you please do a chart analysis on Lunyr (LUN)? Cheers!

For anyone thinking BCH is not looking good right now: Wrong! Here is what I think is happening: 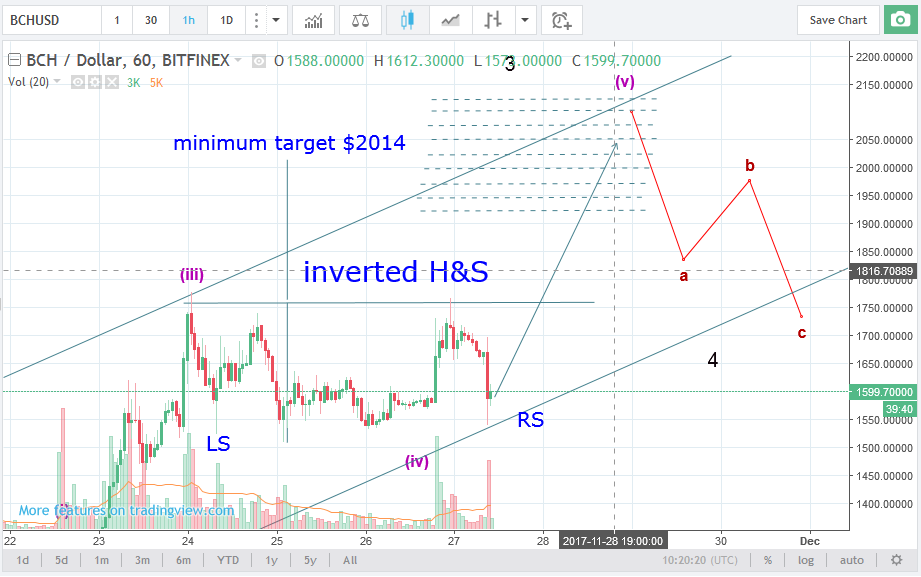 Do you still think that?