ICONOMI (ICN): One More Lower Low to a Probable Bottom

ICONOMI (ICN) is expected to bottom on this correction. It's amusing how ICN is the same airport code for Incheon Airport in Seoul. ICN had broken out of the symmetrical triangle that also counted well as an abc correction. The breakout was impulsive as shown by the blue waves. Elliott Waves states that after five waves, there is a a requisite retracement, often in the form of abc waves. A closer examination shows that the corrective waves are actually an expanded flat. Expanded Flat corrections has the B wave reaching far higher than the start of A wave and the C wave declines below the A wave. Subwave counting is crucial to be able to determine and project with good probability. The tail end of wave C could be as the yellow subwaves show. 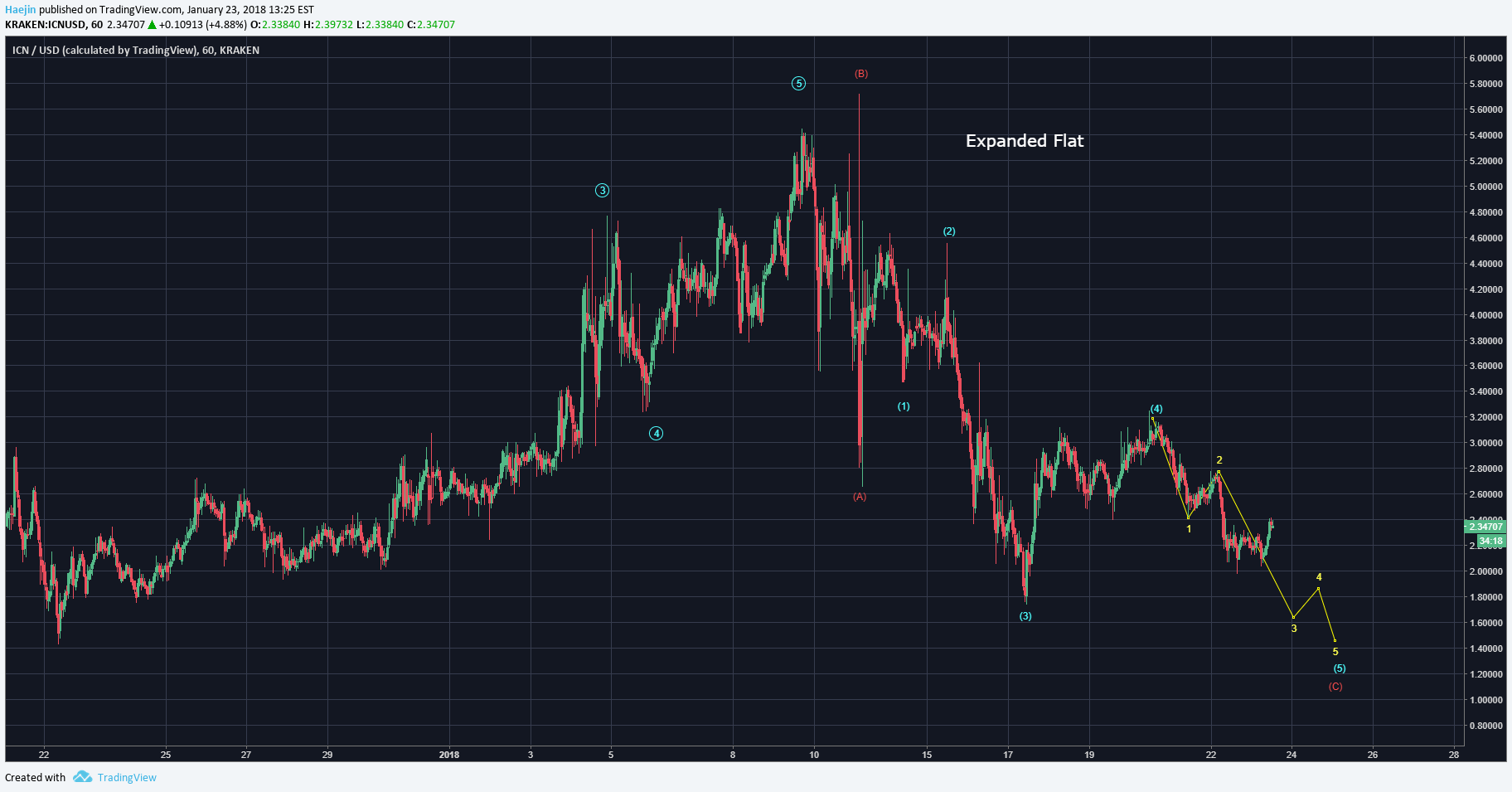 bitcoin iconomi cryptocurrency blockchain altcoins
3년 전 by haejin86
$390.32
308 votes
댓글 남기기 32
Authors get paid when people like you upvote their post.If you enjoyed what you read here, create your account today and start earning FREE STEEM!
STEEMKR.COM IS SPONSORED BY

Keep up all the great work and always ignore the disrespectful people Haejin. Your work is incredible valuable to the community. Please also see what I contribute to the community to help you make immense gains. Over 50K subs/followers total now and growing fast.
https://steemit.com/bitcoin/@philakonecrypto/lesson-12-let-s-learn-advanced-55-ema-strategy

Any chance for an analysis for Numeraire? The MACD is really weird for this coin

nice. love your videos haejin!! you the man

If Btc duplicates last years perf then it will go to 200k by year end. It will hit $7800 before mooning again.

Hi Haejin, love you videos and analysis. Would you be so kind to be able to do another review analysis of 8BIT coin. Your analysis indicate significant growth over the next month. Since market correction is this still the analysis? Kind Regards

TNT Right on ! Could you also look at NAV. Thank you Haejin !

$SKC Skeincoin chart's formed a cup with handle. It's one of the most undervalued coins which has an active team and great community. Low supply, low marketcap.I think we should see x10-20 in the next few months. They've recently announced a new website. @futuranaft

thanks. have a nice day

Hi Haegin, could you do Neo

Guys open your eyes. I am not promoting anyone. But @salahuddin2004 deserve respect for his TA. Look at haejin new drama Hi Haejin, love your videos. Could you please do a review of 8BIT again. Thank you kindly

I love your posts, thank you so much for sharing Haejin!

great article thanks for sharing

can you please take a look at YOYOW

Hello Haejin can you please do RDD analysis. It's been 3 months and would like to know if it is still correcting. Thank you

Love to see both experts view on same cryptos. Haejin can you provide predict target like @salahuddin2004 did in his prediction.

Love to see both experts view on same cryptos. Haejin can you provide predict target like @salahuddin2004 did in his prediction.