SUMMARY
SALT/BTC could have one more lower low perception IF ONLY Elliott Waves were being applied. The below chart shows that a clear a,b,c is likely and so one more lower low could be expected. In having done this since 1997; I've learned that combining chart patterns and Elliott Waves is the most ideal way to enhance probability of identifying the likely price direction. The below chart shows a handle formation given that prior to it, the rounded Cup was completed. These combined with Elliott Waves allow greater confidence on the direction of price. The handle clearly does not need to be a simple a,b,c correction but rather can morph into a triangle pattern counted as a,b,c,d,e. In doing so, the subwaves of this triangle seems complete. IF correct, then there is higher likelihood of price rising higher into an impulse as shown by the blue waves. Those five waves would represent an initial first set of impulse to signal a trend reversal. The decrease in volume is also confirmatory. 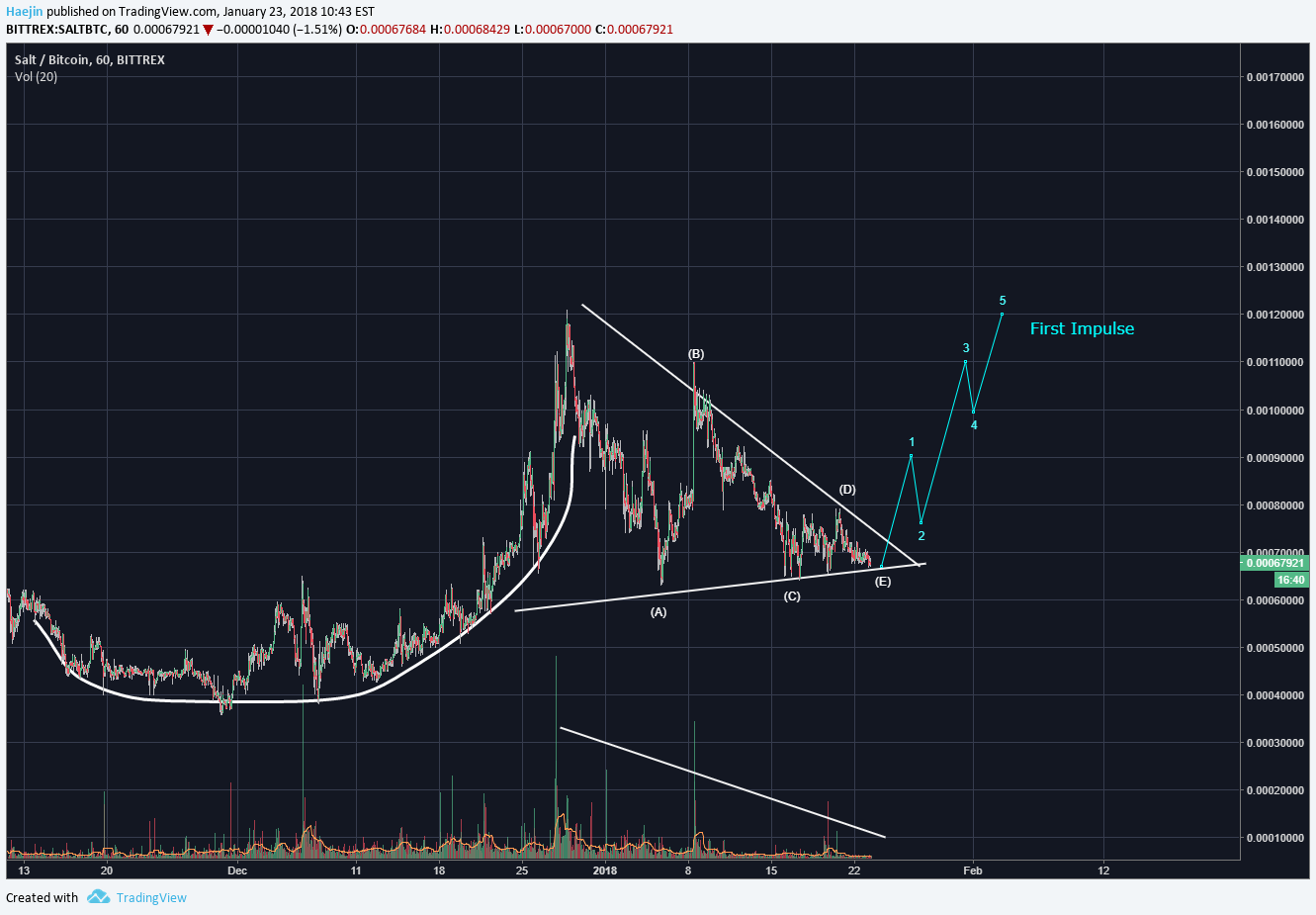 bitcoin salt cryptocurrency blockchain altcoins
3년 전 by haejin86
$422.01
331 votes
댓글 남기기 38
Authors get paid when people like you upvote their post.If you enjoyed what you read here, create your account today and start earning FREE STEEM!
STEEMKR.COM IS SPONSORED BY

Would be cool to hear you talk about POE, it has huge potential! 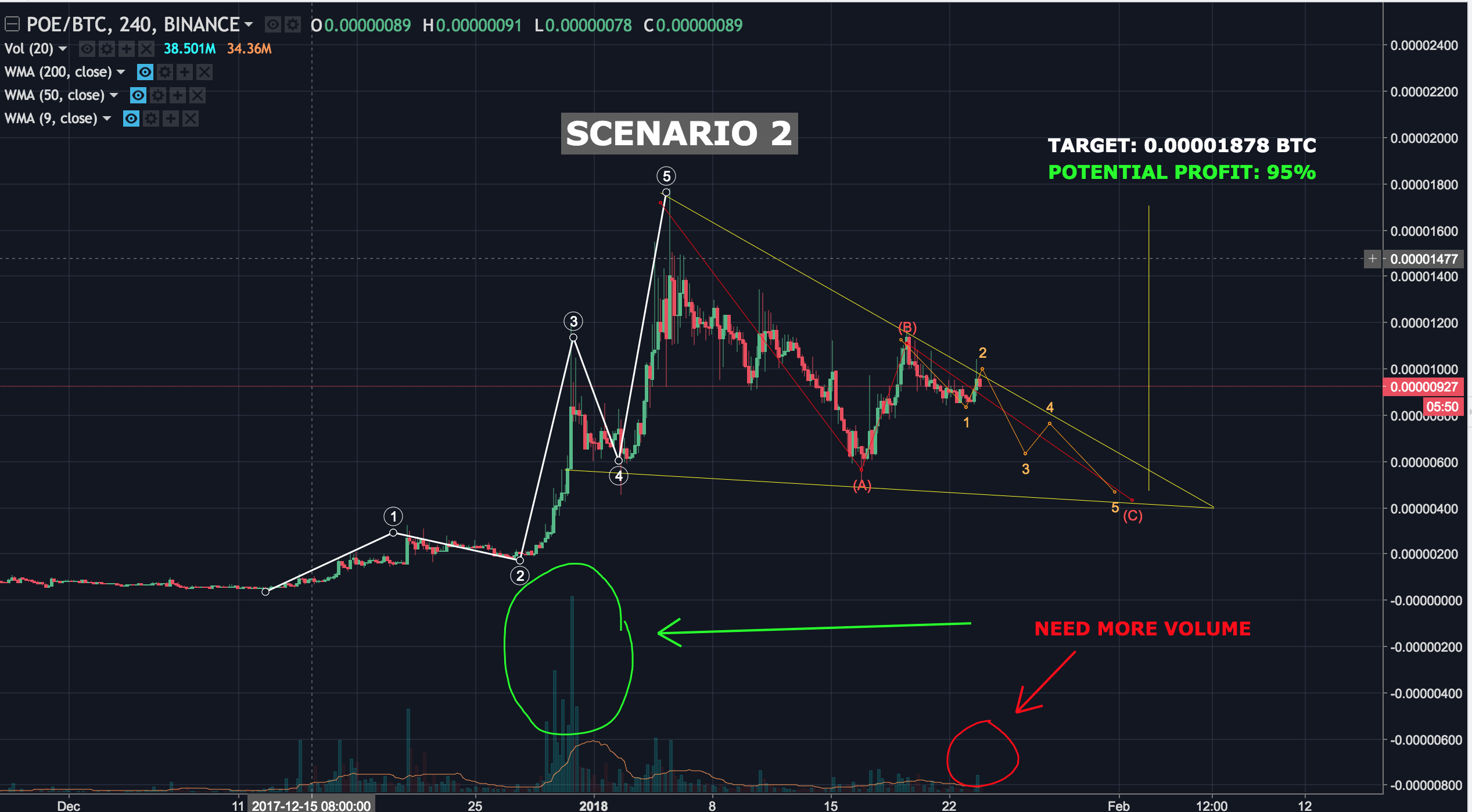 Thanks for the update! I'm a total noob compared to you haejin. But i'm running a portfolio experiment that could be interesting to you. The experiment is based around the question: What will happen if I invest a 1000$ in each top 100 coins based on market cap.
I've build 7 portfolios a top 100,50,25,10, 5 and 2 others to compare with each other.
anyway the full explanation and updates are here: https://steemit.com/cryptocurrency/@armtrack/the-experiment-explained

sounds awesome good luck ... I look forward to your updates thanks! Upvoted resteemed! 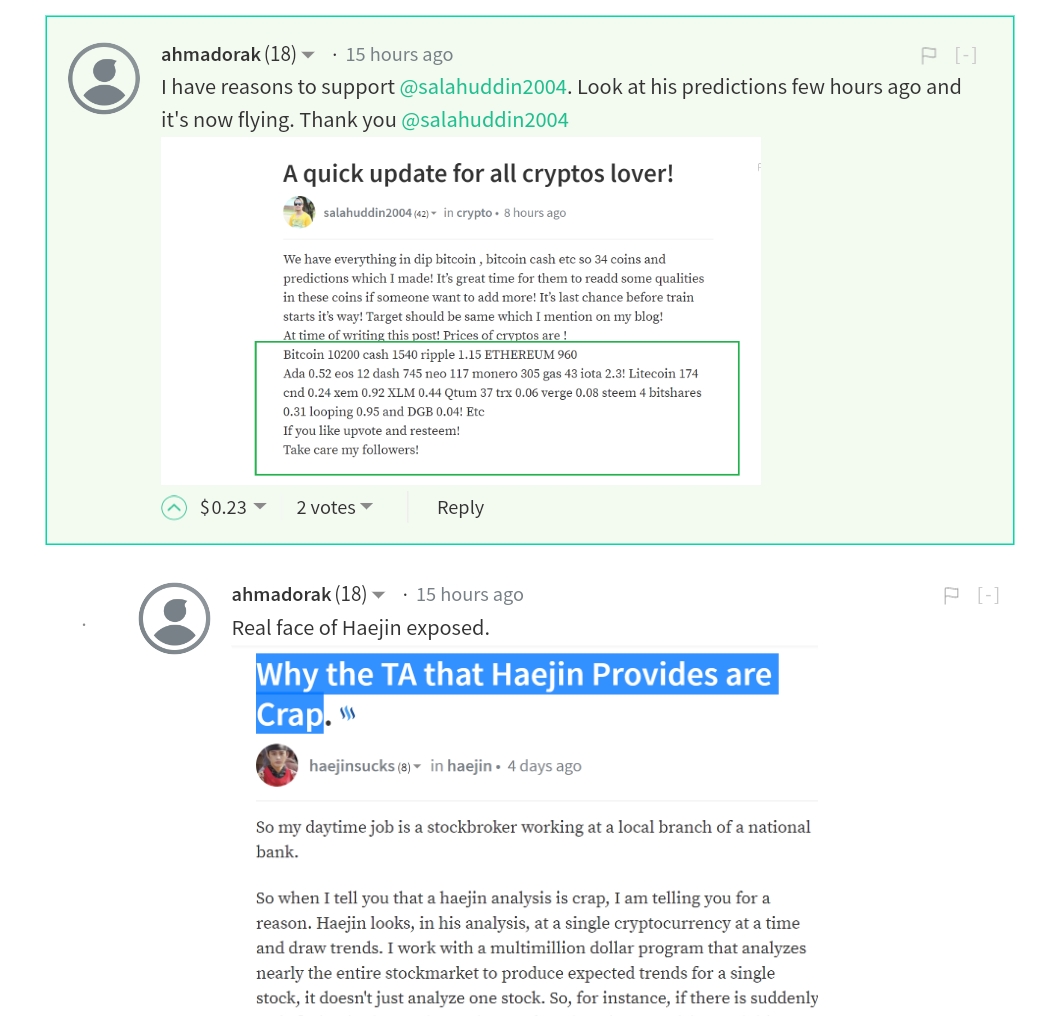 Lol so many self proclaimed "experts" here.

A lot of people have been saying haejin is a scam recently. I'd just like to point out that his analysis is purely based on price trend so for example with Bitconnect, the charts looked like they had potential, completely disregarding the BCC business model.

Just keep in mind nice charts != moon, and always consider the news along with the charts.

Yes, but in one of his posts, I read that the charts come first and then the news... Will be nice to find that post. The charts did not say a thing about the soon to happen BCC crash. BTW, I haven't owned any ;-)

@haejin check out my analysis and leave a comment I would like to hear your opinion
https://steemit.com/money/@drumsta/ta-salt-btc-price-about-to-burst-to-new-highs-342-profit-potential

Salt. I say just watch out. Been pumped alot and i dont trust the team or product. Has more potetial to be zeroed than most.

I agree with so much , But if you don't mind can i share with you #FollowForFollow for suporting in steemit ?

#1
Salt I don't want to go too much into detail as their whitepaper does that for you,
https://www.saltlending.com/
Basically they're a lending service instead of credit score they use your Crypto as collateral for loans, credit score doesn't matter.
Some noteable people on their team - Erik Voorhees, Shawn Owen, etc.

Currently writing this salt is $2.52

On their site you can deposit salt and use to pay off a portion of your interest,
the thing is the site values it at $25 though.

So one the platform is launched, which they already have millions on millions of dollars wanting to be lent out (Source : Twitter)
The market pressure to increase closer to $25 will be enormous.
Also, They announced Crypto Credit cards coming soon early 2018
Sounds pretty ambitious but with a team like theres and the progress they've been making, It will definitly happen.

Platform is launching this year

I predict salt to be at least 10$ by the end of the year.
I believe salt will explode similar to binance, (BNB did 0.1 cents to 2.80)
Which will only put the market cap 450M, current market cap ~115-120M
Surprised this one flew under the radar this long.

You dont even have the current price right.

I was doing my own analysis on SALT/BTC and it seemed to match your first chart for the C wave down to new low and then a trend reversal. I don't use Elliot wave, I use old supply and demand price levels on the hourly chart. They seemed to match up, and in my experience when two anlaysis come to same conclusion using different methods, usually turns out to be a good trade opportunity.

Here is my chart: and if you want to see a more in depth chart, here is the link to the post.

Keep up the good work @haejin :)

With all due respect @haejin I believe that the decline of the market on this occasion can not be predicted by Elliott Wave since I think that the fall of the market is mainly due to the political harassment that the market is receiving by the great powers. My humble opinion is that the future of the market is uncertain until we know what standards the major powers will pondered the cryptocurrency market.

If you want to continue reading about it, I invite you to visit my blog.

I had herad about the Elliot wave theory and you have just confirmed it , its going to be a good time to buy now we know our ABC's ! 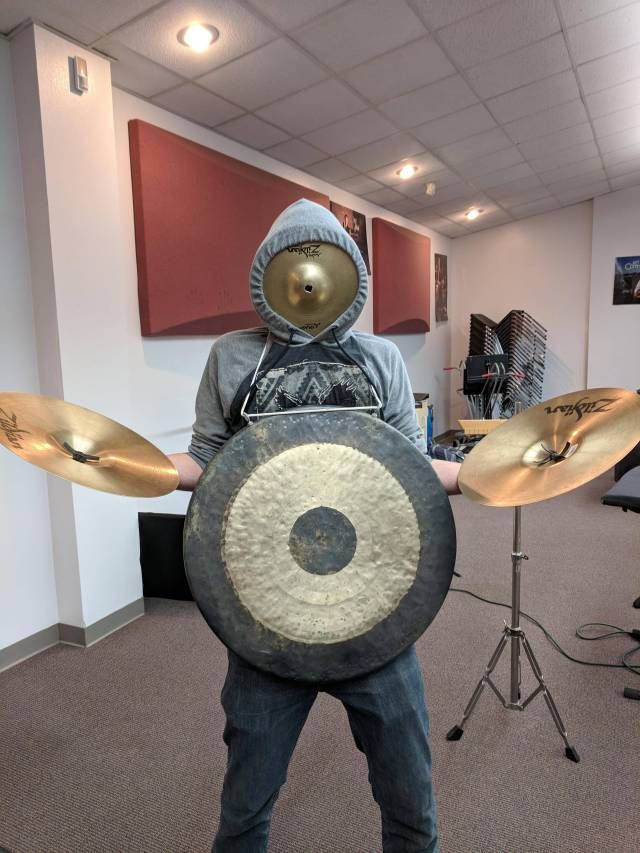 That's a cymbal mage, I've seen them in Final Fantasy

many thanks for info @haejin

It seemed as if salt was supposed to go up, so I think it may do the opposite of what happens with BTC USD

There is a great idea from your writing about SALT/BTC sittings. Thanks lot you for sharing among us.Your writeing I always easily better understand.

I set the trade up using the following ladders: I do believe that your analysis of another low is the most valuable one.
The EMA trend seems to put it in a down direction in a medium/long term which combined with your C wave makes it strong and most expected direction.

Check out @cryptobroye for more analysis of your favourite crypto's and a look into how to perform your own tech analysis and learn complete trading strategies from a veteran of chart analysis!

Wow! It is great here on Steemit. Please help a beginning with an up vote for my first post on Steemit. Thanks in anticipation.

Wow! It is great here on Steemit. Please help a beginning with an up vote for my first post on Steemit. Thanks in anticipation.

thank you!
by any chance can you do a chart on BRD coin?