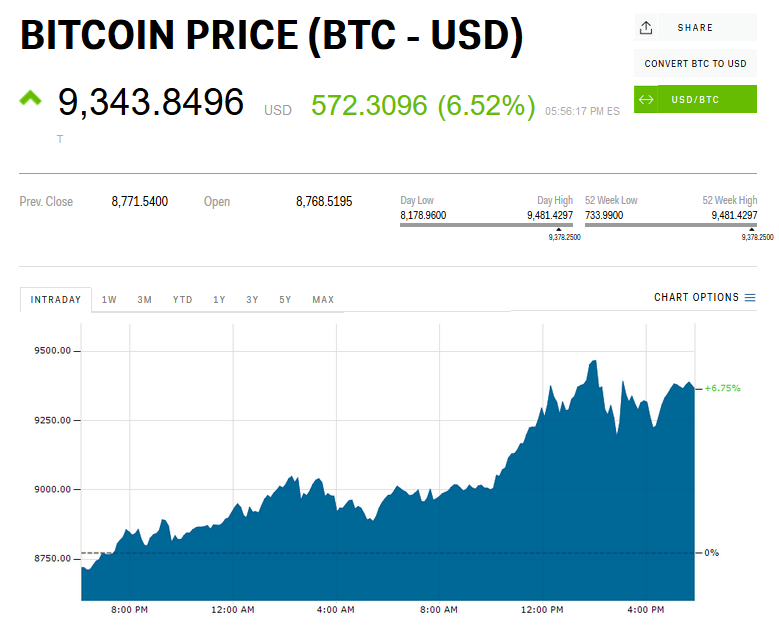 The price of bitcoin, the scorching-hot cryptocurrency, soared above $US9,000 a coin for the first time early Sunday morning.

Bitcoin was trading at an all-time high of $US9,481 a coin Sunday afternoon, according to data from Markets Insider.
Billionaire businessman Mark Cuban told Business Insider the price of bitcoin will continue to rise as long as it continues to act more as a collectible than a currency.
Bitcoin‘s impressive march into record territory continued Sunday afternoon. The digital currency, which has been on a tear since the US Thanksgiving holiday, soared past $US9,000 a coin early Sunday morning.

By Sunday afternoon in New York the digital currency was trading at an all-time high of $US9,481 a coin, a more than $US1,000 increase from its price mid-day on Thursday. It gave up some of those gains and by 5:56 p.m. ET bitcoin was trading at $US9,343 a coin.

Bitcoin’s rapid appreciation appears to have coincided with a spike in the userbase of the largest platform for buying and selling cryptocurrencies in the US.

Coinbase, the San Francisco firm, grew its user count by 100,000 to 13.1 million from Wednesday to Friday, according to analysis by Alistair Milne, cofounder of Altana Digital Currency Fund. The analysis was first reported by CNBC on Saturday. At the time of print, Coinbase reported more than 13.3 million users.

As for how high the cryptocurrency will go, one of Wall Street’s biggest bitcoin bulls recently doubled his price target for the coin to $US11,500. Tom Lee, the managing partner and head of research at Fundstrat Global Advisors, expects bitcoin to hit $US11,500 by mid-2018, up from the estimate of $US6,000 he made in August.

Lee is optimistic about the coming launch of bitcoin futures by Chicago Mercantile Exchange, which many think will increase the cryptocurrency’s legitimacy, thereby expanding its potential user base. Folks also believe futures will help dampen bitcoin’s spine-tingling volatility.

Billionaire businessman Mark Cuban, who recently described investing in bitcoin as a Hail Mary, told Business Insider the price will continue to rise so long as bitcoin continues to function more as a collectible than an actual currency.

“The number of people opening up new accounts and buying bitcoin, even fractionally, is skyrocketing,” he said. “Yet the people who have it as a true store of value have no reason to sell it as long as demand continues.”

Since the list of merchants that accept bitcoin is still relatively small, holders don’t have many places where they can spend their coins, either.

“They can’t spend it, so they keep it,” Cuban said.

As such, Cuban expects the price to continue to rise until “there is some systemic reason for the collectors to sell.”

The markets might be waiting a while for investors to sell.

A survey by LendEDU found the average bitcoin investor doesn’t plan to give up their bitcoin until the cryptocurrency reaches $US196,165, or 21 times its current value.

bitcoin cryptocurrency
3년 전 by nemesisdumentis14
$0.00
2 votes
댓글 남기기 1
Authors get paid when people like you upvote their post.If you enjoyed what you read here, create your account today and start earning FREE STEEM!
STEEMKR.COM IS SPONSORED BY