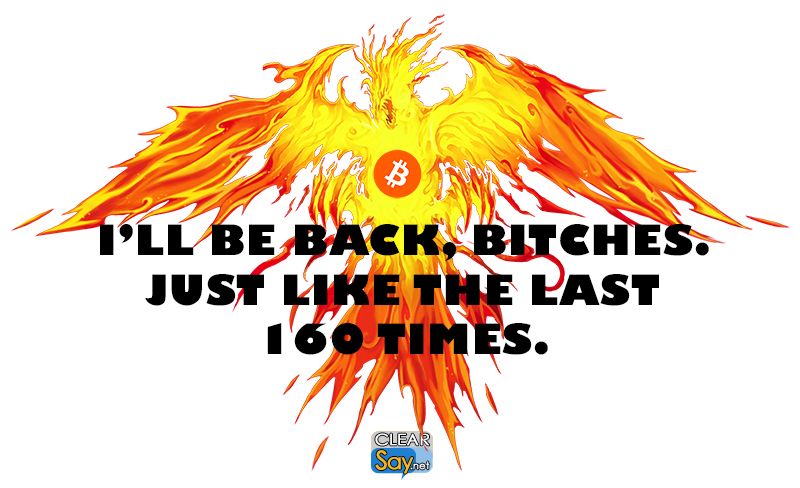 Yep, our "poor" phoenix has been killed yet again. This time by the combined forces of Jamie Dimon - JP Morgan's CEO - and to a greater extent, China's regulation of ICOs and threats of more regulation to come.

And yet, like the mythical phoenix, each time crypto rises from the ashes, and each time flies higher than before. What's up with that? Could it be something to do with values such as efficiency, security, and integrity? Could decentralization be a good thing? Could a currency with no need for trust be a good thing? Could - somehow - more and more people be hearing about it and wanting in on the action?

Why would big players like China and JP Morgan do such a thing? It wouldn't be a leap to guess that big banks and China are afraid of a revolution in currency and want to crush it. The last thing big banks want is for the populace to stop using fiat currency! Same for China.

Another potential reason: What if the Empires and Elites understand the inevitability of cryptocurrencies and want to bring the price down where it will be easy for them to buy a huge amount while simultaneously putting a dent in the collective wealth of the rebel alliance?

A small sample of the 160 bitcoin death predictions from https://99bitcoins.com/bitcoinobituaries:

Disclaimer: No guarantees. Be careful. Only "bet" what you can afford to lose. I'm not responsible for your losses.

bitcoin cryptocurrency investing money news
2년 전 by scottermonkey61
$5.14
12 votes
댓글 남기기 5
Authors get paid when people like you upvote their post.If you enjoyed what you read here, create your account today and start earning FREE STEEM!
STEEMKR.COM IS SPONSORED BY

Well, to be fair, some of those articles are pointing out that crypto currency is definitely going to rise but "bitcoin" in the "long term" might not be the leader. I especially liked Yanis Varoufakis' argument that Bitcoin only rewards hoarders (don't forget that he's an economy professor and #1 enemy of the banks in EU):

To prevent that would need regulation; which is directly against the idea of decentralisation.

This is why Bitcoin is "eventually" doomed to fail; but we don't know when. For all that we know, perhaps 1BTC might reach 1 million dollars before that happens.

Brilliant! I saw this on Google Plus.