Bitcoin’s roadmap to mainstream adoption in 2018

1.) Innovators - These are people who want to be the first to try the innovation. They are venturesome and interested in new ideas. These people are very willing to take risks, and are often the first to develop new ideas. Very little, if anything, needs to be done to appeal to this population.

2.) Early Adopters - These are people who represent opinion leaders. They enjoy leadership roles, and embrace change opportunities. They are already aware of the need to change and so are very comfortable adopting new ideas. Strategies to appeal to this population include how-to manuals and information sheets on implementation. They do not need information to convince them to change.

3.) Early Majority - These people are rarely leaders, but they do adopt new ideas before the average person. That said, they typically need to see evidence that the innovation works before they are willing to adopt it. Strategies to appeal to this population include success stories and evidence of the innovation's effectiveness.

4.) Late Majority - These people are skeptical of change, and will only adopt an innovation after it has been tried by the majority. Strategies to appeal to this population include information on how many other people have tried the innovation and have adopted it successfully.

5.) Laggards - These people are bound by tradition and very conservative. They are very skeptical of change and are the hardest group to bring on board. Strategies to appeal to this population include statistics, fear appeals, and pressure from people in the other adopter groups.

In addition, there are 5 primary factors that influence adoption of an innovation, as follows:

BITCOIN ON THE INNOVATION ADOPTION CURVE

Most people would likely agree that Bitcoin lies within the “Early Adopters” stage of the adoption curve presented above. Particularly in 2016-2017, an influx of early adopters came to the party, as the “use case” for Bitcoin was disseminated to a broader audience in a way that clearly articulated the 5 factors that influence adoption. Importantly, the “Triability” factor was refined with exchanges, such as Coinbase in the US, which made it very easy for a mainstream audience to buy Bitcoin (and Ether and Litecoin, for that matter).

For many early adopters, the extent to which Bitcoin (or other cryptocurrencies) provides tangible benefits over fiat currencies may still be up for debate, given scalability issues and slow confirmation of transactions that hit the Bitcoin network in late 2017. However, this issue likely depends on the location of the early adopter. For instance, the benefit of Bitcoin over the Venezuelan bolivar or Aregentine peso is likely much clearer for residents of these countries than Bitcoin’s perceived benefit over the US dollar for most Americans.

A complementary theory suggest that there is a “chasm” that separates early adopters from the early majority. An innovation has to “cross the chasm” in order to be accepted by the mainstream market, which is much more skeptical than the early adopter category (2). To me, it appears as if Bitcoin is at the chasm; and issues such as scalability have to be addressed prior to this innovation being accepted by the “early majority” that comprises the mainstream market. This estimate is below the 16% threshold that separates “early adopters” from the “early majority” and confirms that Bitcoin/cryptocurrency adoption is nearing “the chasm.”

Bitcoin’s adoption in other countries should be similar to that of the US. While it could be higher or lower, I am very confident that adoption still falls within early adopter and is grappling with the adoption issues posed by The Chasm.

The key question: how long will Bitcoin stay at The Chasm prior to moving to more mainstream adoption?

There are a number of catalysts on tap in 2018 that could help move Bitcon closer to crossing The Chasm and include the following (5):

As these developments unfold over the course of 2018, the speed and scalability of Bitcoin’s network should improve over current levels, strengthening Bitcoin’s position among the 5 primary factors that influence adoption of innovation - Relative Advantage, Compatibility, Complexity, Triability, and Observability - as outlined previously in this post.

ANALYSIS OF BITCOIN’S VALUATION ALONG THE ADOPTION CURVE

As Bitcoin moves along the innovation adoption curve and moves closer to mainstream adoption, its market capitalization (price per Bitcoin multiplied by supply of Bitcoin) will appreciate. The chart below outlines a regression analysis of Bitcoin’s market cap vs. the 7 day average daily transaction volume. This analysis suggests an exponential increase in the value of Bitcoin as adoption grows (R2 = 73.8%; not the strongest R2 but still a meaningful correlation and “directionally correct”). 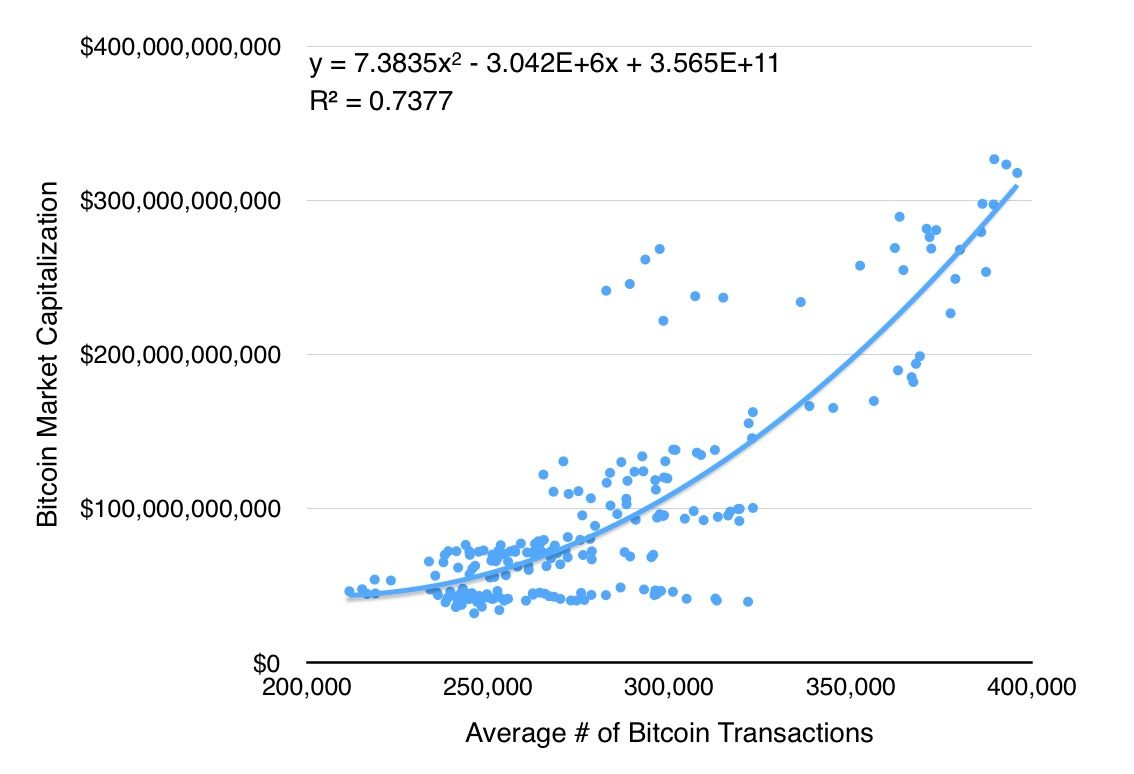 In a previous post, I outlined an analysis of my Bitcoin price target of $50,000 by year end 2018 (8). A key consideration in this analysis was a re-allocation from fiat currencies, as represented by a country’s M2 money supply and traditional investments, to cryptocurrencies. In my analysis, a 1.34% re-allocation from M2 money, stocks, and private equity would create a demand level of almost $2.6 trillion for cryptocurrencies. At a 1/3 share of this market, Bitcoin would achieve a market cap of over $854 billion (or $50,000 per Bitcoin).

While this represents a large move from more traditional stores of capital, it would make sense as Bitcoin gains more credibility among the “early majority” and more mainstream adopters - likely as the speed, scalability, and fungibility of the cryptocurrency improve in 2018 and beyond.

Thank you for reading this article. If you have any questions or would like additional information, please message me or email me at john@ultrablockchain.io.

bitcoin blockchain cryptocurrency cryptocurrencies investment
3년 전 by ultrablockchain32
$0.05
5 votes
댓글 남기기 5
Authors get paid when people like you upvote their post.If you enjoyed what you read here, create your account today and start earning FREE STEEM!
STEEMKR.COM IS SPONSORED BY

hey so nice I really like your post! Thanks for it! I actually wrote my 2nd part of my introduceyouself and I write about that I went to jail because of cryptos... lets make steemit together to a better place with our content! I would like to read a bit more about you and maybe do you have some more pictures? Maybe you upvote me and follow me swell as I do? https://steemit.com/counterfeit/@mykarma/2-jail-review-counterfeit-euro-speeeeending-time

Beautiful post. You express the thought that the chasm may not be far away - at least in the US. Although I would like being close to that moment, my gut feeling is that we are still at the early innovators phase. Cryptocurrency is simply not used enough for commerce yet to gain something close to 13-16% in order to reach the 'crossing the Chasm' event. In my opinion, we are still at the early adopters (innovation) phase with speculative routs every now and then.

Which is fine because that gives us more time to build up our portfolios.

I agree with that assessment. In the US, there is about 13% of the population who has signed up for a cryptocurrency wallet, which doesn't mean that number actually "uses" cryptocurrencies. In reality, if you look at actual "users" of this innovation, it is likely still in the "Innovator" category.

Great article, you should write more often. Would you say we crossed the chasm ?