A general view on Peerity

Peerity is the next "big thing" on the blockchain referred as an “ Activity Network”, a new crypto token focused in community building and using the Tendermint Consensus Engine.
Connecting people, communities and organizations in a Person to Person (P2P) decentralized social network, rewarding the collective activity generated by individuals and groups.
Peerity is a social platform for people integrated into communities, using a next-generation blockchain, crypto-token, allowing high speed and volume of transactions on the network.

"Peerity is an activity network dedicated to making the online social web rewarding instead of exploitative, private instead of public, and creative instead of oppressive." - source: Peerity

Peerity ties together connections between online and face-to-face interactions, creating and building communities by linking reality with the virtual world.
Peerity tokens will be rewarded to people, communities and organizations that use the Peerity platform, based on the quantity and quality of their activities done both online and offline.

Communities in synergy with Reality

Rewarding cooperation inside communities and collaboration between them, but with a new perspective of connecting the activities of social media /e-commerce/ network(online) and actions in the real world (off-line).
This is the first blockchain with this goal of connecting the virtual world to the real structures of Reality, meaning that there is rewards for online activity and off-line actions. 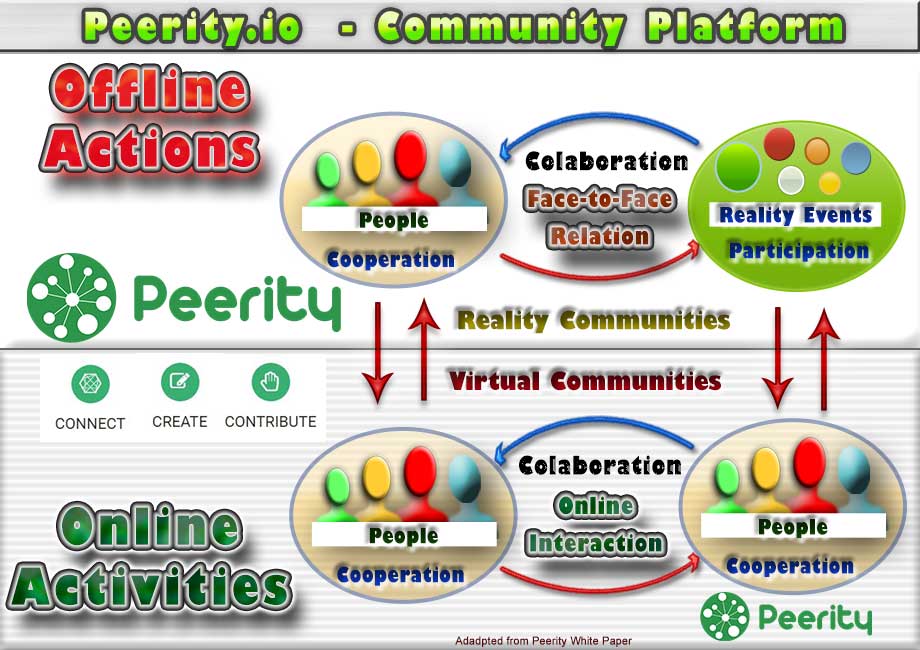 It will be based hierarchical model system of user-created communities at the upper layer based on broad and general interests, where users post content or even create sub-communities in the system categories.Users and admins will create posts to enrich the community experience on the platform.
On the other hand users and communities can organize events and crowdfunding campaigns with built-in crypto-tokens, use it as e-marketplace, post multimedia content, blogging, and commenting on topics and/or regional location and if the user allows it will be automatically added to their area groups.
Groups can choose a governance for commercial goal (creation and maintenance fee) or use the default governance for non-profit communities (free). 
Traffic/views generated in interaction with the content created.
Number and quality of comments and interaction.
"Quality" of content as judged by the system for meta-moderation system and machine learning to measure of how well-written and clear it is.
"Pro-Socialness" of content as judged by the system. Similar to quality, this is more about tone and approach. Pro-Socialness to penalize trolling causing rewards activity to be diminished or stopped. using a a human-driven meta-moderation like slashdot.org.
Reputation: score of a user both globally and inside a community that increases content visibility and payout based on traffic and interaction.
Originality: Plagiarism and data sources will have the user's payout reduced or go to zero. Anti-spam and anti-copyright abuse measure.
Veracity: Algorithm to detect and to penalize inaccurate or baseless data like false advertising, spam, manipulation, propaganda.

For Meetings or events, using mobile phone to verify the event and GPS for location validation.
Organizers of events can provide a code to users who “complete” some event. For a paid event such as a seminar, the organizer could provide the code at the end only to those who paid and attended.
Value of events: If payments are made through Peerity, as a measure to evaluate and reward attendees organizers for their participation.
Sales from events: Events at a Peerity partner location, the value of things sold are used to determine the value of rewards.
Offline activities are more difficult to evaluate online actions but some measurement is possible.

The total online activity and offline actions will be visible in a data stream accessible to all nodes including the user/wallet and values (positive and negative) as signs of their activity on Peerity.

Fluctuation in rewards vs Activity

Payouts will be subjected to the variations of the level of activity on the site and chain, and it must attain some threshold to reward the complete 60% of the token rewards to be paid out.
If the activity is lower then this threshold. If this threshold is not reached, a part of the reward pool will be leveled to payout for the peer server operators, chain upkeep, and stake pool.

The creation of the Peer token is regulated in blocktime, site-wide activity stream and transactions volume activity with a variance from 0.5 to 1.5 peer tokens per second generating between 15,768,000 and 47,304,000 tokens per year.
This helps the stability of the token price by issuing fewer tokens if the price is low and gradual rise when prices are high.
The token will be used to pay for site services, buy and sell in e-marketplace and crowdfunding projects and events.
Governance structure for peerity.io will be after the release of the beta version. 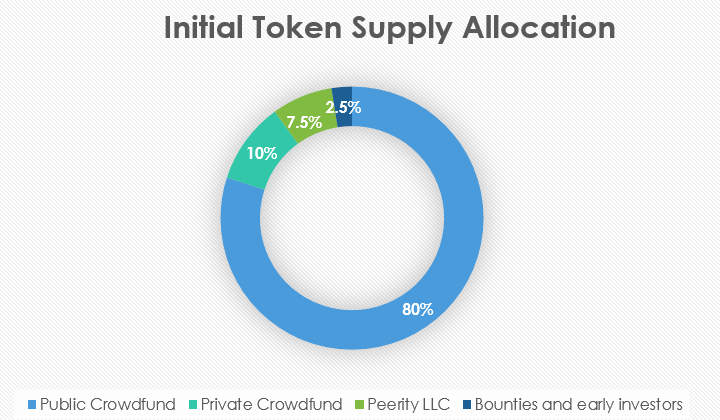 Peer tokens are created, based on the activity level on Peerity.io and get distributed as followed:

Chain upkeep - 5% of the created tokens will go towards the upkeep and maintenance of the chain and website.
Server operators - 35% for Peer server operators validate and commit blocks on the Peerity blockchain.
Activity rewards - 60% are distributed for online and offline activities. 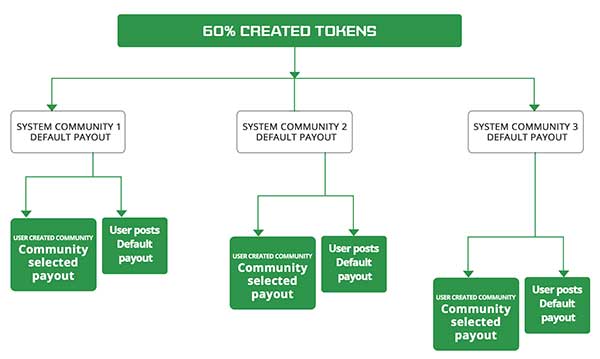 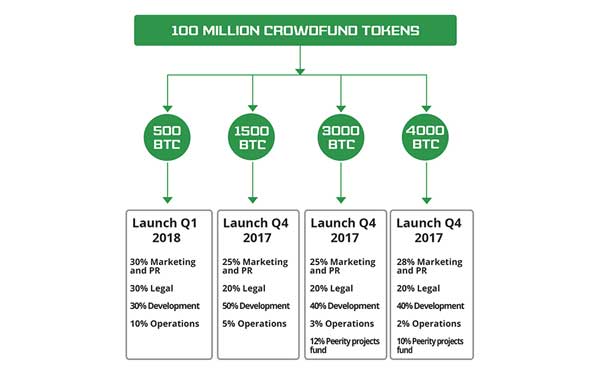 Since I read the Peerity White paper, I felt like being in a new edge of new Social networking on the blockchain allowing the connecting of people offline to perform actions in reality, as well as online for virtual interaction and get rewarded for qualitative analisys of both activities.
The token emisson and distribution will be regulated by the level of activity on the network.

To all the team of Peerity I wish good luck in this hudge work.

blockchain cryptocurrencies platform peerity
2년 전 by charlie777pt64
$2.09
21 votes
댓글 남기기 12
Authors get paid when people like you upvote their post.If you enjoyed what you read here, create your account today and start earning FREE STEEM!
STEEMKR.COM IS SPONSORED BY

Congratulations @charlie777pt! You have completed some achievement on Steemit and have been rewarded with new badge(s) :

It's great to see different takes with social networking and blockchain technology. One thing is for sure: where there is a community, there is value.

We have a lot of new experiences in the blockchain in the area of social media networks stars that will kill media mainstream on the long run.
But Steemit is still the number one star and growing.
Thanks. :)

Thanks, this is an analysis of the white paper of Peerity . :)

Congratulations @charlie777pt! You have completed some achievement on Steemit and have been rewarded with new badge(s) :