So, due to the fact that you are here, on STEEMIT, making use of one of the best blockchains that exist (STEEM) .. you probably agree with us, that blockchain-based technology & applications, and blockchain-based organization of all forms of human effort, is the future! We strongly believe that blockchain represents the means by which we will develop a parallel society and economy, that will eventually replace what is rapidly becoming 'the old-world'. For all the great projects that exist, there are more than a few blatant scams, or legitimate and valiant wastes of time, both of which should be avoided at all cost - doing otherwise can be very costly indeed.

We at CryptoSafely want to introduce people to the world of blockchain investment to those who are new to the technology, so that they can benefit from participation and not become discouraged (or Bit(dis)connected) by over-investing in scams or doomed-efforts.

CryptoSafely has enlisted the participation of some fellow STEEMIANS, so you will see other posts by others - anyone is free to participate, by using "CryptoSafely ICO Information Network" in your title and also use the tag "csafeiconet" - this way we can support worthy posts, by mutual aid upvotes, and the exceptional ones will be profiled on the website .. http://cryptosafely.io and on our Youtube channel (both currently under-development).

Disclaimer: This is not professional investment advice, it is purely the well-researched opinion of the writer, but before making any decisions we urge you to do your own research as well, in order to make the best decision you possibly can. We of course do not accept any responsibility for any losses that you may incur .. or rather that 'we' incur, because we will be investing in those projects we believe are worthwhile enough to bring to your attention. Good luck to everyone and remember, participation in the revolution is how it will be perpetuated.

On to today's subject ICO ..

We feel strongly that Sharpe Capital is worth a look, but sadly it has not received much exposure by those Youtubers involved in the ICO-promotion racket. Sharpe Capital's ICO has been underway for some time now, and in-fact is nearing its end .. Sharpe Capital has a very interesting model .. it is both proof-of-stake 'and' proof-of-work - stake comes in the form of the tokens purchased during the ICO, or via exchange, and the proof of work is participation in the aggregation of user sentiment in regards to price movements on traditional stocks, and in the not too distant future, on the various tokens and crypto-currencies that exist, and in ICOs as well. They have an alpha of their sentiment collection application, which is being used by current holders of the SHP Token, and it is under heavy development and will become quite substantial in the not-too-distant future. 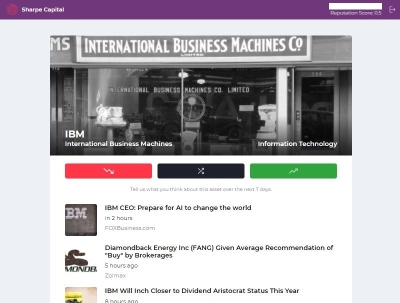 Sharpe Capital also maintains a fund of various tokens the profit from which is used to pay those SHP token holders, who have also provided proof-of-work by using the sentiment collection application (the first of many undoubtedly) - each month, depending on your stake and your work you will receive a monthly payment in ETH, to the ethereum wallet which your SHP tokens are associated with - wallets for which you hold the private key (ie. MyEtherWallet, MetaMask etc.), not exchange wallets. We strongly believe that this is a worthwhile investment, if one is willing to put in the time to provide your opinion on price movements, via the Sharpe Capital application, and if you wish to hold Sharpe Capital tokens for as long as need be to generate an acceptable return on your investment. One of the main focuses of CryptoSafely will be the profiling of blockchain projects that have the potential to generate consistent income for participants - we understand that flipping tokens for quick profit is a big part of the ICO game, but it is not something we have a great deal of interest in.

We are here to support what we see as a revolution in-progress, with great technology being developed which will bring real benefits to people, and our planet. Those of us who are active early should expect to reap benefit, guilt-free reward for supporting the transformation of our world - but we want people to participate in a productive and safe way, not as our ancestors had done during the gold-rush-fever era, not during the much talked about Tulip Mania of old .. but as rational, well-informed, patient but highly-active beneficiaries of this wonderful change.

Please support our future posts if you found what you have read here, of any benefit, and please look forward to much more from CryptoSafely!

blockchain csafeiconet cryptocurrency bitcoin ico
4년 전 by cryptosafely44
$1.82
21 votes
댓글 남기기 7
Authors get paid when people like you upvote their post.If you enjoyed what you read here, create your account today and start earning FREE STEEM!
STEEMKR.COM IS SPONSORED BY

Thanks for the great tips @cryptosafely and to the rest of the network participants. I have an idea for a profile, do I just go ahead and post it for review/approval?

I was invited to join - someone will reach out in Discord, we know where you're at 50. :-)

I was able to buy some before the sale ended - those interested should look for it on exchange soon, sharpe.capital is going to develop into a multi-product org with increasing, generously-shared success.

Way to go and I agree - if you spend some time in their Telegram channel you quickly discover how cool the team is.

CryptoSafely looks like a very beneficial project; keep up the good work!

(I don't think that governments will be successful in banning cryptocurrencies, but they will try nonetheless.by@cryptosafely