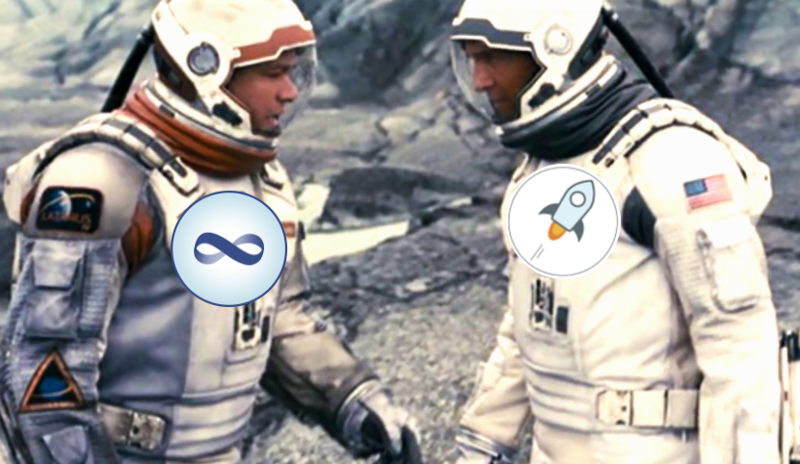 In 2017 Stellar grew by over 20,000% and in 2018 will easily rise to become a top three coin by market capitalization. Stellar’s meteoric rise is significant for Mobius because as the first major token built and announced on Stellar back in July 2017, it will greatly benefit from ecosystem network effects that will bolster mass adoption and growth of Mobius technology.

Back in August 2017 when I spoke at New York Fintech Week, I likened Ethereum to AOL and Myspace and said if you are looking for a high performance and secure alternative it is very likely Stellar (XLM). My views were considered deeply contrarian by most people at the time but they are grounded in pragmatism.

Ethereum is like a 56k modem dialing into AOL in 1997. And that is being kind. The rapid decline of Ethereum and ERC20 tokens — which comprises the vast majority of the blockchain ecosystem today — will become increasingly apparent in 2018. Simply put, Ethereum and all of its ERC20 protocol derivatives are too slow, too expensive, and too insecure to use for any real application. This is highlighted by a litany of examples including the DAO hack (which today represents a loss of nearly $9 Billion USD), two major hacks on the Parity Wallet, and countless other hacks. The CryptoKitties application that brought the Ethereum network to a crawl highlights another key reason Ethereum cannot work long-term — it is too slow to run even a toy application let alone a real consumer or enterprise application with millions of users.

Irrational optimists who tout that lightning or sharding can save Ethereum are unable to point to any functioning examples to date. Plasma, Casper, and sharding on Ethereum do not exist and have been consistently delayed. Moreover, even if the Ethereum team can deliver on its promises it will be too late as other protocols such as Stellar and Mobius are currently supplanting its market dominance through live and functioning faster, cheaper, and more secure high performance platforms.

Since Mobius is built on top of the Stellar Consensus Protocol (SCP) and uses tiered Federated Byzantine Agreement (FBA) for Internet-level consensus, the costs of transacting on the network are exponentially cheaper. Mobius also allows for transactions to occur an order of magnitude faster because of the SCP, which means scalable and cheap use-cases on blockchain such as those Mobius is building are possible today.

Simply put, Ethereum and it’s ERC20 derivatives cannot run any real-world applications because the network can only process ~7 to ~14 transactions per second (TPS) and is at times charging $0.30 — $0.70 per transaction while only becoming more expensive due to network congestion.

Yet there are people in the crypto-community who masochistically support Ethereum based solely on emotional belief of improvement rather than tangible data-driven evidence.

Mobius is exponentially cheaper with near $0 transaction fees because it is built on top of the highly efficient SCP which is live, functioning, and secure today. This makes running consumer-facing applications and processing IoT data via the Mobius Proof of Stake Oracle Protocol (PSOP) feasible — you can even use our live DApp Store right now. Any similar application on Ethereum is not possible, which is why CryptoKitties overloaded the network and Kin bailed on Ethereum. IBM also realized Ethereum’s fundamental flaws and abandoned it for Stellar, a much more reliable long-term platform and partner.

Mobius also fully utilizes smart contracting capabilities without the massive attack surface present on Ethereum. This allows Mobius to build fast, cheap, secure, and scalable applications on blockchain today so small businesses and major enterprises can use Mobius technology without compromising on data security or worrying about existential threats to the entire system or their digital assets.

The rise of Stellar in 2018 will have powerful network effects and only drive adoption of Mobius in the ecosystem because we are built to scale, while already supporting numerous live apps today. Our scalable and secure use cases were something Jed McCaleb, the cofounder of Stellar, noticed when he joined our Advisory Board and became one of our earliest supporters and token buyers.

We couldn’t be more excited about being the first major token on Stellar, because we know it will help us fulfill our mission of bringing the existing Internet into the blockchain ecosystem.

Get your spacesuits ready. blockchain stellar ethereum bitcoin
4년 전 by mrkimjy25
$0.35
2 votes
댓글 남기기 0
Authors get paid when people like you upvote their post.If you enjoyed what you read here, create your account today and start earning FREE STEEM!
STEEMKR.COM IS SPONSORED BY