They aren’t your local aspiring band from the bar on the corner that is about to hit the hottest indie playlist on Spotify, but they are still flaming hot. LINK is the bridge between la gente (people) of Puerto Rico and the Blockchain technology. They skip from one auditorium to another leaving a trace of smart contracts behind. They want people of Puerto Rico to embrace Blockchain before it hits mainstream 2-3 years from now. Everyone who has visited their workshop came out speaking basic Solidity—the language of Ethereum smart contracts—and is ready to pioneer further into the Blockchain seas. LINK workshops provoke people to understand that they can actually do it. _On photo (credit of Fabian Velez): Guillermo from LINK

I’m in the car with Fabián, Guillermo and Natalie, we're on the way to the city of Mayaguez also known as MayaWest (since it’s THE destination on the western part of the island?). Mayaguez is the college town spinning around the UPRM (University of Puerto Rico Mayaguez aka MIT of the Caribbean). It is also home to the biggest brewery on the island distilling your favorite Medalla light. Fabían picked me up at the doors of the P18 accelerator. 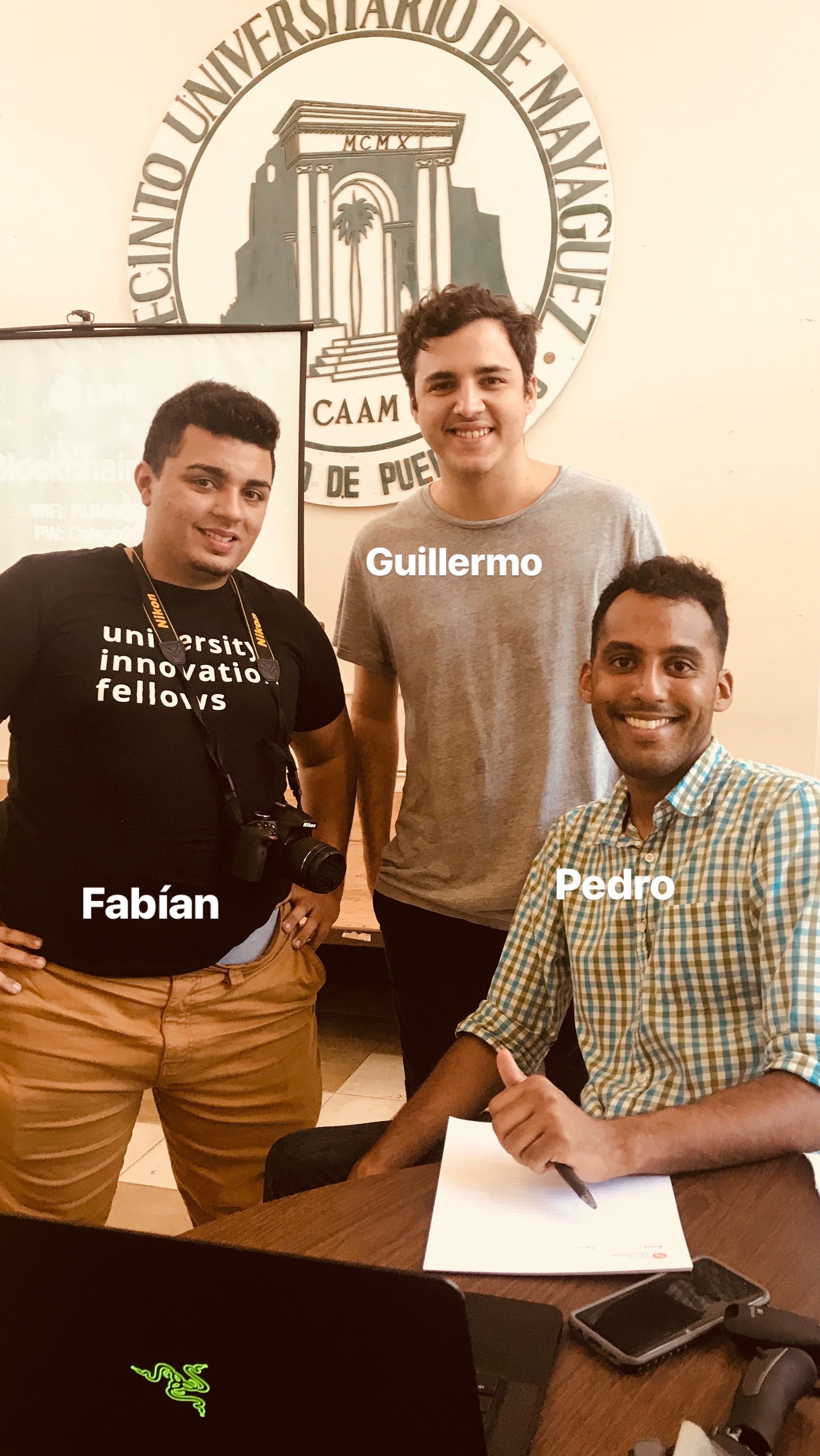 On photo: The LINK Team minus Ricardo 😅

Fabían is a part of the university innovation fellows program which is an educational add-on helping students to acquire the skills and knowledge necessary to compete in the future economy. That's how Fabían—who's been into the computers and tech since 7th grade—got to Silicon Valley to visit Stanford and Google campuses and that's why he gave a talk this morning on “How to turn an idea into something tangible”. It's all part of the university innovation fellows program. Yet together with Guillermo, Pedro and Ricardo whom (we'll meet in a bit), they are running their own educational program called LINK.

On photo: Fabian helping the students out with a pizza factory smart contract

The plan for the workshop is to start off from scratch on what is blockchain, how to implement and what industries will be impacted. We’re trying to foster this blockchain community to start building opportunities on the blockchain.
Fabían Vélez (LINK)

Just like everyone on the island, Fabían has his #hurricanestrong story. His apartment was in Umakau exactly where the eye of Maria was passing. The entire place was ruined and after living for about 3 months with his parents he decided to move to San Juan craving for some electricity. There he met Guillermo on a WhatsApp group “PR tech recovery” and together they've started working on the Token Fund getting deeper into the Blockchain world. Guillermo introduced Pedro to Fabían and then Pedro brought Ricardo on board.

On photo: Ricardo teaching the class of students and guests how to code in Solidity On photo: Guillermo is fixing the Google presentation

The 3rd Blockchain workshop by LINK starts with the speeches. I mingle around and meet some of my friends from Edublock. LINK and Edublock seem to go hand in hand on many events. The guys are filling in the crowd on what is Blockchain, ICOs, tokens, coins, smart contracts and what not. I see Pedro giving a speech. Pedro is a UX/UI designer, crypto investor and an aspiring drone pilot. On the way back we'll make a detour with him to fly a drone over the abandoned pharmaceutical factory. 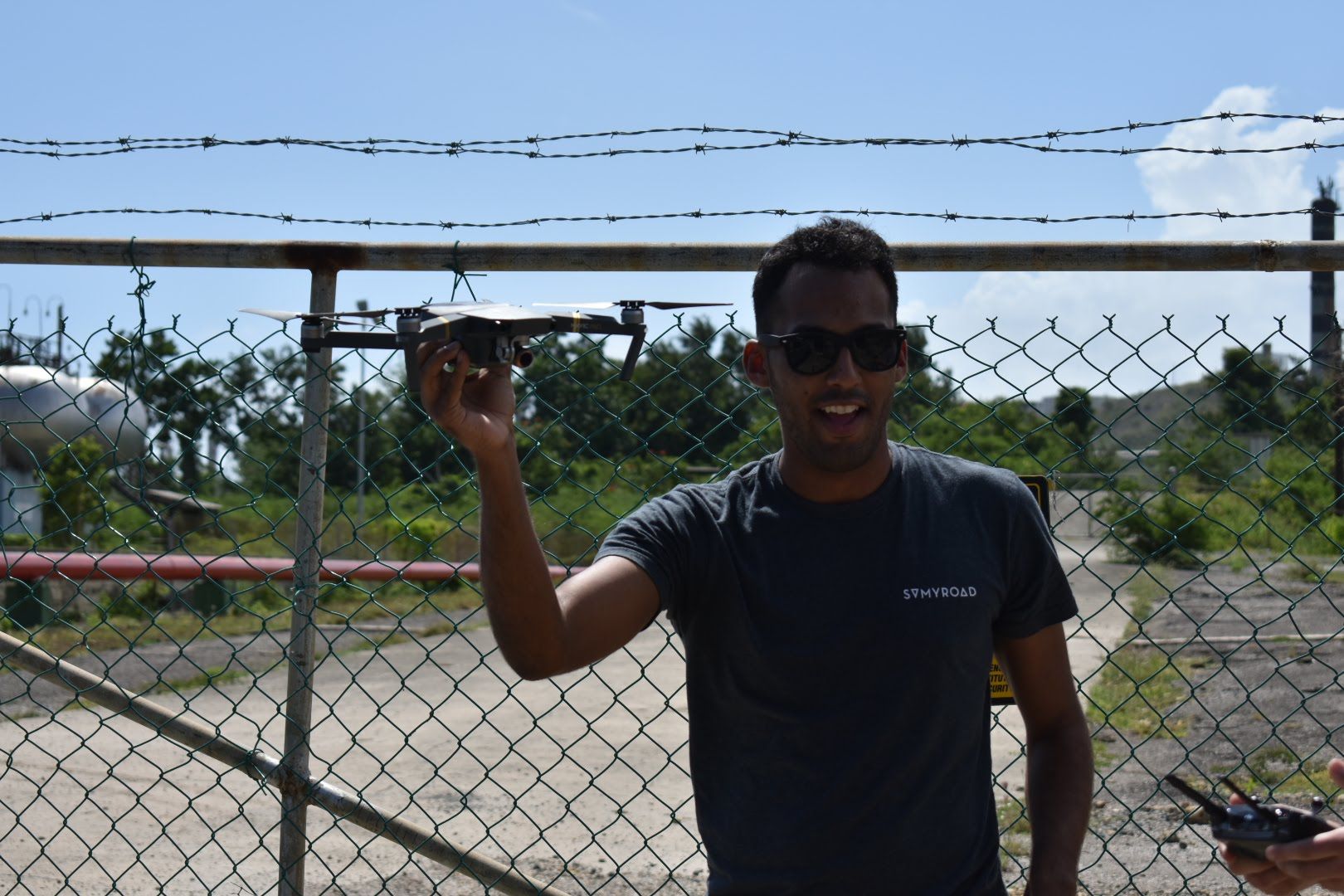 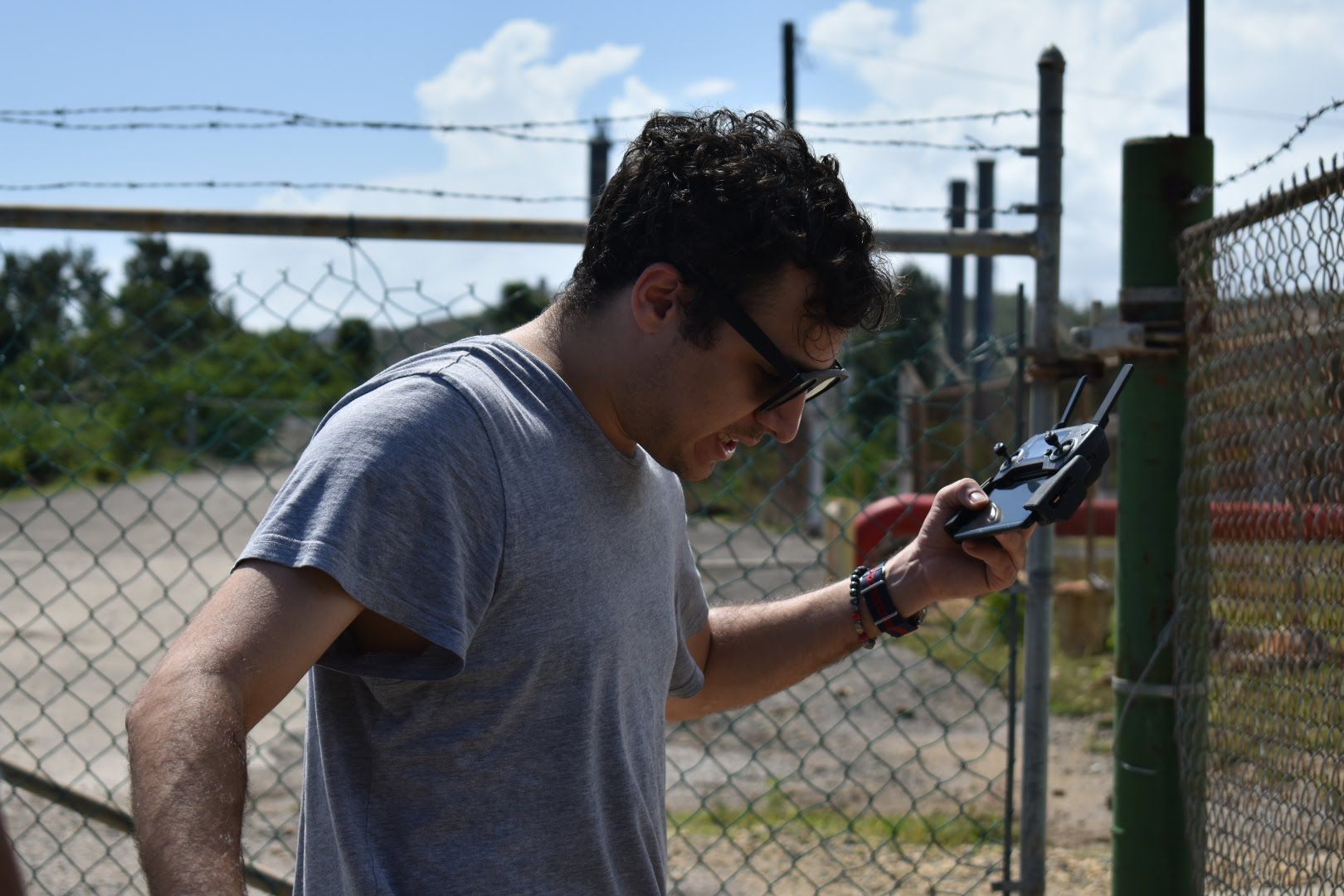 On photos: Pedro and Guillermo launching a drone 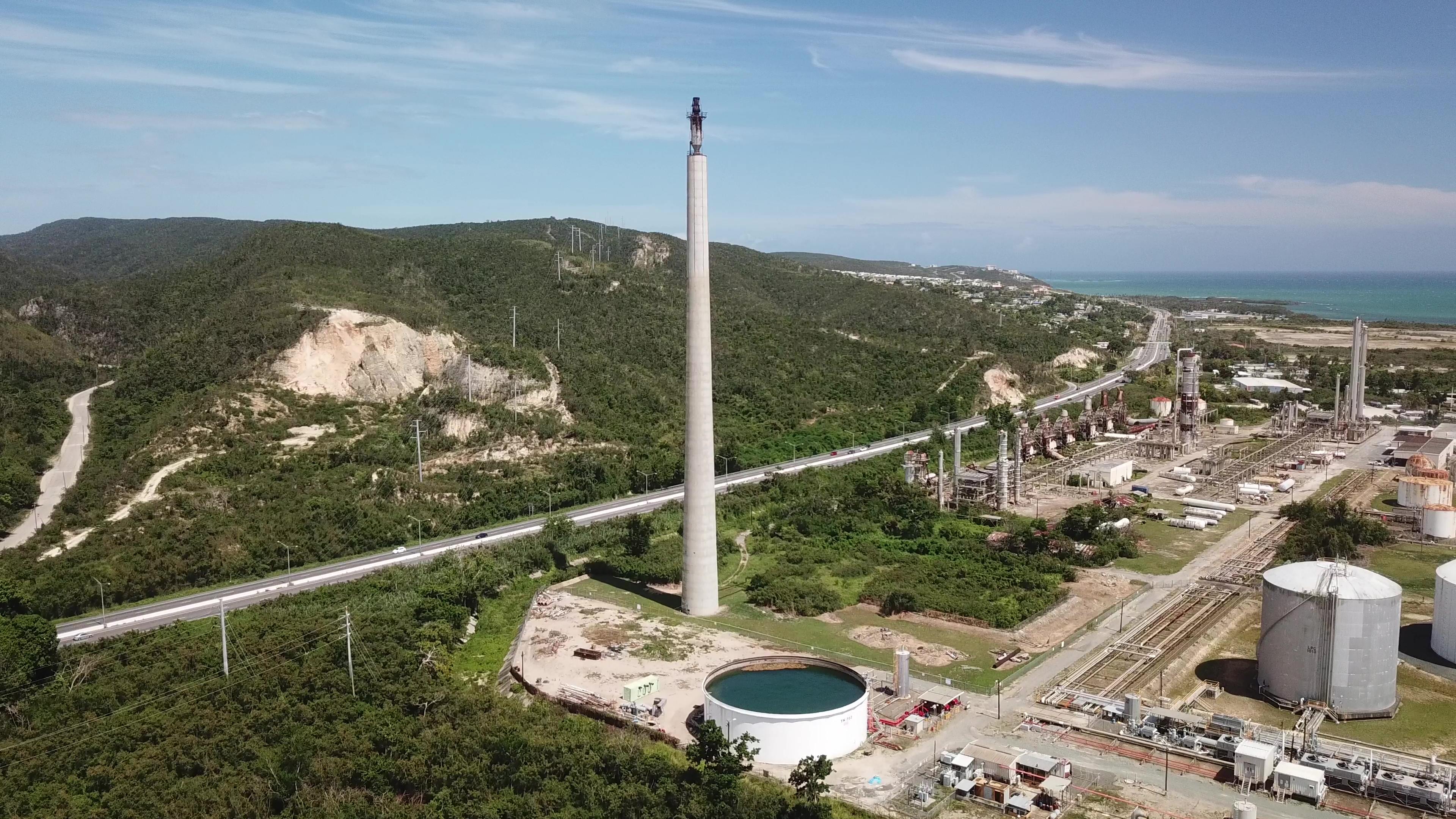 On photos (credit Pedro Cruz): the views of Puerto Rico

I keep exploring the floor. I see some students code, some of them take notes, some of them came with babies. The people on the back around 50 steps away play Nintendo, WoW, Hearts of Stone and Magic the Gathering. I daydream about how the future can sometimes be happening right around the corner and we might not even pay attention to it. 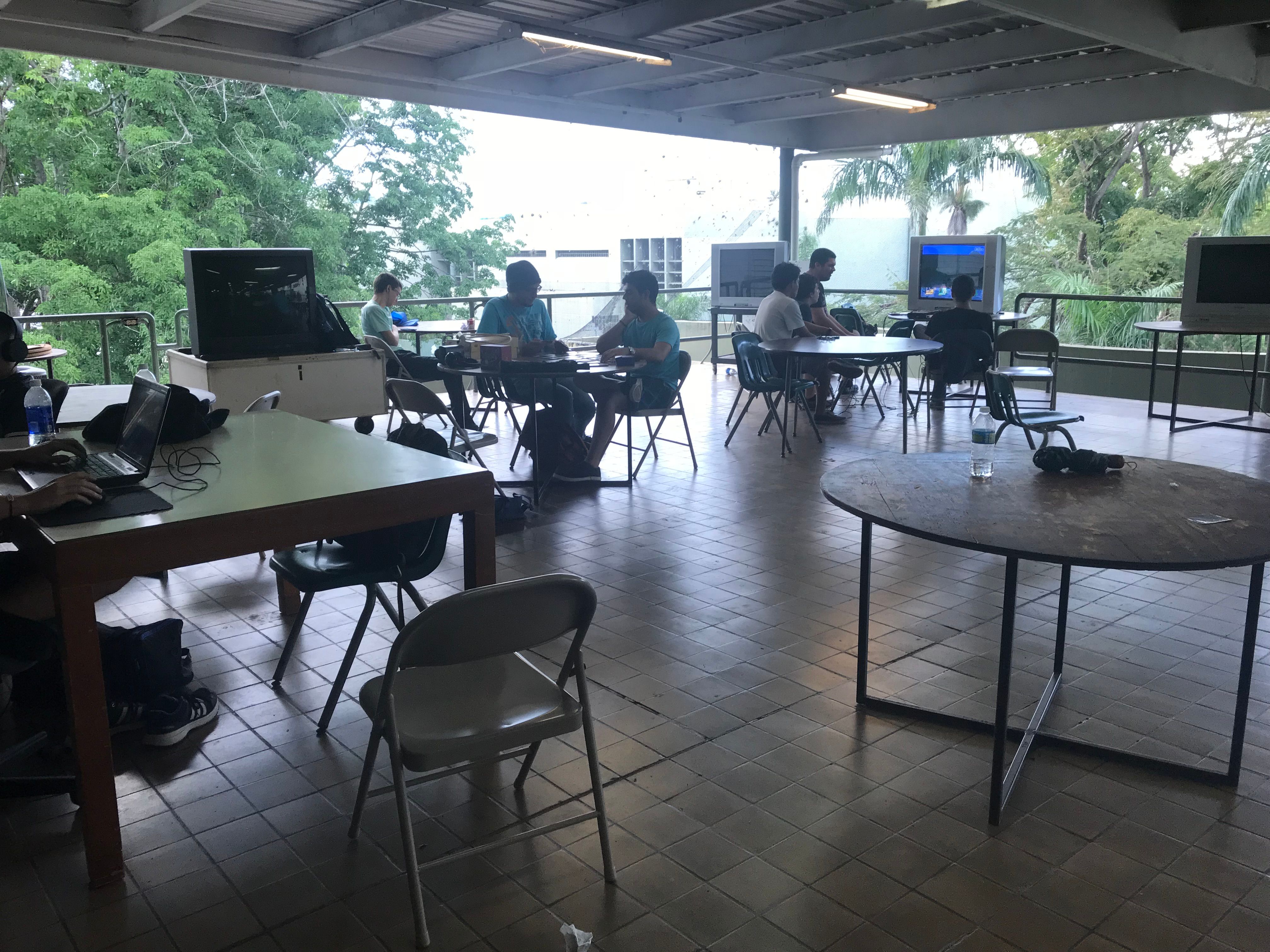 The second half of the workshop is practical and Ricardo is taking over the microphone. Today we’re going to learn how to do a basic smart contract for a pizza shop. Ricardo got into development in 1999. His company TicketPub was one of the first startup exits on the island (acquired by the Bank of Popular). After 8 years of working with the bank he got back to the startup world but Maria got in his way and changed the plans. Reinventing himself Ricardo got into coding smart contracts on Ethereum and that’s how he found LINK. The room looks full but I keep hearing people complaining that it’s actually empty. Apparently, on Fridays, all of the students from Mayaguez go to San Juan for a weekend. Like every other LINK member, Ricardo has a day job, so Friday afternoon is really the only time they can volunteer to educate the masses. On photo: Students looking at the speakers behind the frame

There are magical things happening en la Isla del Encanto (on the enchanted island). After many years of depression, the economy is about to make a leap forward. Blockchain wave is one of the factors causing the economical miracle. But we have to take into consideration: Acts 20, 22, 73, 74, 273, 399, special economic zone, retrofits, privatization of PREPA, underserved tourist and shared economy markets. And if we really want to get deep in understanding the opportunities we’ll have to recognize: P18 incubating 40 startups every 3 months (investing 40K into each one), bilingual culture of the island making it a perfect launchpad to the Latin American markets, microgrids allowing to flip the electricity distribution, and many other constituents. Puerto Rico is a classic example of a Booming economy. Those who understand the potential are hustling around the clock to make things happen while the bonus level opportunity time is ticking. The teams behind LINK, Edublock, and Hacker House are some of the local forces taking part in a marathon for Puerto Rico 2.0. And my goal on the island is to make sure their stories get heard. 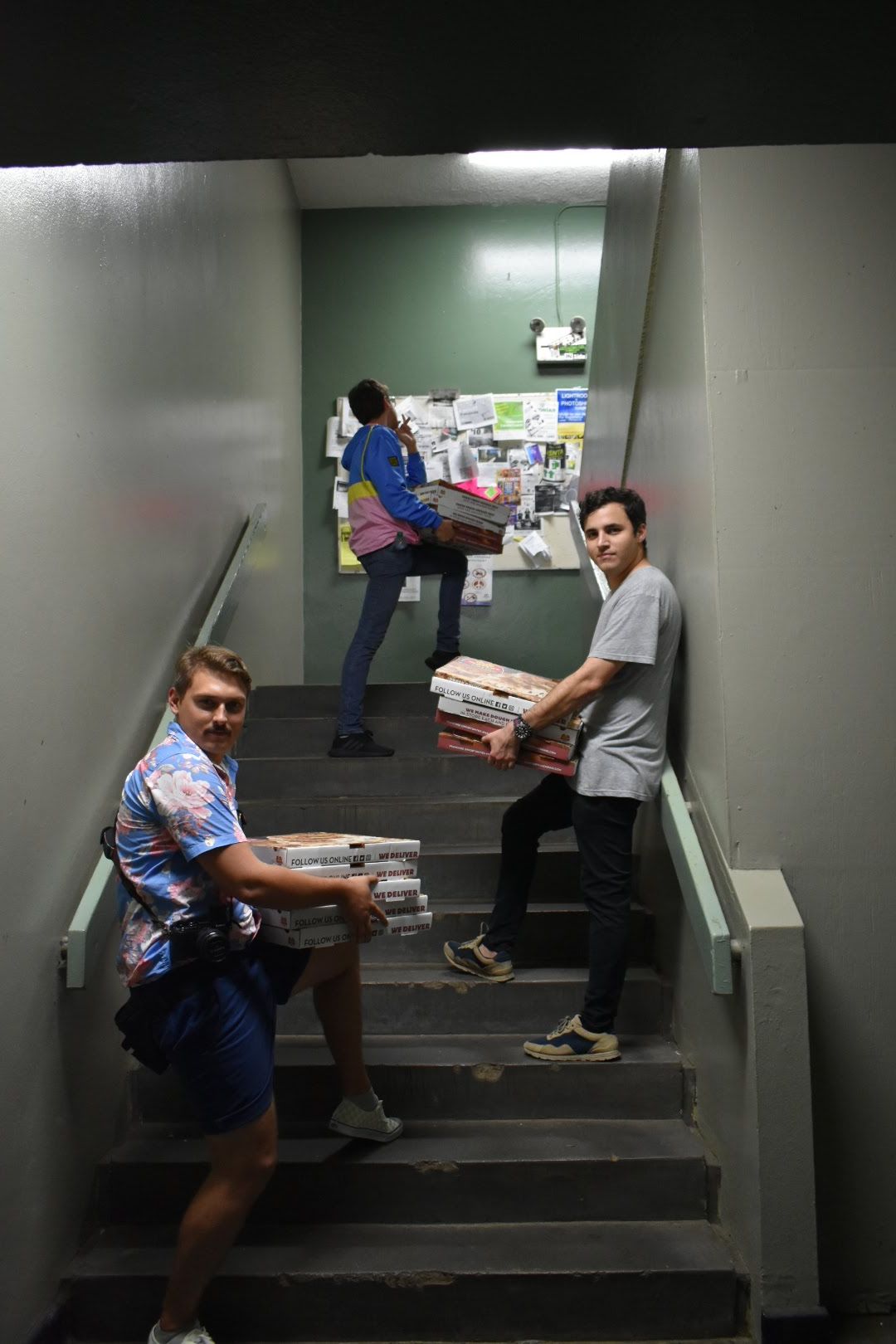 About the Project: People of Puerto Rico 🇵🇷

Boricua is the land of beautiful passionate people (la gente) that really love to share stories. Unfortunately, those stories are not really known outside the island’s community. The project “People of Puerto Rico” is a community-driven initiative to collect and publish the modern Puerto Rican folklore for the rest of the world to and the future generations to reference. Steemit is the place for valuable stories!

Hi! And thanks so much for reading. If you would like to support this project please upvote, resteem, or tag your friends in the comment section. I want to make Steemit the better place for international narratives about our present time. If you have a story to share feel free to DM me on Twitter @kirillkich I love interviewing people and telling their stories.

blockhain life steemit story kirillkich
3년 전 by momentocat53
$55.13
44 votes
댓글 남기기 3
Authors get paid when people like you upvote their post.If you enjoyed what you read here, create your account today and start earning FREE STEEM!
STEEMKR.COM IS SPONSORED BY

Congratulations @momentocat! You have completed some achievement on Steemit and have been rewarded with new badge(s) :