So I was fortunate enough to have a friend of the family ask me and my dad to come help install some fireproof doors down in Florida over the weekend.

You don't have to ask me twice if I want to trade 14°f (-10° c) mountains for 75°f (20°c) Beachfront. So at 9 o'clock Friday night we loaded up our steed with tools and snacks and did a cannonball run to the Florida east coast. Buy 10:00 the next morning I was enjoying pancakes at one of my favorite restaurants in the world, Sands on the Beach. (Melbourne)

One of the best things about this place, other than the great menu is that its, as the name implies, on the beach.

So with my full stomach, I strolled down to the water, leaving my adult self behind me on the dunes, as I suspect we all do at the beach. Or is that just me?

It didn't take me long to realize bright florescent blue trash bags everywhere! But they weren't trash bags. Oh, wait, they are jellyfish!

A quick google search turns out I was wrong again.

They were, as some of you may have guessed, Portuguese man o' wars. I had heard someone call jellyfish a man of war before. I think it was in The Life Aquatic With Steve Zissou. But seeing how there's not a real sea creature in the whole movie, other than the dolphins and research turtles, I never thought anything of it.

So why are these little gel sacks named after the largest sail driven battleships?

(Now, I consider myself a guy with a reasonable amount of knowledge but I wasn't expecting this.)

Because like I stated above these are not jellyfish at all. not even close. Where a jelly swims through the water. A man o' war sails on the surface, utilizing the wind to move them along. They actually have a sail that they can retract. This is also why they sometimes end up on the shore in massive amounts, apparently.

Sadly the ones I was looking at had already perished and their sails had "deflated". You can still see it though, it's the pinkish stripe thingy. 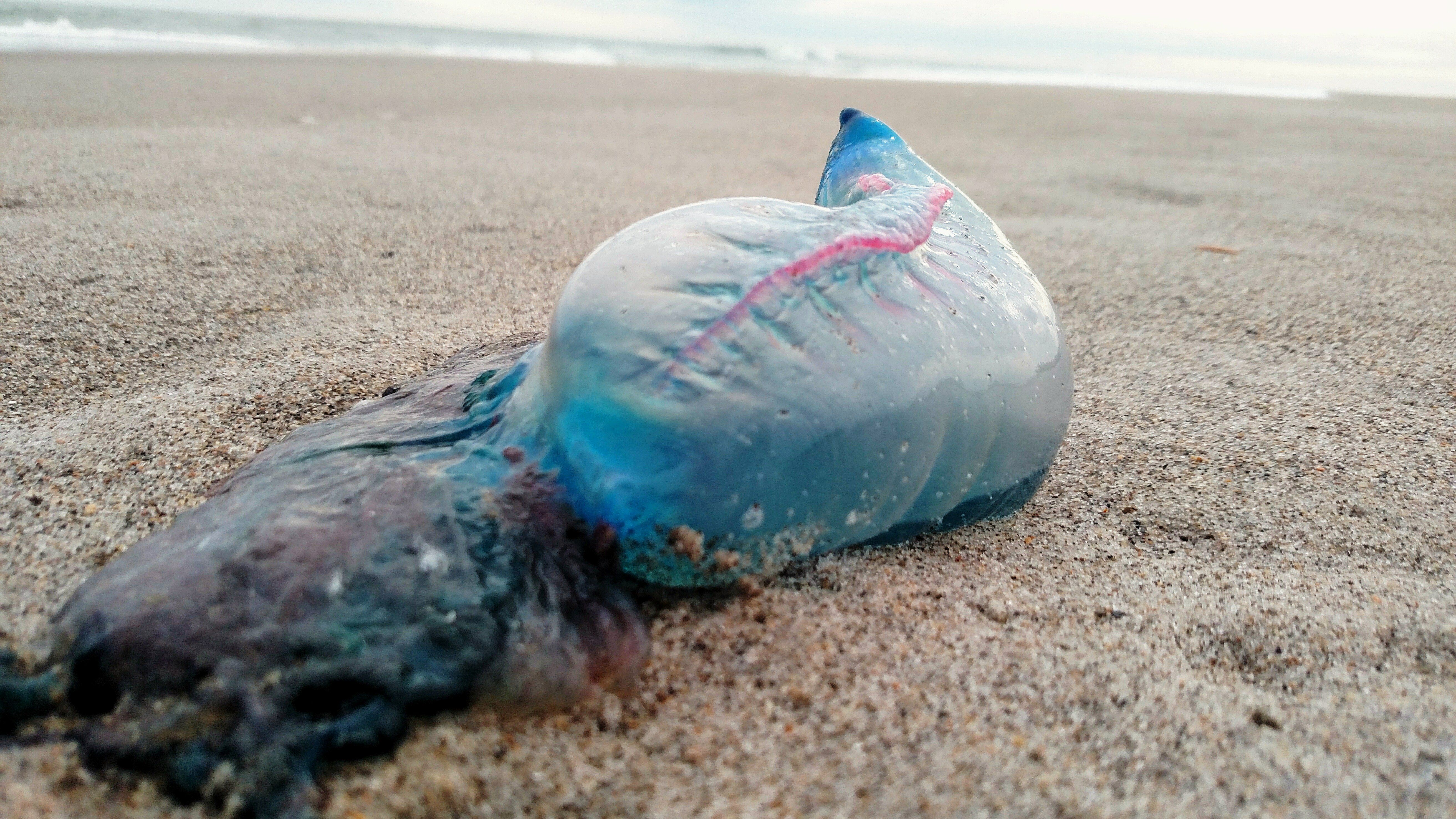 (Bad picture I know but I didn't have much left to work with and I not to into stealing content.)

But what really Astonished me was they are exactly that, a they not an it... Or what is known as a colony organism. They are in fact multiple creatures called polyps living and working together each fulfilling a task the other can't perform and cannot survive without the other. Together forming what looks like and acts single being.

I had never heard of something like this. And I'm a sci-fi geek!

I tried reading into more on how we as humans know that they are different creatures inhabiting the same body, but it got a little bit beyond me. But if any of you can explain, please do below.

This national geographic article I just found has some good pictures of live one's sails and all. And now that I read it is close to what I just typed Haha.

Anywho. there is much more that can be said about these pint size battle crusers, but I like to keep things short. So I hope I've activated you enough to go find out more about these fascinating surface dwellers on your own. They really made my morning.

Oh and by the way, No thouchie! These things are very venomous. you may feel fine at first but you most likely end up in the hospital instead of at the beach bar.

Thanks for reading and don't forget to ride the bear! blog nature travel story science
3년 전 by grizzlynaut33
$0.20
5 votes
댓글 남기기 1
Authors get paid when people like you upvote their post.If you enjoyed what you read here, create your account today and start earning FREE STEEM!
STEEMKR.COM IS SPONSORED BY

Great read and info thanks.