Challenge Coins - The Truth? No One Knows

A Medallion, A Token, A Coin
What's in a Name?

A few years back I was invited by a family member on a Tiger Cruise. To anyone unfamiliar with the term, it's U.S. Navy lingo for bringing the family on a short vacation with their military member. It's a morale booster!

The Trip was Short but absolutely FUN!

It was the 4th of July and we were able to see the nighttime fireworks from Virginia Beach oceanfront. The supply ship did double duty as it was on a humanitarian mission to welcome foreign ships to the region. All families witnessed a refueling. What a tremendous adventure! I might add it can be very dangerous to the sailors doing the refueling.

We were all able to go the onboard supply store. While there I purchased a challenge coin. I knew nothing much about these coins. 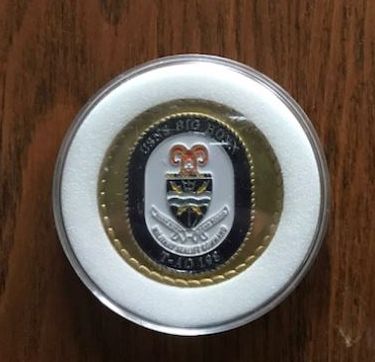 This is the obverse challenge coin for the United States Naval Supply Ship (USNS) Big Horn, part of the Military Sealift Command from Norfolk, Virginia. The Tiger Cruise ended with supper on deck. I love the ocean blue-and the U.S. Navy!

Later on that week I did some research on challenge coins. To my surprise, the history of the military challenge coin is a legend, a myth, a mystery.

Some stories date the idea of the challenge coin as far back as WWI, while a more popular story engages the WWII Office of Strategic Service personnel (the CIA predecessor) who were deployed in Nazi held France. The junior officers of the 107th Infantry also claim origin of the challenge coin because presenting the coin during war would give bona fides (truth) to the claim of membership in the infantry.

Still, some U.S. soldiers serving in Vietnam take title to the original challenge coins for the reasons of proof in battle. This is the most popular among soldiers because the loser had to buy a round of drinks. Coin Check.

Nowadays there is not much challenge involved as there are many mint companies that produce these low-cost coins for businesses, schools, and institutions. Regardless of the coins beginnings, they're fun to collect and trade. Many servicemen and women proudly display their coins depicting their various duty stations, ships and commands. 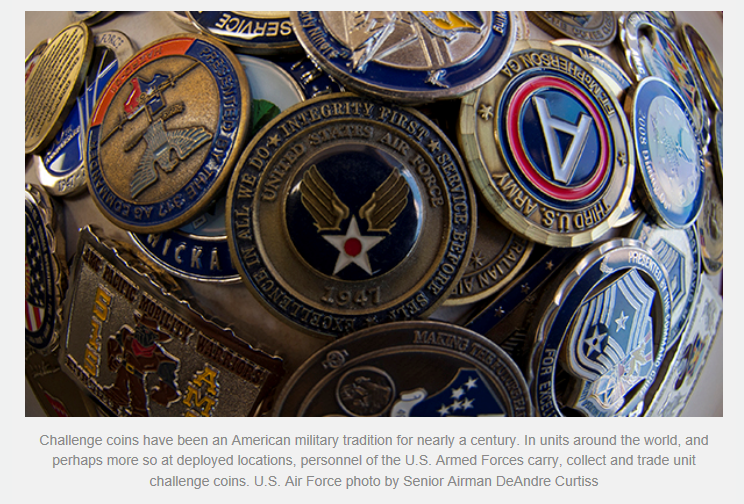 Info source
blog fun military hobby
2년 전 by quiplet44
$0.82
7 votes
댓글 남기기 2
Authors get paid when people like you upvote their post.If you enjoyed what you read here, create your account today and start earning FREE STEEM!
STEEMKR.COM IS SPONSORED BY

Thanks to @quiplet
We have planted already 6418.56 trees
out of 1,000,000
Let's save and restore Abongphen Highland Forest
in Cameroonian village Kedjom-Keku!
Plant trees with @treeplanter and get paid for it!
My Steem Power = 18703.94
Thanks a lot!
@martin.mikes coordinator of @kedjom-keku