We all know Android sucks. But that Samsung hardware though...

I have a big beef with Samsung phones and the Android operating system now. I've had the best devices for Android and Apple's iOS--both systems at the same time for development--and all I gotta say about the operating system, ecosystem, and hardware: it's all trash. Compared to Android devices, Apple really goes out of their way to give you your money's worth and the best user experience for a PHONE.

I apologize to speak so insulting to Android users. You all must be going through a serious case of buyer's remorse to like these things ;)

Oh btw, my Samsung Galaxy S8 has cracks all over the screen. A screen that I have never. EVER. Dropped. Apparently I have the most destructive front pocket in the world... yet even with the previous iPhones of mine, I have never cracked a screen. Except that time my phone was launched about 20 feet ;x

It is my wish to serve you with these words!

Some info about me: I've been involved with Bitcoin since 2010. By trade I am an expert on blockchain technology. I am the Project Director for Wall of Coins, and CEO for Genitrust, Inc. I eat primarily fruits and leafy greens ("fruitarian"). This is known as a frugivorous diet, which is the diet by design of the human species and most primates. I don't cook my fruits, so you may also call this "raw vegan". I have eaten virtually every food item and major cultural style on this planet. I have experienced long periods of many different diet regimens: acid/alkaline, ketogenic, vegan, etc. In my spare time as a child, and an adult, I truly relished reading articles, books, and research papers on nutritional observation. I also enjoy and frequently practice long periods of juice fasting, water fasting, and dry fasting.

blog technology android writing review
3년 전 by robertgenito59
$23.78
15 votes
댓글 남기기 15
Authors get paid when people like you upvote their post.If you enjoyed what you read here, create your account today and start earning FREE STEEM!
STEEMKR.COM IS SPONSORED BY

Actually when it comes to phones Android beats iOS everyday. Since when it comes to phones you want an open system where you can experiment with lots of stuff. The iPhone can’t even send a file over Bluetooth. Which is sort of like a joke. It was true that iOS was faster than Android like 2011. But Android has been caught up and now is even more smooth many times than iOS.

Apple’s iOS could have been amazing but they didn’t like the jailbreak community so they ruined all the fun! iPhones are fun when it comes to when they are still open and you could jailbreak and install cool tweaks.

I do agree that Android is a constant work in progress and can be a bit glitchy. But at least it gives people freedom to simply connect it to a PC and quickly use a file manager. For an Apple phone that is super complicated.

The quality of iOS apps can be a bit higher mostly and that is nice. I do prefer Apple when it comes to Mac OS but on a phone I want a more free open experience. Mac OS beats Windows 10 times over in how classy and how well it performs.

Apple’s computers look nice but their phone’s look a bit like a joke Samsung creates more cool designs. The iPhone looks like a candy bar. And traffic light design must be the most silliest thing I have ever seen.

Samsung is going downhill with glass back and non removable back and they are raising the prices just like Apple. Samsung camera is much better than the iPhone. I feel handicapped with a closed phone that’s why I can never go with Apple phone. You can’t even zoom in on photos in the Apple phone compared to Samsung phone.

Apple phones are boring nothing exciting has happened for years. At least Android phones are constantly experimenting with new cool stuff. Everything is too polished up in the App Store. Too little excitement. Apple is a bit becoming the new Microsoft.

You can now get a quality Android phone for 150 euro price range. So both Samsung Galaxy Note 8 and iPhone X are priced too high 1000 euro what a joke! And please we don’t want glass phones.

My Samsung Galaxy S8 glass back also broke can’t stand when Sammy is using glass. They should use metal like Galaxy J5 2017 or like Huawei Mate 9. Huawei is the best Android company at the moment. Samsung is getting lazy and sloppy.

The thing with Android is that if you know what to buy (Huawei Mate 9) then you will be really happy. Samsung is not cool anymore like they were 2012. Apple was cool 2009. Now the Chinese brands will be taking over more. Finally something new is happening!

With Android you need to do deeper research and not buy the popular brands. But instead buy from DOOGEE or Blackview. Which produce amazing software and massive battery of 5000mAh for less than 150 euro. But it takes some deeper research. Android is exciting because it takes some digging and you can find out cool stuff. And how it’s always a work in progress. Microsoft gave up on Windows so it’s no longer a work in progress. They need to rebuild the OS from scratch because it’s just so buggy and bad 2018…

brah, do you even iPhone?

Only my iPhone 7 Plus just because the Steemify app is only available in the app store for the moment so as of this moment the iPhone actually serves me a purpose! 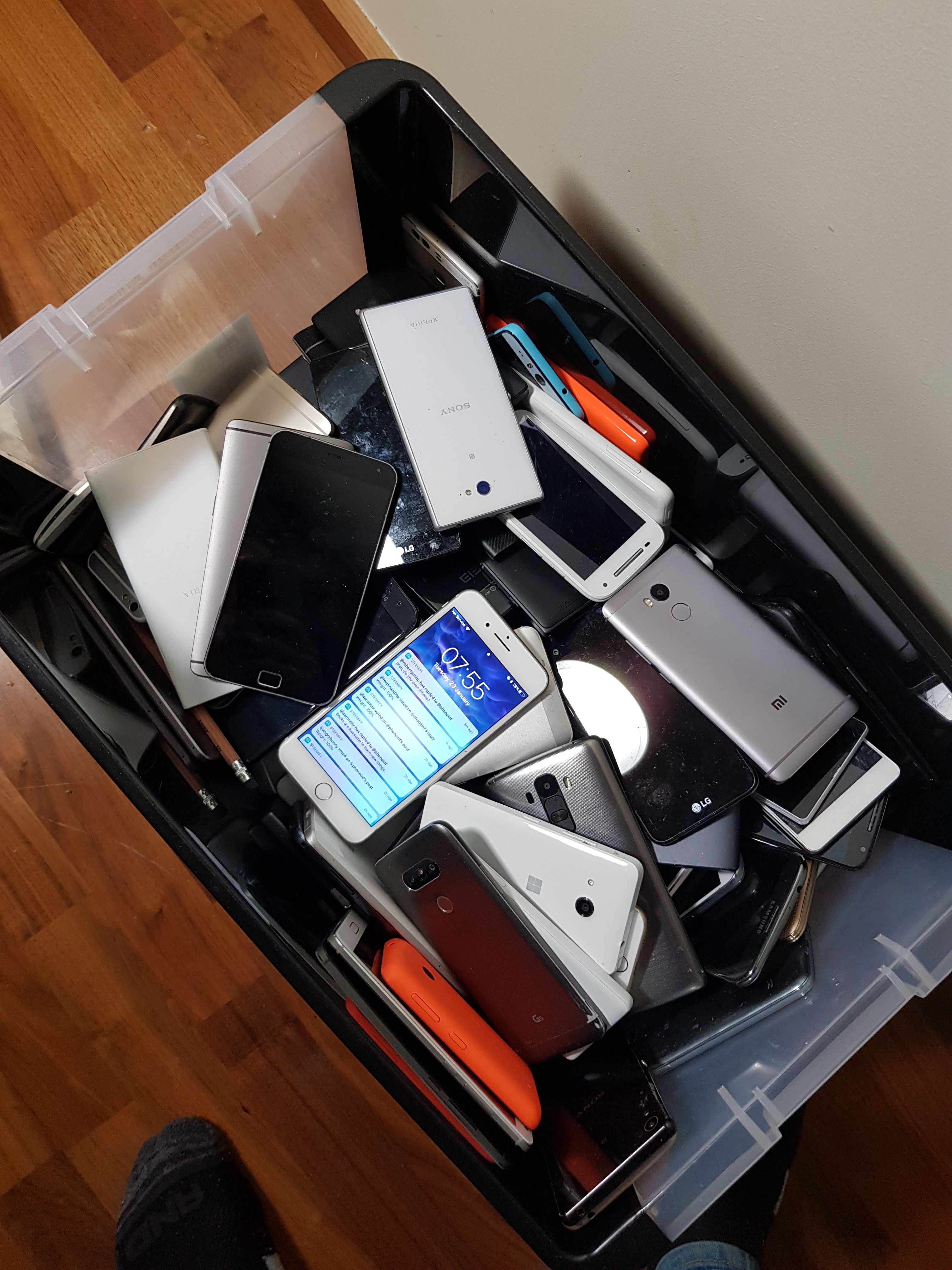 Giving ya a full upvote for that one :) and you gotta lot to discover and get excited about with the iPhone ecosystem, my friend!

Any special features it has? Even 150 euro Android phones now has face unlock.. And glass back.. just like Samsung will break. BlackBerry on the other hand still are the best when it comes to cool unique design instead of just pushing in a boring display at the front.

iPhone's still have the same design as they have had since iPhone 6 2014 it starts to become a bit boring... But new emojis maybe it has that are cool ;) The front bump on iPhone X and glass design is new. Glass just as iPhone 4S that will make the phone break faster great...

I get it that eventually you may wanna have something that "just works" and then iPhone's are great. They do put in quality work in their software I love their programming language swift and it's super well made. But I want to see something exciting from Apple 2019/2020!

And phones can be fine going for 1000 euro but then I want to see some rare features that cheaper Android phones cannot do. And yes probably at rendering video the iPhone is sharper too but not enough to make a full switch to render all videos on a mobile haha.

I want to see an iPhone with a stylus just like the Galaxy Note 8. And that is built into the phone. That would be a unique feature. And useful feature as well.

At this photo I clearly would say that BlackBerry has a better eye for design. Apple do phones a bit easier to understand that the mainstream masses could buy into. ;) I am using adroid for 8 years now, mostly Samsung, but now a Lenovo P2.
This is really good.

It can do everything I want or need and more. ( just the way apps work together and be able to share data between each other is far superior to Apples way of doing things.)

My friend has an Iphone4, Iphone5, Iphone6 and in my experience these Apple things are pure HORROR!

When she can't get something done she asks me to look at it and then I come to the conclusion that this IOS is so limited and poor to understand.

She wants to give me the pictures she makes with it: next to impossible to get something out of an Apple device.
Personnaly I have never understood why Apple should be the most valuable brand in the world, or be called innovative...

So bottomline: I stick with Android as an operating system and choose whatever brand for the hardware, be it Samsung, Huawei, Lenovo,or any of the 100 other possible choices!

These phone companies are keeping that backlog when it comes to screen is that they want you to purchase add-on like Tempered Glass and stuff.
But when you go with Gorilla Glass 4 and above with any Android device it will smoothly work,
But someone who can afford to buy iPhone then it's better but I am really not sure if that iPhone glass breaks or not.
So if someone is interested in getting Android make sure it has Gorilla Glass or similar or elsewhere they need Tempered glass.

Totally agree, What Apple provides is a complete package of all your needs and thats not easily achieved for sure :)

Yea man, Apple deserves nothing but praise. They took huge risks ever since the beginning and they continue to take huge risks today. And everyone just copies them...

thnaks for sharing your view on android and iphone

It's in their best interest that it breaks so we have to buy a brand new phone... Just replace the glass they probably charge 250 euro for..