Do You Need Money to Make Money?

There are a lot of people who wanted to start their own business, but there is one thing that stops them. It's the lack of money. Many People I know has a vision in mind of what business they would like to put up, but every time finances is on the look out, they stop and fear that they wouldn't be able to do it because they do not have the money to start. 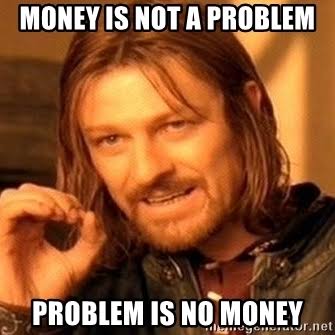 Do you think every successful people we know of, had the money then, so they became successful now. Harland Sanders a. k.a, Colonel Sanders was broke all his life. His famous chicken recipe, is the only thing that made him the famous KFC now. He didn't have the money, but he had a recipe.

Joanne Rowling a.k.a. JK Rowling, is a single parent living on government welfare is one of the most successful author in the world. Her Harry Potter Series on books and on screen took us by storm. She had no money then, living on social welfare'benefits and has been rejected so many times. What does she have? The passion
for writing and the imagination. She is now the famous JK Rowling and is written in the history of mankind.

Walt Disney was a farm boy, who used to draw pictures for his neighbours for money. He used to be a cartoonist for his school paper. He was jobless for a time, and now Disney is a household name. No child ever grows up without knowing Disney.

And who would not know Steve Jobs, the Apple Founder. He was given away by his biological parents for adoption. He dropped out of college, as it costs his Foster parents a lot. His technical tinkering started at their garage, returning coke bottles for money and having free meals at Hare Krish a Temple who would have thought that Steve Jobs would set the standard in computer and cellular technology.

What do you think these people have in common? All of them started with no money and all of them have been successful in their own right. More than money, these people have vision. They have dreams and they fueled their passion to create something valuable to mankind.

This is what separates successful and unsuccessful people. Unsuccessful people wait for money, wait for good things to happen before they act. Successful people works towards their goal even when empty handed. They know that their idea, their passion and their determination is enough to reach their goal. It's not easy neither it is fast. It took them a lot of hard work and a lot of heartache to get to where they are. And that's the price they are willing to pay. So the next time you think that you need money to start whatever you have in mind, remember Col. Sanders, JK Rowling, Walt Disney, Steve Jobs and many more. I hope they inspire you to continue to reach your dreams in spite of any hindrances there is.

business entrepreneurship money finances steemit
2년 전 by chillinph52
$5.11
19 votes
댓글 남기기 16
Authors get paid when people like you upvote their post.If you enjoyed what you read here, create your account today and start earning FREE STEEM!
STEEMKR.COM IS SPONSORED BY

Yes, it's true you need money to make money. Something I'd like to add, each one of these eventually became entrepreneurs in their own right. It's a pattern many successful people seem to follow.

Elon Musk, CEO of Tesla and SpaceX. Steve Jobs, CEO of Apple and Pixar, Jeff Bezos, CEO of Amazon. But even if we don't look at corporations, J.K Rowling is her own brand with Harry Potter, and in this way she is her own business. Gordon Ramses with his restaurants, and 50Cent with his music.

At the end of the day, every person is looking to survive in their own way. This is what entrepreneurship is about. If you do not want to work for other people, you will have to become an entrepreneur one day.

Thank you so much for the insights! They are all successful entrepreneurs now given all that they have been through. They all inspire us to pursue our dreams even when we don't have the means.

Oh thank you so much @nathen007. I'm good but need to stay up late to motivate myself to write for steemit. Hahaha. How bout you? Hope you are fine as well.

Im good thanks, I also find the best time for peace and quit to concentrate is after midnight too lol...eat when youre hungry, sleep when youre tired and work when youre motivated !!

yeah, but in thats all, they have unique mind and wont be part of following. they creating with passion and never stop to endeavour. and not have any cup care of negative speech to them.
lovely narative, keep inspire people

Yes they really are inspirational to many of us. We just need to know how to monetize our passion like what they did. Thank you for taking the time to read my post @omarkhayyam

you too, me as well as you, just on trying to make something, that would be motivating other people. and thanks to writting inspirational thing to i read for my midnight (i am kind of nocturnalmen)

ResteemBot's Maker is Looking for Work. Yeah we're working on it!!! We'll get there soon too!

couldnt agree more. need to have the vision first, give first then you shall receive. If you want to make 1billion $ you need to produce sth that is of value to at least 1 billion people. Nothing comes from nothing. A change in your life only comes if you make a change. Want sth new? Got to do sth new. The laws of the universe are quiet simple, we just have to jump over our fears and pride.