Gardening Noob #2, I'm Back To Square One. Yay.

Hey everyone! In this post i'll be talking about my journey in trying to beautify my home. Specifically i'll talk about landscaping the front of my house and how I have failed so far. Original Image Source
My house is a typical Chicago Georgian. It pretty much looks like a box. In my neighborhood there are only a couple types of houses all built in the 1940s. I envy newer built homes often because they are just more visually appealing. My house does not have an open floor plan, also the "main" bathroom in my house is located upstairs. There is no bathrooom on the first floor (and no room to add one.)

No modern built house would ever not have a bathroom on the first floor of a home, its just strange. Anyways... I'm rambling.

Now to the outside. I decided the best thing to do to try to make the outside of my house prettier was to add window boxes. They are the self watering kind and very well built. Taking off the canopy off the front of my house and adding the window boxes was the least expensive way of adding some curb appeal...


Here is my house before: We removed the horrible bush in front. We also added shutters.
Here is how it looked last year in July! I decided to plant Boxwoods in a pattern in front and bought 2 Alberta Spruce trees to flank the window box. I knew the Alberta Spruce trees were "slow growing" but its almost been a year and they look exactly the same as they did before! I don't even think they grew an inch. The boxwoods (I bought the smallest ones because they were the cheapest) turned brown...so..I had to rip them out! They were dead! There is one lone survivor Boxwood in the middle. I don't know what I'm going to do with it...
Ugh! So here I am starting over....(What a waste of money that I could have spent on crypto instead, lol!)

What's left after the winter So, let's recap what I have learned.

If you are going to spend money buying shrubs...know what you are doing first, lol.

In the next post I will start sharing what I have learned about planting shrubs around your house for curb appeal, and how I am going to try AGAIN to make my house pretty in the front without planting a couple large bushes and calling it a day.

Stay tuned! I hope that everyone is doing well. I know that I haven't been active on Steemit lately but I really do love it here and need to find the will to start writing again :) I am always happy to read your comments no matter what subject....so comment away so we can chat!
Emily

busy gardening diy life blog
3년 전 by emmyem8456
$10.56
88 votes
댓글 남기기 19
Authors get paid when people like you upvote their post.If you enjoyed what you read here, create your account today and start earning FREE STEEM!
STEEMKR.COM IS SPONSORED BY

Good to see you back on here. House looks nice. I'm actually in the process of putting a paver walkway around my house and doing some other landscaping

Awesome, yeah I don’t know what I’m doing! I went to a couple garden centers and wandered around clueless. 😂

Checkout Teds in the south suburbs. I think I'm gonna be heading out there tomorrow, that's my favorite place

Ill have to check it out! I went to lurveys (really really expensive) and I think its called pesches which is in Des Plaines (I live near Ohare) I just discovered this app called iscape where you can take a picture of your house and then add in plants to see how it looks. Im going to play with it today!

Well I'll have to change my gardening plans up. Had an arboritst/tree cutter come out Friday. Earlier this year had a couple huge like 70 year old trees taken out of my front yard by the city because of that asian beatle. had this guy out on friday and apparently two more trees in the back have to come down and those are the trees i hang my sunsail and my lights on so gonna have to change things up. i know you sepnd a lot of time on your outdoor area, if you have a patio area in the back costco has these awesome sunsails for like $20 bucks that look pretty cool and are great for getting out of the sun on a hot day. 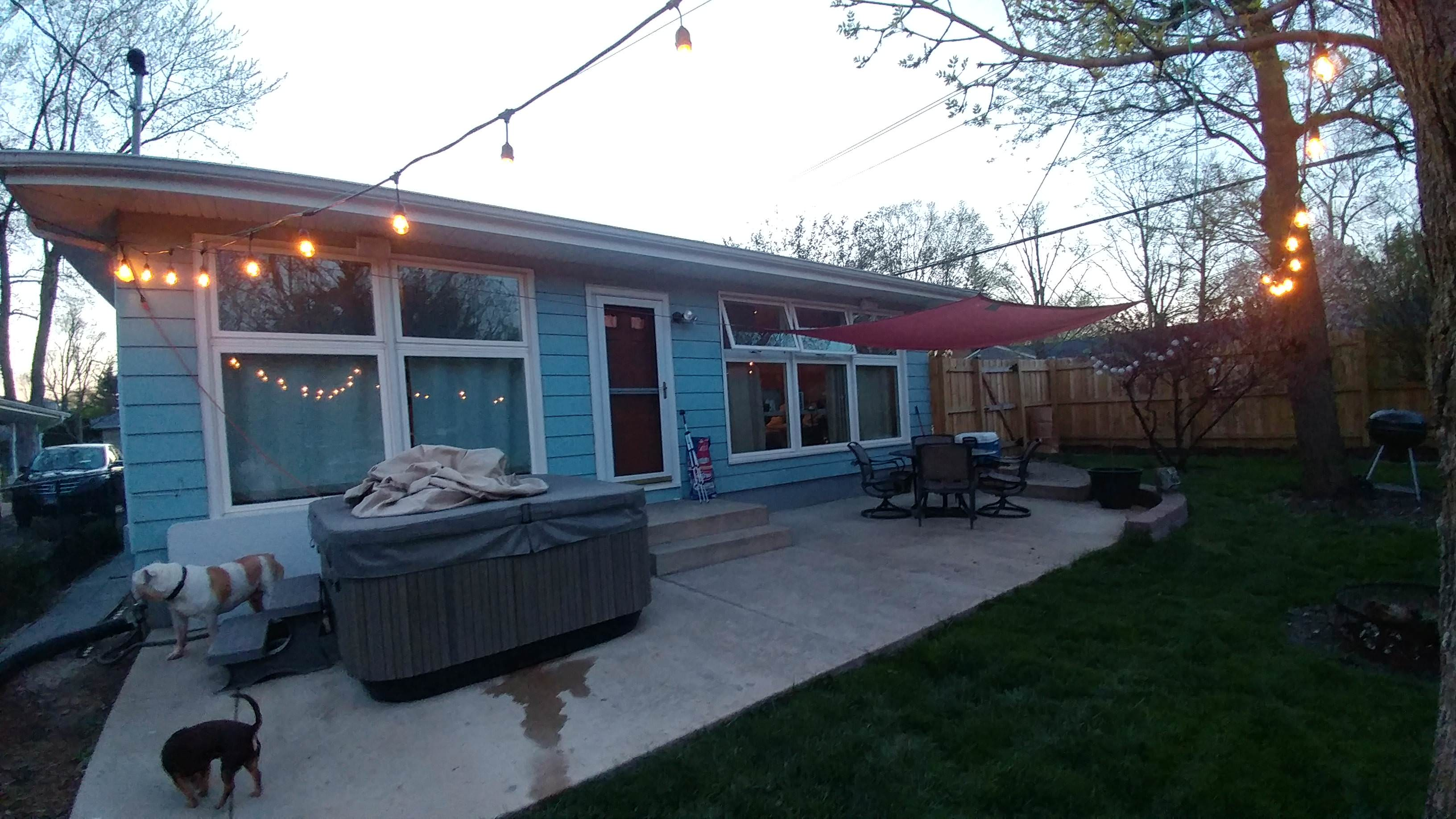 Wow doesn’t it cost thousands of dollars to remove large trees? That’s horrible! Thanks for the sun sail idea, I’m defintely going to get one for my back porch!

Oooh I love the shutters! Also while bushes are great, and greenery is awesome, its probably best to pull out a push like that next to your outside because the roots can do incremental damage to the foundation and as well, the bush can be home to many vermen that you want to avoid.

Very pretty, good updating. Thanks for sharing. I always look forward to your content.

Ugh, you are right....I forgot about roots causing foundation problems. I went to the garden center and wandered around on Saturday and I felt more confused than before! Looks like I have more research to do... :)

you did great on the house so be proud of that. I'm considering growing some strawberries but I have to check to see if killing them is a crime lol. I don't want end up in jail.

Strawberries are cool because they are perennials, and the best year for strawberries in the 2nd year after they are planted. I say go for it :)

Your house looks nice. I think your firm determination will make you successful and we will see a charming look in front of your house.

Thank you my friend for sharing this. Looking forward to reading your next post :)

Don't give up! It did look really pretty for a while there! The one thing that has worked out a lot better for me is not buying from places like Home Depot and Lowe's. Unfortunately, I had a lot of plant death, languishing, etc. I try to go to spring garden sales run by garden clubs and nature centers and things like that - the volunteers always know so much about native plants and that kind of thing...I am partial to perennials because they come back and create less work and expense to some extent. But anyway...gardening is great, but can be discouraging too and there is a lot to consider. I'm constantly googling about it because I hardly even know the name of many of the plants I have! oh well...can't be good at everything ;-)

Yeah, I went back to the garden center today and I still couldn’t commit to buying anything 😑 arghhh

I really like all your updates, especially the black shutters!

If anyone can do that well, it would be you! :D Your 40 hours a week on Steemit was really inspiring to me. And though I can't put in a garden right now, I'm looking forward to reading about what you've learned!

Thanks! I have to get back into it, I have been severely lacking on Steemit this past month!

I’ve missed seeing your posts, but real life is important! And knowing how much you devote yourself to new projects, I’m sure it’s tough to keep up with all of them!

In spite of the fail with the planting, you really made your house much more beautiful. Good luck with the next attempt 😜