WHAT DID JESUS DO FOR US ON THE CROSS? 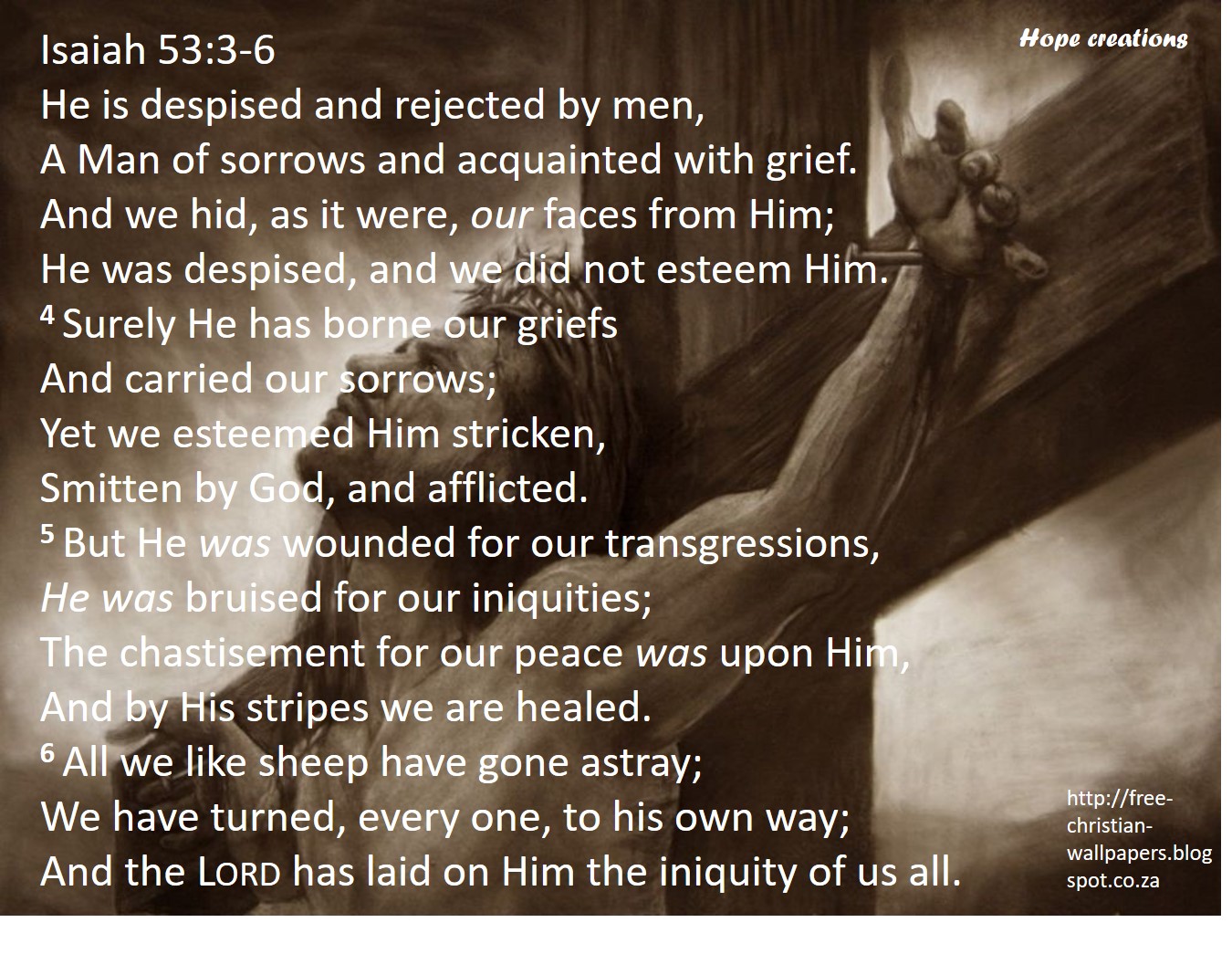 Christ's death by crucifixion was as real as scripture testifies. Read Luke 23:26-56

On the cross, Jesus Christ bore our sins in His body, paid our penalty, and became sin in our place that we might be redeemed, forgiven and brought back into the right relationship to God.

1 Peter 1:17-21 And if you call on the Father, who without partiality judges according to each one’s work, conduct yourselves throughout the time of your stay here in fear; 18 knowing that you were not redeemed with corruptible things, like silver or gold, from your aimless conduct received by tradition from your fathers, 19 but with the precious blood of Christ, as of a lamb without blemish and without spot. 20 He indeed was foreordained before the foundation of the world, but was manifest in these last times for you 21 who through Him believe in God, who raised Him from the dead and gave Him glory, so that your faith and hope are in God.

1 Peter 2:24-25 who Himself bore our sins in His own body on the tree, that we, having died to sins, might live for righteousness—by whose stripes you were healed. 25 For you were like sheep going astray, but have now returned to the Shepherd and Overseer[i] of your souls.

2 Corinthians 5:20b-21 we implore you on Christ’s behalf, be reconciled to God. 21 For He made Him who knew no sin to be sin for us, that we might become the righteousness of God in Him.

Romans 5:6-11 6 For when we were still without strength, in due time Christ died for the ungodly. 7 For scarcely for a righteous man will one die; yet perhaps for a good man someone would even dare to die. 8 But God demonstrates His own love toward us, in that while we were still sinners, Christ died for us. 9 Much more then, having now been justified by His blood, we shall be saved from wrath through Him. 10 For if when we were enemies we were reconciled to God through the death of His Son, much more, having been reconciled, we shall be saved by His life. 11 And not only that, but we also rejoice in God through our Lord Jesus Christ, through whom we have now received the reconciliation.

Hebrews 7:27 who does not need daily, as those high priests, to offer up sacrifices, first for His own sins and then for the people’s, for this He did once for all when He offered up Himself. 28 For the law appoints as high priests men who have weakness, but the word of the oath, which came after the law, appoints the Son who has been perfected forever.

1 John 2:2 And He Himself is the propitiation for our sins, and not for ours only but also for the whole world.

The significance of the death of Jesus Christ on the cross can be stated briefly as follows:

John 17:4 I have glorified You on the earth. I have finished the work which You have given Me to do. 5 And now, O Father, glorify Me together with Yourself, with the glory which I had with You before the world was.

Hebrews 9:13-14 For if the blood of bulls and goats and the ashes of a heifer, sprinkling the unclean, sanctifies for the purifying of the flesh, 14 how much more shall the blood of Christ, who through the eternal Spirit offered Himself without spot to God, cleanse your conscience from dead works to serve the living God?

Colossians 2:13-15 And you, being dead in your trespasses and the uncircumcision of your flesh, He has made alive together with Him, having forgiven you all trespasses, 14 having wiped out the handwriting of requirements that was against us, which was contrary to us. And He has taken it out of the way, having nailed it to the cross. 15 Having disarmed principalities and powers, He made a public spectacle of them, triumphing over them in it.

John 3:16 For God so loved the world that He gave His only begotten Son, that whoever believes in Him should not perish but have everlasting life.

1 John 4:9-10 In this the love of God was manifested toward us, that God has sent His only begotten Son into the world, that we might live through Him. 10 In this is love, not that we loved God, but that He loved us and sent His Son to be the propitiation for our sins.

Romans 5:8 But God demonstrates His own love toward us, in that while we were still sinners, Christ died for us.

* Christ secured the means of salvation for all.

John 1:12 But as many as received Him, to them He gave the right to become children of God, to those who believe in His name:

John 3:14-16 And as Moses lifted up the serpent in the wilderness, even so must the Son of Man be lifted up, 15 that whoever believes in Him should not perish but[b] have eternal life.

John 3:36 He who believes in the Son has everlasting life; and he who does not believe the Son shall not see life, but the wrath of God abides on him.”

John 6:40 And this is the will of Him who sent Me, that everyone who sees the Son and believes in Him may have everlasting life; and I will raise him up at the last day.”

Romans 4:22-25 22 And therefore “it was accounted to him for righteousness.”
23 Now it was not written for his sake alone that it was imputed to him, 24 but also for us. It shall be imputed to us who believe in Him who raised up Jesus our Lord from the dead, 25 who was delivered up because of our offences, and was raised because of our justification.

* Jesus' work was a complete and perfect work!

1 Corinthians 1:30-31
30 But of Him you are in Christ Jesus, who became for us wisdom from God—and righteousness and sanctification and redemption— 31 that, as it is written, “He who glories, let him glory in the Lord.”

ALL PRAISE, HONOUR AND GLORY TO GOD! HALLELUJAH!

Thank you for reading, if Jesus Christ is not yet alive in you, my sincere pray is that the Holy Spirit will speak to you, through this study! christian-trail forgodsglory flaminghelpers steemchurch godwaves
2년 전 by forgodsglory54
$1.23
42 votes
댓글 남기기 6
Authors get paid when people like you upvote their post.If you enjoyed what you read here, create your account today and start earning FREE STEEM!
STEEMKR.COM IS SPONSORED BY

Your post does a marvelous job by encapsulating the doctrine of the Messiah's substitutionary atoning sacrifice and it is very apropos for this season of the celebration of His victorious resurrection.

I have posted a teaching entitled, NOAH’S ARK AND THE RESURRECTION OF CHRIST. I am sure that you will find it revelatory and insightful. I would be very grateful if you took a few minutes to read it over.

Awesome God, Awesome Savior, Awesome sacrifice! The Word “Awesome” I reserve for our God. You can’t have an awesome pair of shoes, car or even an awesome wife. But our God also is Awesome. He took the wrath of God that we deserved. He fully paid the price by the time He said, “It is finished”. All of the handwriting and ordinances that we written against us nailed also to the cross with Him. He bore the curse, so that the blessings of Abraham coukd fall upon the gentiles. He grafted us into the cultivated olive tree, making the two into one.
He made us sons and daughters. We now have access! Awesome! He made us His Righteousness and commissioned us as His ambassadors. Awesome!

Thanks be unto his the Father for giving us His son as a propitiation for our sins. It pleases the lord to crush His Only son to pay the penalty for us and by so doing, abridge the gulf that was between God and man. Abraham's feeble hands couldn't sacrifice a sinful Isaac, but the Father's strong hand was able to sacrifice the perfect Savior Jesus on the cross. Great post @forgodsglory. God bless you for sharing.

Thanks@forgodsglory what Jesus did no one can do it we humans keep saying I got ashamed because some one did some thing minute but Jesus was stripped naked but he still did it for us ..What a great love no one in the world can explain it other than the spirit of God

my sincere pray is that the holy spirit will speak to you, through this study!

what Jesus did on the cross was to restore our lost relationship with the father. thank you for the reminder @forgodsglory.

Hello @forgodsglory, I am starting studies of the bible, and I think your publications are very educational, I hope to learn more about these wonderful studies. I will follow you, thanks for sharing