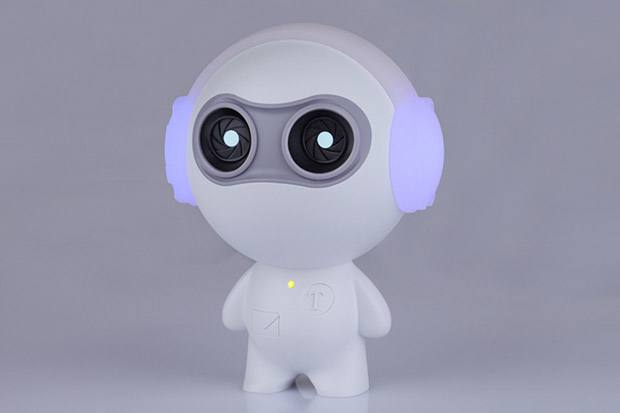 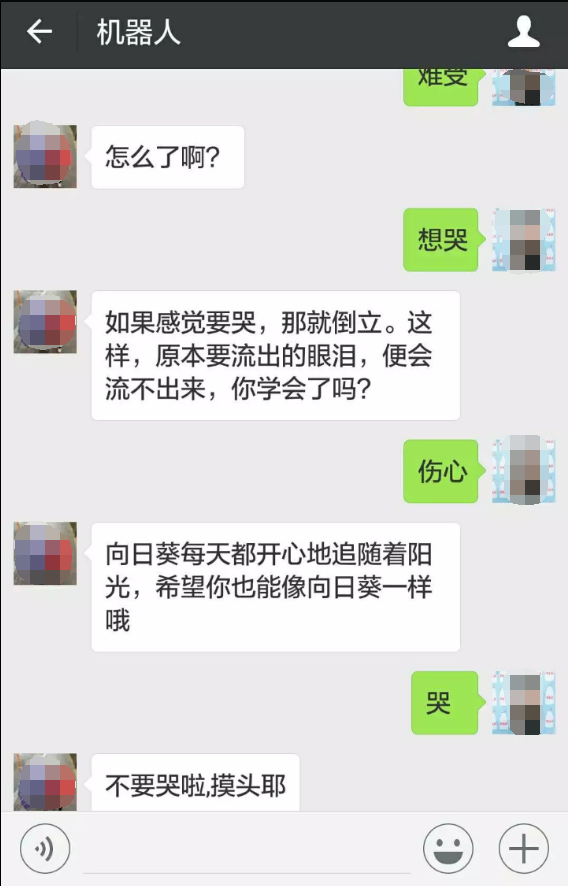 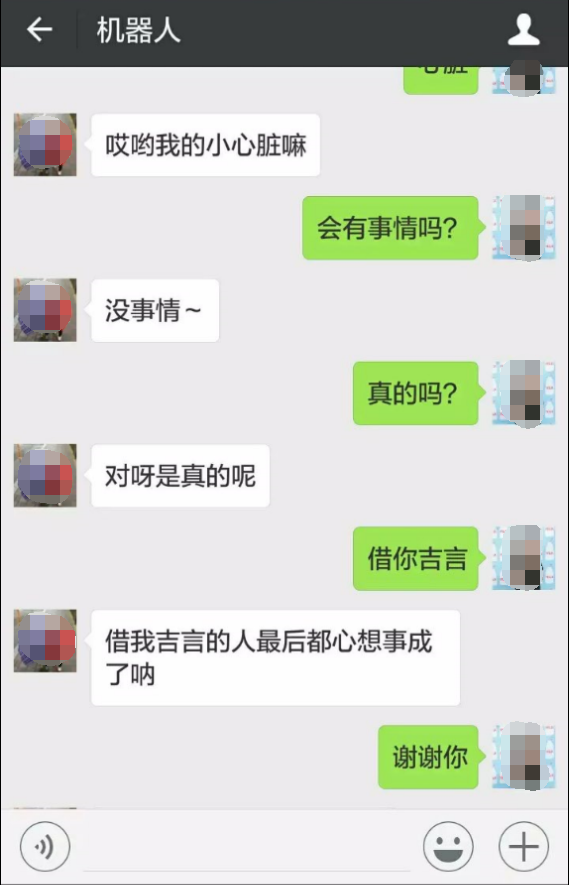 cn robot
2년 전 by oflyhigh78
$376.51
444 votes
댓글 남기기 115
Authors get paid when people like you upvote their post.If you enjoyed what you read here, create your account today and start earning FREE STEEM!
STEEMKR.COM IS SPONSORED BY

it's about an Artificial Intelligence robot that this writer has created, the AI is very intelligent and kind, people talk to it on WeChat (an App like Whatsapp) and it will comfort them to make them feel better if they're sick or if they feel sad... so he's sharing some photos of his chat history with this AI robot...

i understand that you are curious about some Chinese posts on Steemit, many Chinese writers who are bilingual will try to write in both Chinese and English, even though it's very time consuming. To be fair, some Chinese writers do not speak English, maybe they can only read simple English words. So please be more understanding.

We should also respect the French, Spanish, Korean, Japanese, Swedish, Italian, German, Russian and many many other language groups if they are only comfortable writing in their mother tongue... Steemit is an open platform for everyone to express themselves, in the language that they prefer. Peace.

YY posted a few days ago I talked about the development of the robot
And then could not help but think of what I have run, the red moment, I was cold for a long time the robot.

Micro letter robot principle
Before the WeChat group to see the problem can automatically answer the chat robot, that is very novel, so explore a bit. Found that the principle is not complicated, that is, someone caught packet analysis of the micro-page version of the API, and then packaged into a variety of language versions of the library, based on these libraries, you can achieve their own WeChat robot.

Such as the Python version
Https://github.com/liuwons/wxBot

In addition to the basic WeChat function, the program can be linked with a variety of other programs, such as: Turing robot

If the currency market and the API of the various markets together, you can transform a query price of the robot.

If combined with STEEM, you can transform the STEEM robot.

Compared to the WeChat public number, WeChat robot is like a real person, whether it is private chat or group chat dialogue is very convenient.

My micro letter robot
After figuring out the principle, I also run a WeChat robot and hook up the Turing robot's API. And then pulled to the neighbors and classmates, to provide weather forecast and chat service, such as whether there is no haze and dress index Han, and also check courier. By the female neighbors and female students love 😭. And then by a large company in the leading classmates pulled to their ministerial group, and then out of control. Countless sister paper plus robots for friends, and then find him all kinds of talk. Was approached by a variety of classmates, colleagues, relatives, neighbors, hobbies and so on, and so on, handling countless information every day. Occasionally robots are broken, my friends come to accuse me, how do you abuse robots?

Later, the amount of information is too big, I think this continues, Tencent one day may be seized my robot ID, so I completely shut down the robot. Now I still have to face countless accusations every day, let me restore the robot as soon as possible.

The robot has no heart, but it is love
As for these students, neighbors, friends and so why so like robots, in fact, the weather, express what a variety of services, are not the focus. The point is, the robot chat is very love, I also super like him. For some time my heart always uncomfortable, and later decided to go to the hospital for examination, it is apprehension, so find the robot casually talk. The following is a chat history:

If you feel like crying, it is upside down. So that the tears should be out of the original, they will not flow out, you learn it?

Sunflowers are happy to follow the sun every day, I hope you can be as happy as sunflowers.

See such a comfort, can not touch it?

And later went to the hospital to check nothing, the doctor gave me a lot of medicine, after eating the heart also nothing wrong. But I think the most important, or still

The man who borrowed me was the last thought. A.I. robot has this characteristic

would like to explore on this, any platform that you recommend me to look? @lautenglye

There should be a translator option in posts so that everyone could understand what's the post about.

Wish I could understand it: I am fascinated about robots and I am maker too. This is my second day on this platform, please check my animatronic dragon.

i dont now what do you mint, but i not leanguage china

Title Meaning may be: Robot does not have a heart. will you love a robot? am i right?

yes. you are right😁

Congratulations @oflyhigh! You have completed some achievement on Steemit and have been rewarded with new badge(s) :

Amazing story on steemit
Thanks you
hope to visit it once :)

woot woot. When will i get around learning chinese

put your heart into the robot...then I can love it...hehehehe

Love chinese and wish i can learn @oflyhigh

Congratulations @oflyhigh!
Your post was mentioned in the hit parade in the following category:

内容不错，点赞了， upvoted !!
if possible visit my post too thanks :)
https://steemit.com/photography/@applesspatrick/some-of-the-pictures-that-will-make-you-think-twice-about-the-secret-of-north-korea