Attaining the Path to hilarity or a toothless cousin / @originalworks

This happened when I was still a toddler. I heard about this story in my late teens and it cheered me up because just imagining the scenario made me laugh. Picture this.
My cousin and her sister were five and seven years old. Leah and Sasha (These aren't their real names. Why do you want to know their real names you creep?)
So anyways, My aunt had pre-paid for a large Persian rug and went to pick it up with my uncle. Lea and Sasha were in the back of the car pressing their noses against the window and fogging up the glass.
They reached the shop and the aunt asked the kids to go in and ask the dealer to bring the carpet out. The kids ran in; the dealer was on the phone. Both decided to wait in the shop while the parents waited outside.
Soon, the two decided to play tag. They ran around the room while the dealer obviously engrossed in an amorous conversation reclined behind the desk and laughed on the phone with his feet up. 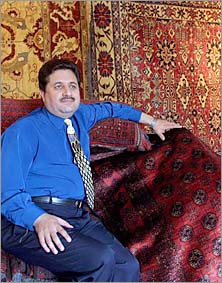 Apparently, he took no notice of the two midgets raising hell in his shop.
I don't know what the parents were doing in the car either. No they were NOT making love, calm down. Calm those 'bitch on heat' hormones.
Lea was running after Sasha and for some genius reason decided to shove her; the carpet gave way beneath their feet and Sasha was flung forward face first into the edge of a decorative table.
Her head knocked the wood as if a water melon splatting on the side walk.
A shower of blood sprayed Leah and Sasha's front teeth were knocked out as she sat dazed on the floor. Instead on doing the normal thing, my abnormal ass cousin starting running in circles screaming her head off.
Everything looked like a crime scene, my running cousin managed to drag bloody hand prints across the wall, those prints stayed on the wall till a week.
I can bet the shop closed down after such favorable press.
So, the parents thought the kids inside were getting raped. They ran inside with my aunt on Rambo mode. Son of a bitch was gonna die. No one abused her kids, except her.
When they went inside they quickly realized the deal.
The dealer in an obvious state of panic was collecting the cousins teeth from the floor whilst shouting: "My carpet! My carpet! You little bastards!"

My Uncle tried to get a hold of my cousin but she was too fast. Not to be outdone he took a slipper in hand and raced after the child screaming :" Son of a bitch, dog. Come here! come here ill kill you!" The running cousin screamed louder knocking things off tables and the phone off its rocker to gain speed.
Or what the fuck ever, she was trying to do.

During this whole time my aunt, who is a Dr. cradled the toothless child in her arms wailing :" Who will marry my girl now, she is ugly! UGLYYY!" At the end of the day the family walked away with a free carpet.
Hows that for a show, bitches?

comedyopenmic life funny
3년 전 by atomickacha32
$2.30
6 votes
댓글 남기기 9
Authors get paid when people like you upvote their post.If you enjoyed what you read here, create your account today and start earning FREE STEEM!
STEEMKR.COM IS SPONSORED BY

A great story, well told. Thanks for your entry. Look forward to your entry in next weeks contest also.

WTF did i just read xD Same thing happened to me, i was playing with a friend, i shoved him he went to the ground and broke his teeth, there was blood everywhere!!
He had a teeth job and his new teeth look awesome, thank god this was back in fourth grade so i didn't have to pay for anything, the school is the one paying for it.

HAHHAAH NO WAY. Schools here just expel for that kind of thing

It was a Catholic school and they would be expelling 2 great students xD and even if they expelled us, they would have to pay in the end because it was inside school grounds

Not bad @atomickacha - what chaos!

Thank you boss, as usual your commenting here is appreciated