I've done a bunch of stuff for Mad magazine believe it or not. Going in I knew they were going to want toned down material, so I have no real qualms about any restrictions or stuff they were leery about running. They actually let me get away with way more than I thought they would ( for awhile). 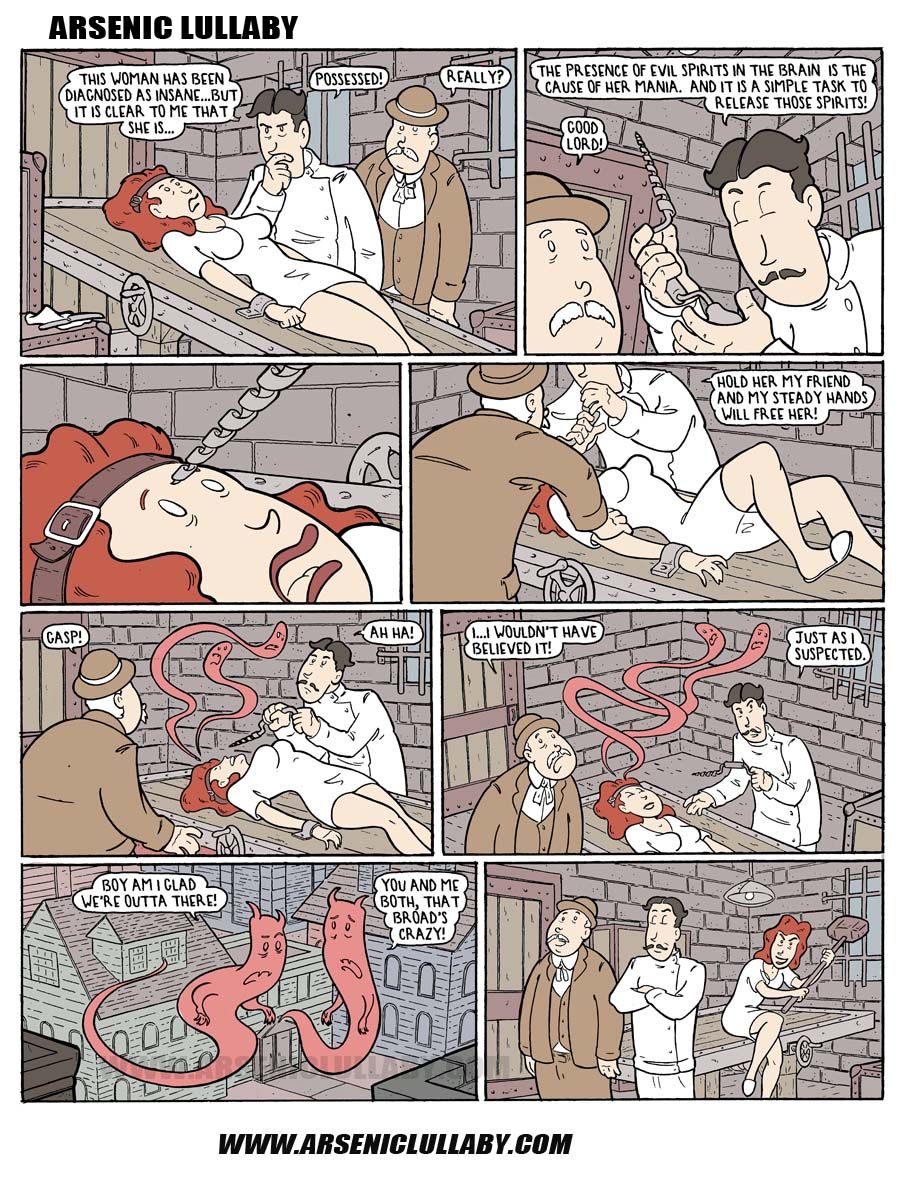 This one here (below) was more toned down originally but to my shock the editor asked if I could add more gore. To which I replied "that's not a problem, don't every think it will be. More gore coming right up." 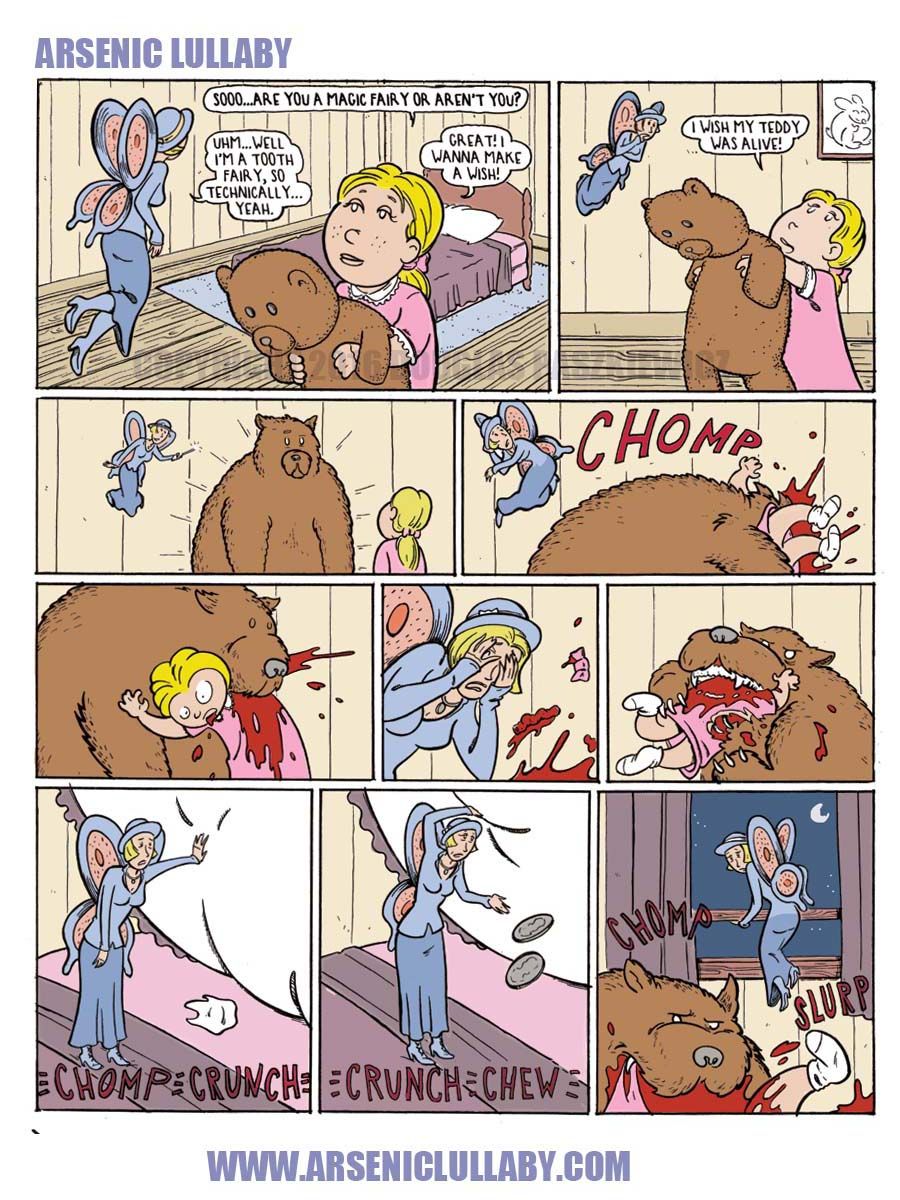 So, my work there was allowed to be fairly dark by normal standards. But still a few levels below the dark that I'm known for. Still just getting the hang of Steemit, figuring out how often I wanna post, what kind of stuff to post and whatnot. It's pretty easy to use as far as being able to handle video or pics. So I'll probably just post every kind of thing. Comics, cartoons, how to, progress shots, progress videos. I suppose I should throw in a Steemit exclusive here and there. (shrug) I'll figure it out.

comics horror comicbooks funny
3년 전 by arseniclullaby65
$5.44
38 votes
댓글 남기기 24
Authors get paid when people like you upvote their post.If you enjoyed what you read here, create your account today and start earning FREE STEEM!
STEEMKR.COM IS SPONSORED BY

Hahaha! thanks! I love that one, but I don't think I even bothered sending that their way...they might have just cut ties with me on principle.

I love 'em, keep them coming!

Your mind must be a strange place, but I still laughed. Thanks for sharing these with us.

It is strange, I do my best to make use of it. Sometimes are more successful than others.

the editor asked if I could add more gore

yeah, that's really the only request you ever want from an editor

I believe in the boogeyman. :D

Sadly the boogie man did not hear your testament before ending it all. ;)

I’ve been plugging away here for almost two years and still haven’t figured out how I want to use Steemit, so you’re in good company!

The Boogie Man was incredibly compelling to me. What a great take on the idea of imaginary friends fading away. Instead an imaginary enemy goes out with a bang! I’m ready for an Arsenic Lullaby produced reboot of Monster’s Inc.

Any plans for future trade paperback printings or a great omnibus!?! Was browsing your shop and want to get my hands on a complete library of your stuff!

For awhile I had forgotten I even made a that boogie man one! Being able to look back on it from a distance, I really like it. I keep looking for an excuse to redraw it (since I've improved a bit since then).

I did a big omnibus a few years back "The Devil's decade". I don't have any copies left myself. I was a giant pain in the ass because it cost a ton to print, costs a ton to ship (and if you get a box damaged it's a way bigger problem than a box of smaller comics ) . The economics of is aren't as much in your favor as a 20.00 TPB. So not plans in the near future, but plans change. I have two smaller trades with a bunch of really good stuff in them, up at the site. One has the boggieman on the cover, the other has Voodoo Joe and his Zombie fetuses at a diner. I'll look again at the pic you posted of what you have and see if either would be worth it for you (you might have most of it/them). I'll look around later also and see if I have a single copy of anything else that isn't on the store.

I just started re-reading The Donut Cometh last night, it’s wonderful, but reading it on the heels of consuming some of your newer work it’s clear to see the elevation of your craft, both art & writing, over the years!

I saw mention of The Devil’s Decade and that’s the one I was curious about. I probably will pick up the smaller trades soon, and maybe seek out some older stuff on the “after market.”

Thanks, I like to think I'm getting better at both. Although there are some older stories that I look back on and think I may not ever top, writing wise. The Devil's Decade has a softcover and 2 different hardcovers..in case you look them up and get concerned you found the wrong thing or there are two different omnibuses. There's just one with alternative covers.

Hahahah! These are so good! So happy to add you to my list of Steemit comic authors =)

Thanks! I do my best. Happy to be on your list!

fantastic comics man! I loved them

Thank you! I'll be putting up more every week, so stop by again!

This is quality. Love the tooth fairy one, LOL.. the humanity!

Thank you! The tooth Fairy pops up from time to time in my comics...disaster and calamity often follow in her wake. ( are in her wake? her wake brings disaster?...how do you word that? hmmm...follow and in her wake are kinda redundant aren't they? well, you get the idea.)

haha, thanks! That last one still kinda cracks me up too.

ugh i love your humour so much XD

they are so dark and so wrong and they made me laugh so hard :D :D

That's great to hear, thanks! Tragically It's too late for me to change, so have no fear on that score. ;P

Congratulations! this post got an upvote by @steemrepo and was manually picked by the curator @veryspider to be added on STEEM REPOSITORY, simply comment "YES" and we upload it on STEEM REPO Website.
Want to know more about the Steem Repo project? Contact us on Discord