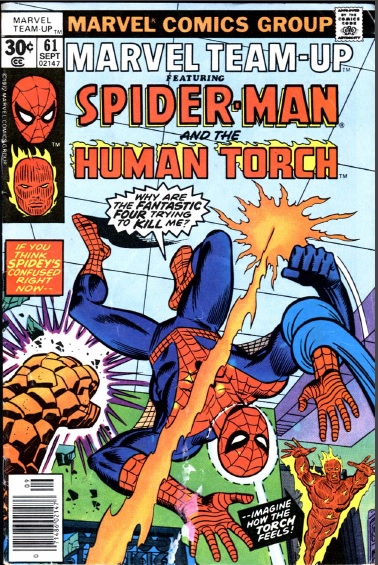 Poor Spider-Man must clean-up Reed Richard’s lab after destroying it in a fight alongside WAASP and Yellowjacket. Then suddenly he is attacked by the Invisible Woman, the Thing and Mr. Fantastic, but never by all of them at once. The Human Torch saves him, but Spider-Man attacks him, thinking that he too attacked him.

Then we switch to Carol Danvers. Danvers sees the battle and is dying to help, but she can’t shack-off the wing commander in order to change into Ms. Marvel. Also, this issue has a different artist than the usual Jim Mooney & Joe Sinnott. Here the artist is John Bryne and his style is so different. Danvers looks like a poster girl for the 70s, in fact, in these two panels she reminds me of Farrah Fawcett (without the famous red swimsuit of course). She is so much more stylish than we’ve seen her in her own issues.

Also, last time we saw Danvers she was at A.I.M’s New-York headquarters which was being attacked by MODOK. I’m guessing that despite the fact that this story is inside the 616 continuity, it’s not in order with Ms. Marvel’s continuity. Not that I care that much. This is a great chance to make Carol Danvers known to a larger audience of readers.

The issue ends with the Human Torch almost dying from a blow given by the Super-Skrull and Spider-Man having to face him head on after his trap failed. But don’t worry, Ms. Marvel will be there to help Spider-Man. Their first out of many famous collaborations.

Check out my website for more such posts, and more in depth analysis.

Please follow me and upvote my posts to help yourself stay up to date with everything that is nerdy and awesome.

Resteems will also be most appreciated.

comics marvelteam-up farrahfawcett caroldanvers spiderman
4년 전 by readingdanvers64
$2.98
16 votes
댓글 남기기 7
Authors get paid when people like you upvote their post.If you enjoyed what you read here, create your account today and start earning FREE STEEM!
STEEMKR.COM IS SPONSORED BY

Are you re-reading each Marvel Team up and opening it up for discussion? I love the classics. I couldn't get through to your website because I'm at work and it's blocked but I followed you on twitter.

Thank you! I am reviewing each appearance of Carol Danvers in Marvel comics. In this case it includes Marvel Team Up, but not Marvel Team Up specifically. Though it does look like fun. We can discuss anything regardless. That's always fun.

This post has received a 2.04 % upvote from @drotto thanks to: @readingdanvers.

I cannot even tell you how much I love this idea. It's like monks annotating the Buddha's teachings, but for nerds. Up-voted and followed.