This series is about the DC snipers of 2002. In this installment, we are going to begin discussing the 2013 film Blue Caprice, which was based on and repackaged the psyop. As you can see, they placed Malvo in several scenes in a “White Magic” shirt.

As we pointed out, there was a lot of “white magic” in the event. In previous installments we asked about red flags, solved the “like a duck in a noose” riddle that the snipers gave to the police, and showed how the spooks use “white magic”—astrology, in this case—to sign their events. The constellation Draco factors in heavily in our interpretations.

You can read the previous installments here: https://steemit.com/@hqz

The main purpose of the film Blue Caprice is to repackage the Snipers event from being a Muslim terrorist event to being a multiple/serial shooting based in a family drama. That is, at the time, the purpose of the psyop was to reinforce racial and religious differences in order to justify the establishment of the department of Homeland Security and to prepare the ground for the war in Iraq.

The film puts most of this to the side. The film portrays Muhammad’s motivation as rage over the fact that his wife took his kids and that he is unable to see them due to a restraining order. There is nothing about him being inspired by 9/11—and so on—which is part of the official story. The film ends with Malvo in prison saying to an investigator, “Where’s my father?” (referring to Muhammad). This line resonates with the motifs that the film has established in telling the story, in that its version revolves more around the family drama, of the abandoned Malvo who is in search of a father figure, and of Muhammad who has cultivated Malvo into a killer in order to take revenge against the society that took his children away.

That is, the film repurposes the psyop to match the storylines of the “golden age” of hoax mass shootings that began around 2012.

So, what we were concentrating on concerning the spooky levels of the event concerned the “duck in a noose” statement and the Draco constellation references. Draco is a constellation that means “Drake” in English. “Drake” is both a dragon and a male duck. The constellation is shaped like a noose (hence, “like a duck in a noose”). If you have not read the previous installments. I recommend that you do so, so that you follow what I am laying down here.

One thing that I didn’t mention in those installments is that previous ghostbusting has found that the Draco constellation is related to the Babylonian god Marduk on the lower frequencies in cases that have to do with Islamic terrorism. That is, they reference Marduk because Marduk was the central god of Babylon. Babylon is in modern day Iraq. Marduk’s iconography featured the dragon.

Marduk and His Dragon

So, they are playing a little game with these associations. “Draco” is “Drake” which means “dragon” but also “duck.” The dragon is associated with Marduk. There is also a pun with “duck” and Marduk.

I hope I am not losing anyone with this one, but I need to introduce Marduk into the mix so that you fully understand what the film is doing.

There is a short sequence in the film which does not seem to be all that motivated except to allow you the opportunity to get a better look at what is in the background. Muhammad puts his back to the side of the refrigerator for several moments and then walks around the front of it: There is the typical drawing of the “family,” but the image to the right is a little odd. It is a keyboard, the notes of the octave underneath, and a bear beside a duck with ducklings.

Before I explain this image, though, let me show you that there does seem to be something meant by it. The camera tracks Mohammad walking around the fridge and this image (which is in the background the whole scene). He ends up at an open door: 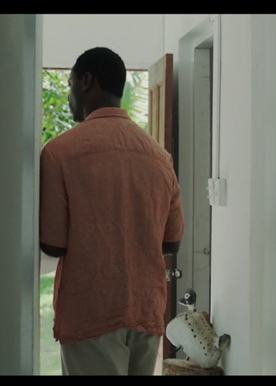 In front of an open door and beside a wooden duck.

We will see how the duck motif keeps getting inserted into the film at key moments. But let’s go back to the fridge image which also has ducks in it: So, look, there are things that the filmmakers “should” know and “shouldn’t” know, if everything is on the level. The filmmakers should know about the “duck in a noose” phrase that happened in the event—so the insertion of ducks here and elsewhere could just be “innocently” clever. So, too, the filmmakers could or should know about where the word “caprice” comes from. (The film is named Blue Caprice after all). “Caprice” is named after a musical term, hence the keyboard and octave on the fridge drawing.

So far, the innocent reading is simply that the film is crafted well. Well-made films often have this kind of attention to thematic detail.

However, placing the duck beside the bear is something that the filmmakers should not know about: 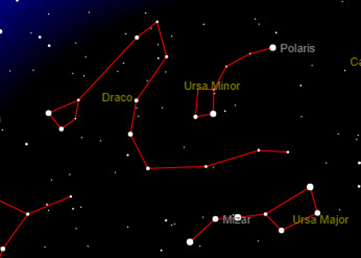 See, in the night sky the “Duck” (Drake, Draco, Marduk) is beside the “Bears” (Ursa Minor & Major) as illustrated in this graphic. The filmmaker’s should not know that, as we have pointed out, the astrology/astronomy is part of the spooky signature of the psyop.

And they continue with this theme.

This scene is immediately followed by a shot of a plane and an establishing shot of Washington state that we will return to. Shortly after arriving in Washington, Muhammad and Malvo hook up with Muhammad’s old friend—and the first thing they do is go blow off steam by shooting guns in the woods.

This is about 25 minutes into the film, and it is the first time that we see a gun in the hand of the future sniper. You’ll notice that Malvo is in a sweatshirt that reads “white magic” on the sleeve, the still that we opened with. The thing is that this is the clearest shot we get of the sleeve in the whole film, yet he is wearing this sweatshirt in separate sequences and later scenes.
“White Magic.” An innocent detail or a nod to the arcane?

Well, it almost certainly seems like the latter when we examine what also happens at this moment in the film. The friend the whole time is wearing a cap. We only get a somewhat clear look at the design once: On the left appears to be a duck. The right appears to be some kind of cap/goggles, like a birdwatching get up. And if you notice there is a duck-like bird straddled across the glasses/goggles. It is kind of hard to see but it is there.

The lower left is a bird in flight underneath lettering that I am unable to make out.

Ok—let’s keep this in mind and continue.

During the scene, we see Malvo shooting a handgun with “white magic” written on his arm. The friend wearing the bird-theme cap (perhaps ducks) takes out a rifle and starts practicing with it. He misses his target a few times and then says:
“Fuck a duck.” (This same character says this same line again much later in the film somewhat randomly.)
And actually what happens is that he misses (with Mohammad laughing jovially) and says: “Fuck a duck…maybe I should shoot at some birds. One might fly into a bullet accidentally” (etc)

He then gives Malvo a chance to shoot the rifle at the target, calling him a “natural,” etc. Malvo takes the rifle (which is the same or same kind of rifle used later in the sniper attacks). And this is his target: 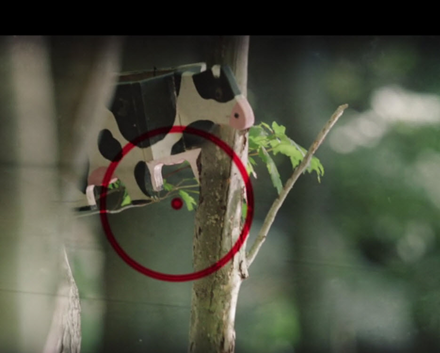 It is a wooden cow attached to a tree. This is extremely significant, in fact. It is something that the filmmakers should not know or should not be suggesting.

Let’s review:
In this sequence, we have the reference to “white magic” and “fuck a duck” and the bird/duck hat.
The friend “should be shooting at birds” (“fuck a duck”) and not a cow presumably.

Well, when it is Marduk:

See, Marduk—the “duck,” drake, dragon—etymologically means “solar calf.” His symbol is the dragon, but keep in mind that that is all the later development after he takes over the Sumerian/Akkadian pantheon when Babylon takes over the region. Originally, Marduk had very different associations—like the solar calf.

Anyway, here is a bunch of “random” details from a film that make sense from the standpoint of our alternative codex. It is like the filmmakers are reading from the same codebooks that I have stumbled upon.

Duck—calf—white magic. They play with the duck thing more shortly after in the film. Malvo is caught for shoplifting and Muhammad talks the guy out of turning Malvo in. To punish Malvo he ties Malvo up to a tree in the woods with a heavy rope.

He says that he is not mad, but that “This is bigger than I thought. I can’t tell you why, but I can lead you.”

While Malvo is tied to the tree, he cries out “Dad” several times. Then he looks up and there are several moments that the film follows a flock of ducks. Well, it could be geese, but frankly, those are closely related birds that are very hard to tell apart from a distance.
Malvo breaks free and the next scene holds upon a stationary shot inside the place they are staying. Malvo walks in from the background and takes a seat. The camera is holding on this shot the whole time:

Like Mohammad says, “This is bigger than I thought. I can’t tell you why, but I can lead you.” This is the filmmakers speaking at this moment.

I’m not going to go through the whole film on this theme, though there is a lot more of this shit going on. My ultimate point in showing you these things about the film is to show you how it reinforces what we have already discovered and because it sets up what I find to be a code that the film gives us on the lower frequencies. The code involves the film's handling of the license plates on the blue caprice. conspiracy blog politics film truth
4년 전 by hqz25
$0.00
댓글 남기기 0
Authors get paid when people like you upvote their post.If you enjoyed what you read here, create your account today and start earning FREE STEEM!
STEEMKR.COM IS SPONSORED BY