Another day another terror hoax, this time in Münster Germany.

This is the van of the supposed attacker. Licence Plate: 666!!!
And not only that, read what the street sign above the van says: Theater!
Theater is exactly what its was, It doesn't get more obvious than this. 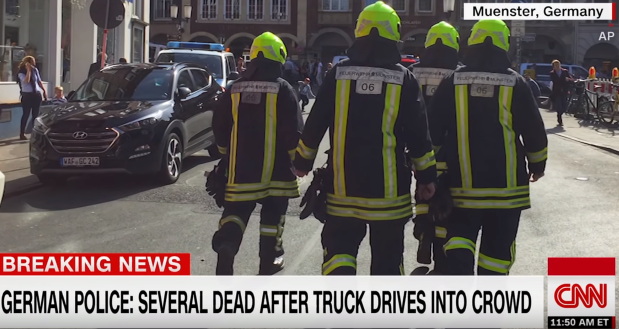 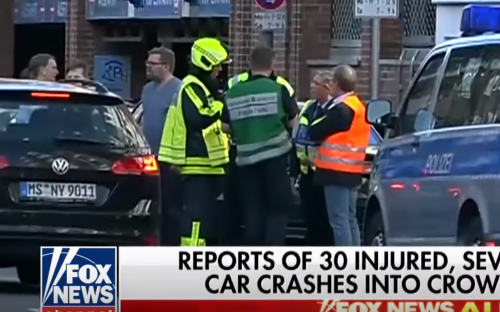 Revelation 9:11 King James Version (KJV)
11 And they had a king over them, which is the angel of the bottomless pit, whose name in the Hebrew tongue is Abaddon, but in the Greek tongue hath his name Apollyon.

Skull & Bones + "As Above So Below" triangles Order of St John "die johanniter" = Protestant branch of the Hospitaliers Order of Malta.
The maltese cross on the ambulance with licence plate 77 = Wizard of Oz

Look for the CNN and FOX reports (links in the replies), and you'll notice how much they focus on this ambulance.
The Order of Malta/St John is among the very top of the "Illuminati". They are one of the highest orders within Freemasonry, the Vatican and the Royal Houses. This police officer kept this handsign the whole time infront of the TV crews...maybe coincidence maybe not.

In 1698 Whitehall in London was engulfed in fire.
Whitehall (how the British Government is commonly called) is under fire today after the "russian spy poisoning" fiasco.
One can only hope the UK government falls....comon Illuminati do us a favour for once! 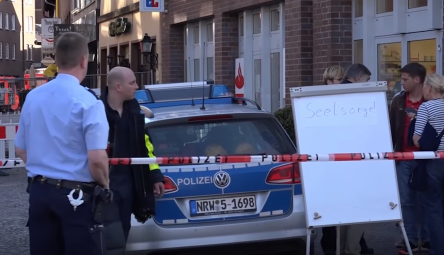 By the way Trump Tower was literally on fire today, though I'd say unrelated.

"3 people died and 20+ injured" supposedly, yet this german presstitute finds it all amusing. Obviously noone died, noone got hurt, just another drill!...but she will sure report that it was an absolute horror.

All these terror and trauma events have several aims: increase the police state, pass draconian legislation....but also damage the "spirit" of the population.
The gnostic johannite Hospitaliers (Order of St.John, Order of Malta etc)- who together with the Government I believe were behind this particular Hoax- know that with fear, hate and stress we can't reach our higher self.
The Christ within can only ascend under certain conditions. I will explain this in a future post.
One of the reporters mentioned "it was a blissful day in Munster till....." of course the Elites don't want the population to have too much of a blissful time, as it refills energy chakras and irrorates the pineal gland.
They don't want the wider population to feel empowered so they keep the masses in that lower belly area with fear and hate and manufactured traumas, and leave them just preoccupied with their daily hustle unable to see past their noses.

Very telling was the closing Image used by the Daily Mail when reporting on this event: 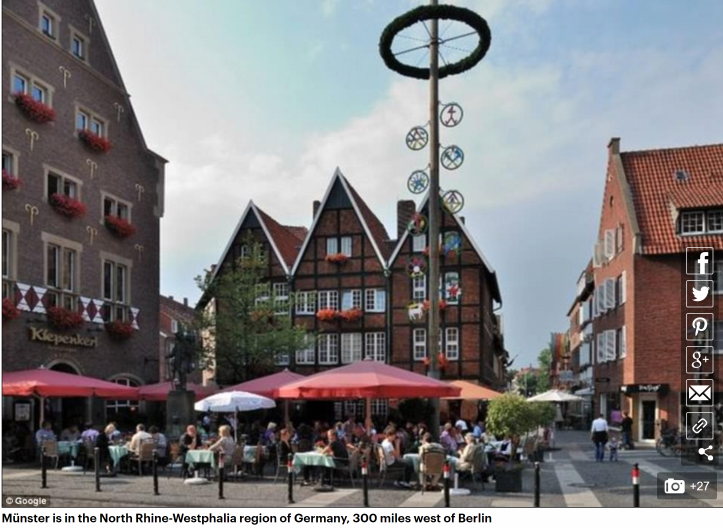 The pole (the spine), the chakras gifts to reach along the pole, and the halo (the higher self). With the people sitting at the bars much lower.
Also important to note that Münster is an historical centre for these christian gnostic traditions.
I will write a post on Gnostic Christianity soon.
I'm not a big believer in "spirituality", but Gnostic Christianity relates to physiology. It is (Occult) Science.

conspiracy spirituality muenster occult illuminati
4년 전 by lavater53
$3.32
15 votes
댓글 남기기 5
Authors get paid when people like you upvote their post.If you enjoyed what you read here, create your account today and start earning FREE STEEM!
STEEMKR.COM IS SPONSORED BY

links to the news stories

It's almost a shame that I find this equally fascinating as I do sad. But one thing is for sure it's 100% disturbing and needs to eradicated; So keep shining that light and hopefully the cockroaches flee!

Wow, nice work with the numbers in this article. Did you notice anything from gematria perspective with names in this event?

Thanks for your upvote. Followed.

Why do you say it's a hoax? It's ridiculous. We saw what they were doing in Gaza. There are terror attacks around the world everyday committed by Muslims.