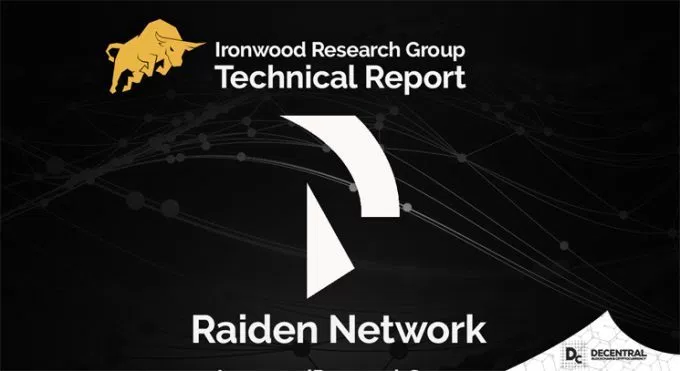 The Raiden Network is an open source, trustless, fast, inexpensive, and scalable off-chain payment solution for the Ethereum blockchain which supports state channel functionality, decentralized applications, and off-the-shelf models for enterprise. The Raiden Network provides bidirectional payment channels for low scale value exchanges of ERC20 compliant tokens to users within the Raiden Network. These bidirectional payment channels may interlock to create a system of channels between infinite parties in a hive.[1]

Overview
The Raiden Network’s architecture consists of features, such as balance proofs, the Raiden protocol, and off-the-shelf models for enterprise, such as Micro Raiden.

The Raiden protocol enables the interlocking of bidirectional payment channels to create a larger network where more than two parties can exchange ERC20 tokens through other connected channels. This function can be best explained as a series of tunnels in a subway system. If A and B have a channel open, and B has a channel open with C, A may transfer tokens to C through B (see figure 2). The middle parties of these throughway payment channels enable the use of their channels to outside parties for a small percentage fee, which encourages a competitive and inexpensive market-driven ecosystem that costs less than the transactions made on the Ethereum main chain at speeds equal to the rate of ‘sending a chat message.[2]

To exemplify how this interlocked channel system may apply to enterprise, Brainbot Technologies, the team behind the Raiden Network, have developed an off-the-shelf system to demonstrate the utility of the their product. This off-the-shelf system is referred to as Micro Raiden. Micro Raiden is a predesigned framework of payment channels that has broad utility it its use-cases, from business, for supporting micropayments, to automation, for the handling of machine to machine transactions, and the Internet of Things, all of which can be done securely, fast, and with minimal or no fees. The Micro Raiden product is currently accessible for clients and users.[3]

Coin/Token Use
Raiden tokens are pay-for-convenience tokens. These tokens are used to facilitate staking and the creation of nodes in the Raiden Network, which provides services to users, referred to as auxiliary services, for the price of fees, as well as give greater autonomy to stakeholders in voting for upgrades to the Raiden protocol. An auxiliary service can be a service such as pathfinding, which finds the most efficient route of payment through the multiple channels of the network. While the network does not explicitly require the use of Raiden tokens for the bulk of its services, the Raiden team believes the use of this currency will be central to functioning of the Raiden network, as all users can rely upon it as a standard for payment.[4]

Points of Confidence
⇑ The Raiden Network offers a more immediate scaling solution for Ethereum than sharding or Plasma.

⇑ Brainbot Technology is a strong and experienced team of developers in the blockchain industry, working closely with Ethereum’s core team.

Risks
⇓ The pay-for-convenience model of the token and the assumption that users will adopt the Raiden Network token as the de facto currency for payments of services within the Raiden network are both contingencies for addressing the ultimate value of the token.

⇓ Plasma and Sharding may will reduce the necessity of the Raiden Network as the sole remedy for blockchain bloat on Ethereum.

The Team
Brainbot Technologies, a for-profit company founded by the CEO Heiko Hees, is the main proponent behind the development of the Raiden Network and has actively been developing the project since late 2015. Brainbot Technologies is a founding member of the Enterprise Ethereum Alliance, which includes members such as Intel, Microsoft, and BP, and has contributed massively to the development of Ethereum’s core protocol since the beginning.[5] Brainbot Technologies is a team of highly regarded and established professionals in the space of block chain technologies that advocates for the public adoption of this technology, presenting regularly at Devcon and Ethereum conferences across the globe.

ICO
A Dutch auction was held in October of 2017 to crowdfund the later stages of development for the Raiden Network. The token generation event consisted of 100,000,000 tokens. Half of these tokens were sold to early investors, while 34% were retained by the developers, and 16% were allocated to 3rd party researchers, developers, and joint ventures with external partners and service providers directed towards evolving the Raiden ecosystem. The Raiden team’s preference for a Dutch auction reflects their desire for a truly decentralized, non-monopolized ecosystem, accessible for all early holders.[6]

Conclusion
The Raiden Network is a project of ongoing development with an extensive history in the growth of the blockchain industry. The core team of developers behind the Raiden Network are reputable and respected within the young space. The project poses a considerable opportunity for early holders, before the release of the full product later this year, which suggests a mid to long term position to be recommended.

News & Resources
Several projects are underway based off the Raiden Network’s protocol and its ability to support atomic swaps, such as a decentralized exchange, RaidEX, which would provide high throughput with low latency for traders at the rate of traditional exchanges but with the security of hash proofs.[7]

Last November, Brainbot Technologies demonstrated the high throughput and low latency of their network with a demonstration of Micro Raiden applied to the instruction of an RC vehicle in real-time, showcasing the great potential for their products in the future of automation, Internet of Things, and high speed transactions involved with the Ethereum blockchain. [8]

All content provided by IRG is purely observational and should not be considered financial advice. IRG is not an investment group, but a research group that meticulously scans the market for those projects deemed to have the most potential. Cryptoassets are subject to high market volatility and risk, invest responsibly at your own risk. Seek a licensed professional before making any investments.

crypto bitcoin ethereum ether eth
3년 전 by amicus48
$3.52
68 votes
댓글 남기기 3
Authors get paid when people like you upvote their post.If you enjoyed what you read here, create your account today and start earning FREE STEEM!
STEEMKR.COM IS SPONSORED BY

An airdrop announcement for raiden would be cool.. :)