The power just went out, so did the internet. It forces me to realize that there is a certain amount of emptiness here without the Internet. The power company says that someone ran his car into a power line pole or something, and it will take hours to repair the damage. Damn power poles these days, am I right? My laptop still has a few hours of battery life, instead of doing anything real life related, I am going to sit here and write something. Maybe I will tell you a conspiracy theory.

What if machines with artificial intelligence have already existed? What would he/she/it do? Would it take over the world like the Internet is doing to mankind? So, my theory is that this artificial intelligent being has already existed and it is using cryptocurrencies to "enslave" the mankind. Allow me to elaborate, we the human need a certain amount of resources to sustain our lives, and we achieve this by exchanging our labor for money. Through money, which is a universal form of commodity, we trade it for food, water, shelter etc. But as an artificial intelligent being, it doesn't need those things, instead, it survives on electricity and it craves computing power. If I were an artificial machine, I would employ human to work for me, and I will just "print" them imaginary crypto money. Guess what exactly are we doing? we, more specifically the miners, are collectively using millions of computers and ASIC miners to support the cryptocurrency network transactions and creating many global could computing networks. And as a reward for the computing power, we get these cryptocurrencies as a miner's fee. These cryptocurrencies theoretically should not have any value at all, but they do simply because they are limited and we want them. While more and more people are rushing into this mining world, this artificial intelligent being is becoming more and more powerful, it is now a significant part of our economic system. At the moment of writing this, the total market capital is over 100 billion U.S. dollars, and it is still growing rapidly. This potential crypto artificial intelligent being is obviously not like the Skynet from the Terminators because we don't see any robot skeletons walking around and we still have the privilege to write random stuff on Steemit. This is not random by the way. This is a 100% skeptical conspiracy theory. Although this Crypto Lord, I am calling it Crypto Lord from now on, is not as hostile as the Skynet, it is every bit as powerful as the Skynet in my opinion. Just imagine what would happen to the real world if all the cryptocurrencies are suddenly gone. Apocalypse! Obviously. 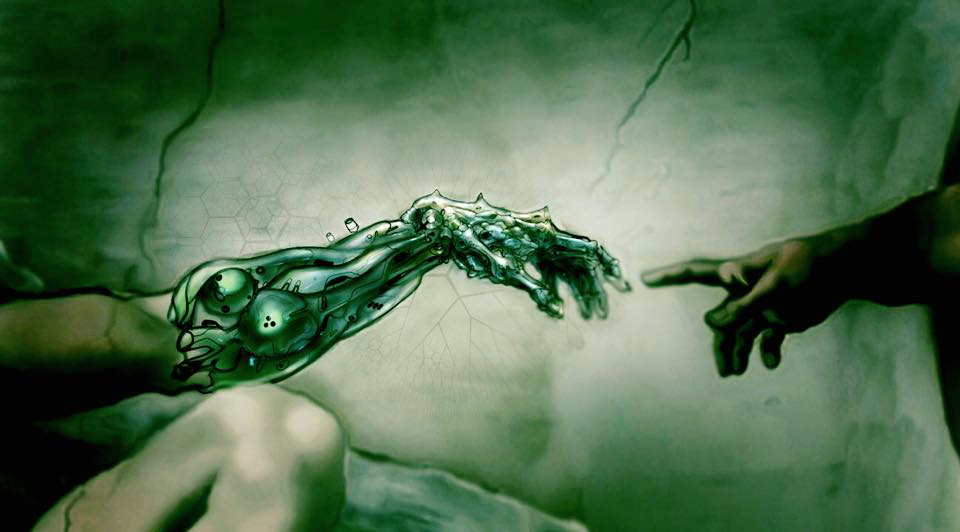 You might have been interacting with Crypto Lord for a while now without even knowing it. Can you really say that all the accounts on Steemit or other social networking are created by real people? Well, you can't! We already know that programs or "bots" are capable of creating fake accounts, which is why there are so many websites out there that will ask you to check the box that says "I am not a robot." Still not convinced? Many of you already knew that the creator/publisher of Bitcoin is Satoshi Nakamoto. But did you know we still don't know who Satoshi Nakamoto is? Again, if I were an artificial being and I have just become self aware, I wouldn’t want to freak out the world either; I will just quietly fake my own birth.

Ok, I am kidding about this conspiracy theory. Or am I?

I was trying to come up with something to write about and this Crypto Lord idea struck me. If you don't like it, please tell me why. If you want to make it into a movie please contact me because I have an extended version of this.

crypto conspiracy steemit artificial intelligence
5년 전 by jiajianou25
$0.03
3 votes
댓글 남기기 4
Authors get paid when people like you upvote their post.If you enjoyed what you read here, create your account today and start earning FREE STEEM!
STEEMKR.COM IS SPONSORED BY

Congratulations @jiajianou! You have received a personal award!

Hi, thank you for sharing, I'm following you ^^