Scalability and Speed: The future of Decentralized Apps with GoChain 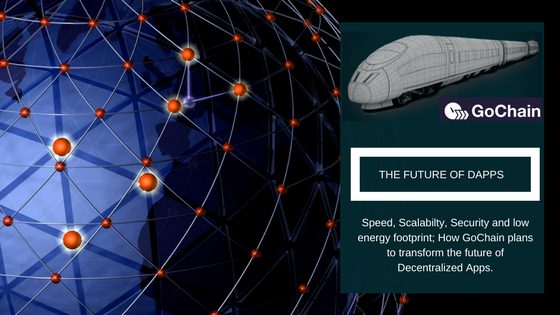 THE RISE OF DECENTRALIZED APPLICATIONS

Beside digital currencies, "smart contracts and decentralized apps (Dapps)" have grown to become two of the most promising applications of the blockchain technology. Dapps were made popular by the Ethereum Network, a platform designed to provide a framework and infrastructure for building and deploying decentralized applications. Today, Dapps continue to generate a lot of enthusiasm and support from different sectors.

The promise of better security, lack of middlemen, elimination of single point of failure, speed and efficiency has far reaching implications. A lot of organizations have began conducting extensive research on how distributed apps can impact their industries and lead to the next innovation. This is shown in the growing size of the Enterprise Ethereum Alliance, a platform which allows a number of fortune 500 companies, startups, tech vendors to learn, and build upon Ethereum’s blockchain technology.

THE STATE OF DAPPS WITH ETHEREUM

Without a doubt, Ethereum is a pioneer in the Decentralized App space, but it has suffered some setback in recent times, firstly, due to vulnerability in the network's security and also, it's limited ability to scale.

In 2016, the Ethereum network suffered a major attack which brought the issue of security to the fore. Not only was beefing up the network's security the only concern at this point, the developers were also searching for solutions to it's scalability problem. The Ethereum network is capable of conducting an approximated 13 transactions per second, and the network continues to witness a growing number of app deployment. This poses an immediate problem and the network is bound to become inefficient under serious load.

Beside security and scaling, excessive energy consumption (similar to other crypto networks) and the centralization of mining nodes in a few hands was technically defeating the true purpose of decentralization and making it unattractive. As digiconomist.net pointed out, Ethereum consumed an estimated 17.92TWh which is at par with Iceland's energy demand (Note that Bitcoin consumes higher). In a world steering towards energy efficiency, this should be a major concern.

Also, according to the developer's at Gochain, a very few number of Chinese companies control up from 70 - 80% of crypto mining (including Ethereum mining). This should also be a major source of worry for a supposedly "decentralized" platform whose aim is to discourage the centralization of power.

HOW GOCHAIN PLANS TO BE DIFFERENT?

For "decentralized apps" to grow to it's full potential, it's important to solve the main problems revolving around security, scalability, energy efficiency and concentration of power in a few hands. These were the goals of the developers of GoChain.

Gochain is proclaimed to be the next generation blockchain. It offers an improvement over Ethereum's codebase with focus being on enhancing scalability immediately, increasing security, reducing energy footprint and making the blockchain truly decentralized. The platform currently has a working prototype capable of handling as high as 1300 transactions per second as against Ethereum's 13 transactions per second.

Gochain dumps the energy demanding Proof-of-Work (POW) consensus algorithm for Proof of Reputation (POR), a hybrid of Proof-of -Authority(POA) which offers more security and lesser energy demand. With POR, transactions are validated by approved accounts called validator. These validators, set to be 50 in number, will be initially selected by the GOChain developers from 50 different countries. It is believed that the geographical distribution will balance the spread of power and deter attack on the GoChain network. It will also make it less prone to a shut down due to aggressive acts from a single government.

The validators' identity will be publicly declared and the responsibility for subsequent selections will be handed over to the GoChain network.

Validators are incentivized to process transactions while putting their hard earned reputation on the line. To make this more effective, only companies (like venture backed startups, VC) will be allowed to become validators as they have more at stake when it comes to reputation. This will bring a lot of sanity to the network. 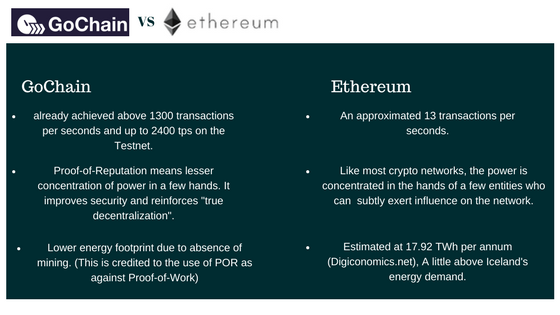 note that "developers currently using Ethereum will be able to seamlessly transfer to the GoChain network without making any code changes". They stand to benefit from 10x more decentralization, 100x increase in speed and 1000x improvement in energy consumption as promised by the GoChain Network.

The adopted POR is also envisaged to help solve scaling problem along with the ability to integrate off-chain solutions like raiden or Plasma. Not only is POR expected to help with scaling and security but it will also help reduce the energy demand for processing blocks to a large extent making the network greener.

The project is already at an advanced stage with a testnet and work is not slowing down. Having members with good track records and a broad range of experience in the industry is usually an important indicator of success for any project. ( You can learn more about the GoChain Team's impressive records here ).

Visit GoChain to learn more about the project or join the pre-sale.

Here are other useful resources to help you know more about the project and make your decision.

A submission for an @originalworks contest

crypto ico business blockchain contest
2년 전 by ninjadroidx45
$0.05
4 votes
댓글 남기기 1
Authors get paid when people like you upvote their post.If you enjoyed what you read here, create your account today and start earning FREE STEEM!
STEEMKR.COM IS SPONSORED BY

You just received a Tier 0 upvote! Looking for bigger rewards? Click here and learn how to get them or visit us on Discord
$0.00
댓글 남기기