So I've recently found out about something called Bitpetite.com

So basically Bitpetite is a HYIP service like Bitconnect but it has a totally different system and pays out WAY faster.

Note-The service pays out hourly if you want to liquidate money every hour you can.

Here is my current investment a friend and I put in a few days ago. 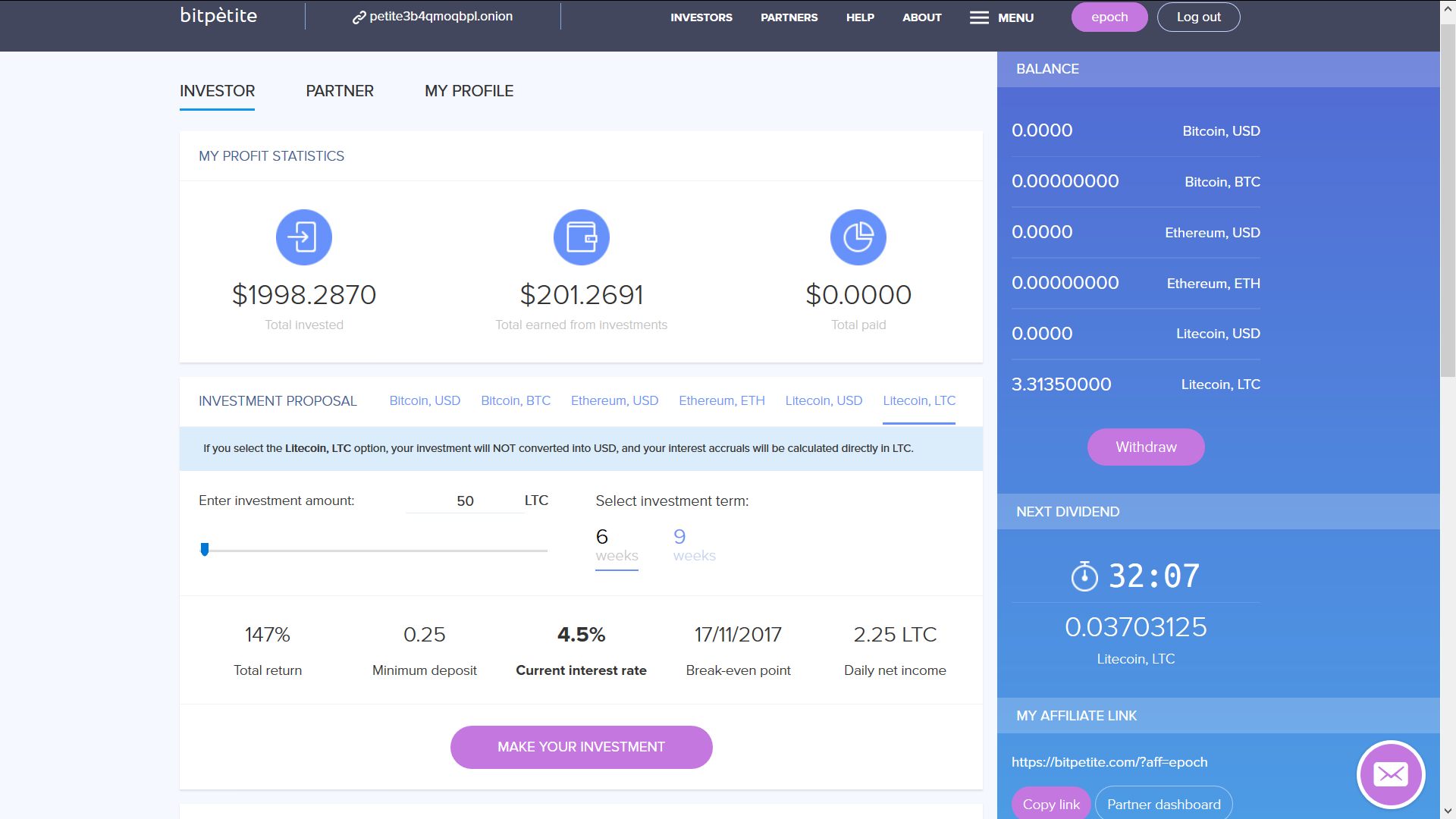 If you look closely it says my total payout so far is 200 dollars and my next payout is 0.037 Litecoin which is in half an hour.

What I like about the platform is everything is clear and concise and made easy for you if you know what you're doing (cryptocurrencies in general).

So I'd suggest heavily to invest, This will soon be seen as Bitconnect's main rival and has thousands of new users daily.

HOLD UP* People are saying I can't advertise this HYIP or any HYIP including BItconnect without a "Disclaimer" sign telling readers that services like these are bound to collapse.

HYIPs are somewhat "Ponzi Schemes" due to them needing new investors money initially for the business to run. HYIP are said to be bound to fall apart eventually. Whether it's a week later or a month later, eventually many users will be left locked out of their balances.

I don't recommend investing anything you can't lose into an HYIP. That means no rent or retirement funds!

crypto investments money hyip life
3년 전 by thesteemdream44
$0.05
13 votes
댓글 남기기 24
Authors get paid when people like you upvote their post.If you enjoyed what you read here, create your account today and start earning FREE STEEM!
STEEMKR.COM IS SPONSORED BY

firstly, you will be downvoted by steemcleaners for 2 reason:
Spamming referal links
posting Ponzi scam

Is it a ponzi scheme if it pays out and has a good service? I don't want to be down voted, I believe in this just like the 50,000 users and the users on Bitconnects "ponzi scheme". I think if this service wasn't a tumblr then it would be a ponzi scheme.

Ok I will put a disclaimer in my next article about this. I still believe that this service can sustain because of the fact that in order to have a good tumblr service you need people investing new money constantly in order for it to be successful because of the process of mixing the btc or other currencies.

But ALSO I know that this service is a little sketchy due to the partners putting there names up, but the creator is completely anonymous.

And I can prove to you mathematically that bitconnect business model (even without the fake "trading bot") is very profitable for the company while it pays the costumers.

I will eventually =)
And trust me. it will not raise trust on the platform, probably the opposite =)

There is an article already on how it works. HERE https://steemit.com/scam/@thegrinder/the-bitconnect-scam-exposed

actually that is his take on it. only opinion. tough most is pretty well connected

Please feel free to ask questions also tell me if you sign up!

There should be a huge "Disclaimer" sign telling readers that services like these are bound to collapse.

99% of HYIPs are Ponzi Schemes that will fall apart eventually. Whether it's a week later or a month later, eventually many users will be left locked out of their balances. I don't recommend investing anything you can't lose into an HYIP.

Don't be surprised when you can't log into your account anymore, or if the site "mysteriously" disappears.

Will do, I will put it but I don't want to advertise something I'm investing in as "bound to collapse" if i actually believe it won't anytime soon.

I will try this platform

OK it is a ponzi scheme in the sense that they need new investors money to run the business but also, this and two other riskier HYIP are paying me out right now, and I vouch for them because I trust them to run for at least a year in all and both are at around 3-5 months running.

Listen... take out your referall... specially if you are saying that yes its a pyramid... if steemcleaners sees you he will downvote you.... I got downvoted once... took me a week to recover

took out referral, wasn't trying to argue with you just don't know these new rules. Shouldn't expect you to back up the rules you don't make them.

understand this... i wasnt threatning you... i wasnt mistreating you... i was warning you to the rules and consequences... i was trying to help... sorry for that.... seriously don't understand why people when they dont know something make up what is needed to validate their opinion.... the community makes the rules... and the community kills every scam and spam poster. i know the rules i already told you twice or thrice that I got fucked by them... but whatever, I am out

There are articles about bit petite that say it's a scam but being used from 2 months ago. If you call this a scam you'd also call bit connect one too.

firstly I didnt say it wasnt.... anything that tricks the costumers is a fraud. or as I call it Theft with a smile. but bitconnect can sustain itself. that one need constant and ever increasing ammounts of money entering to keep it spinning.... and please dont argue this with me. lets make a bet on it if you want. and still you havent taken the scam nor the spam down... i am not warning you... it will happen and when steemcleaners downvotes you, you will be very sorry you didnt take it out.

@cmtzco has voted on behalf of @minnowpond. If you would like to recieve upvotes from minnowponds team on all your posts, simply FOLLOW @minnowpond.