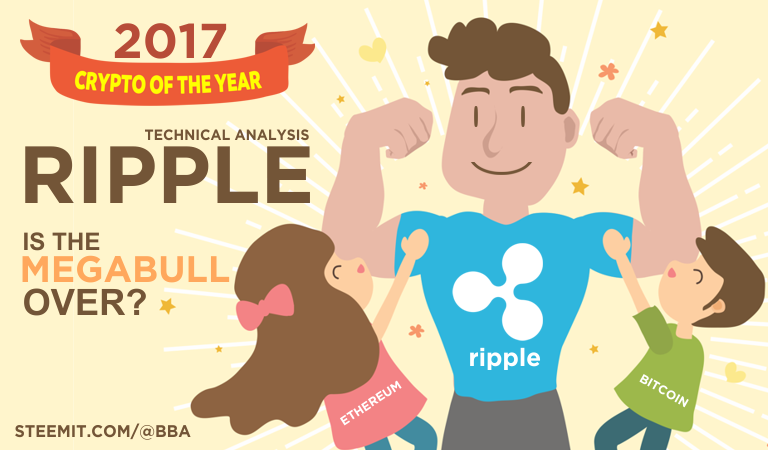 A question that is puzzling the minds of Ripple investors as its market price continues to plummet.

Hello everyone and welcome to another free technical analysis by Bieber Analytics, exclusively on Steemit. My name is Bieber and today I am going to spill the beans about Ripple so you can decide whether you should keep hodling (holding) your Ripple coins or sell them all before it’s too late! But first, let’s talk a little bit about Ripple.

Developed by Ripple (the company) in 2012, Ripple is a digital payments network that allows global banks to transact directly in real-time using its digital currency known as XRP.

Earlier in March this year, XRP was only trading at around $0.006 before news about the Japan Bank Consortium having plans to use Ripple began to spread like wildfire. The ripple effect of that news skyrocketed XRP’s value by 72 times, setting an all-time high price of $0.43 in less than three months. The price has since undergone a major correction and continued to hover above $0.20 in the past few weeks.

Naturally, this raises concerns from investors who have poured huge sums of money into Ripple which currently holds a market cap of $9.6 billion, particularly those who bought at the top. Those concerns grew into fear just as myths from skeptics began to surface.

It is evident that the myths have played a hand in the price plunge.

“Myths which are believed in tend to become true”, George Orwell

Like the Mythbusters, I am going to bust every one of those myths so that you get your facts right. Before we proceed, keep in mind that I am not a Ripple enthusiast. Though I will admit that I am a Steemit enthusiast -- Go, Steemit!

Honestly, I am just someone who dislikes unfounded truths so here we go.

Myth: The banks’ adoption of Ripple has nothing to do with XRP because they will use their own proprietary cryptocurrency on the Ripple network.

Truth is, Ripple (the company) will solely use XRP for its Ripple network. This means when the banks use Ripple, they use XRP too.

Myth: Unlike Bitcoin, XRP is centralized!

Way off the charts! According to this post from the Ripple official blog, XRP will become even more decentralized than Bitcoin.

Let’s do a case study here. The SWIFT network processes 29 million FIN messages per day on average. If each of those remit a modest amount of $100, then we are looking at a money flow of $1 trillion dollars annually at least. If Ripple takes on just a quarter of that market, it would be huge.

Myth: XRP has an infinite supply like the fiat currency. It will hyper-inflate and become worthless.

On the contrary, there is a finite supply of XRP and every transaction burns a small amount of XRP. Just like fuel, once they are burned, they are gone for good. This means the total supply of XRP reduces over time, thus increasing its value.

Facts aside, is Ripple dead? Is it going to crash really hard? Am I gonna rekt (wrecked) myself buying Ripple? Now that you have reach an equilibrium between myths and facts, let’s move on to the interesting stuff!

Here we have a daily chart of XRP -- I’m just gonna call it Ripple. Using some of my Voodoo magic (Fibonacci and the Elliot Wave), I was able to predict its long-term trend and forecast where the price is likely heading in the next few months.

Just like Steem, I believe that Ripple is going to tenfold increase its value by the end of this year. While Ethereum and Bitcoin are busy racing each other in front, Ripple is going to catch them off-guard and take the lead in terms of market cap.


Simply put, Ripple is going to be the best performing crypto of the year, if it has not earned that title already.

“I dunno, man! The price is still dropping!”

You mean, despite the fact that Bitcoin has dropped almost $1,000 from the top? Well, of course but from Ripple's standpoint, I would say that it is holding up exceptionally well. It's crazy that Ripple is up 4000% in three short months but if you think -that- was the Megabull, wait till you see what’s coming!

Where can you buy Ripple (XRP)?

I am currently trading Ripple on Bitfinex. You can click here to sign-up with them if you have not used them before.

If you click on my Bitfinex link above to sign-up an account with them, I will earn 10% from your trading fees and you will get a 10% discount off of your trading fees for the first month following registration.

Ripple is also available for trading in these exchanges:

If you have enjoyed my trades and want me to do more, please upvote and resteem. If you want me to analyze a particular crypto for you, feel free to suggest it under comments and I will choose the one with the most upvotes.

Thank you for your support! Now I off to buy some Ripple.

Disclaimer: Please always do your own due diligence, and consult your financial advisor. My trades are solely intended for personal use. I never provide any actual trading recommendations. Trading remains at your own risk. Never invest unless you can afford to lose your entire investment.

cryptocurrency money technology bitcoin steemit
3년 전 by bba43
$7.29
49 votes
댓글 남기기 5
Authors get paid when people like you upvote their post.If you enjoyed what you read here, create your account today and start earning FREE STEEM!
STEEMKR.COM IS SPONSORED BY

Here is another news article on Ripple to help you get your bearings. https://www.americanbanker.com/news/inside-ripples-plan-to-make-money-move-as-fast-as-information

Enjoyed the article, thanks.

Just one quick thing. You say that "This means when the banks use Ripple, they use XRP too". This is not necessarily the case, other currencies and pairs can be traded on the ripple network, however the cost will be greatly reduced by using XRP, especially for pairs that are not commonly held by banks,. in this case money would transfer from bank to bank through 3-4 different
currencies before getting to its destination. With XRP the bank can cut the cost and time by transferring via XRP and then directly to the destination.

While other cryptocurrencies like Bitcoin and Ethereum can be sent through the Ripple network, they have to use a third-party counterparty gateway. Just like sidechains to Bitcoin, there will be counterparty risks. Think of it as an additional service that can be accommodated by Ripple but not necessarily. Whereas XRP being the native currency of Ripple will be primarily used by the banks, always. There exist no scenario where XRP is not used. Thanks for your support.

We are faced with risks day in and day out. Don't have to go all in to test the "water". Thanks again.

Interesting article. Thanks for bringing this to our attention. The current total market cap of all cryptos might seem high but blockchain is here to stay and will involve all our lives. I do see a bright future for everyone that's hold's their coins with a long term vision. An interesting website I found: https://www.coincheckup.com I'm really happy with this site that gives complete coin analysis for every single crypto. Go to: https://www.coincheckup.com/coins/Ripple#analysis For the Ripple Investment research report.