Is Shapeshift Dying? You're making me nervous, guys...

I've had Shapeshift exchanges in the ether for nearly a week now. I've spoken with their support staff and they are supposed to be refunding me, so I guess everything will be OK... though I won't get my crypto changed, I guess. Kind of stupid to pay transaction fees to send bitcoin back and forth worthlessly like that, but at least they're not ripping me off? 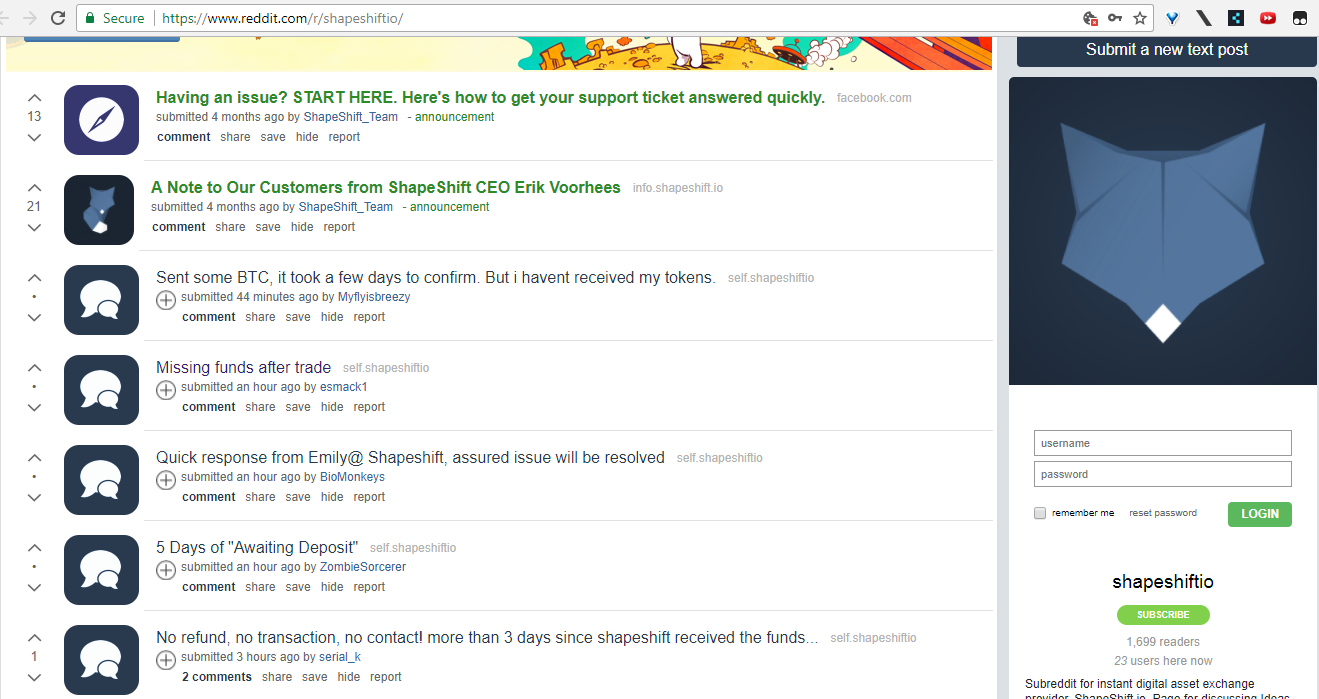 I'm not really sure what is going on, but it makes me nervous when we're talking about massive day long exchanges that never go through and you have to contact the company to receive your money. I used both Shapeshift and Changelly at the same time and the Changelly transactions were as instant as you'd expect anything to be. I kind of don't like that Steem has been "temporarily" disabled in Shapeshift since the dinosaurs roamed the earth either, but that's not really what I'm focused on here.

The fact of the matter is that they need your trust to operate. Even if temporarily, you're sending your coins to an outside location, so there cannot be some unexpected delay ON THEIR END without a single word from them until you chase them down. That's just not how you do business.

I don't know that they're malicious, but in the world of crypto there seem to be signs that a company is going to the wayside. I don't want to bash them too much, but if they want to continue to do business they need to pull it together. Having a pretty website is great and all, but if your service doesn't actually work then you've got a problem.

I really want people coming into the cryptocurrency world to have a relatively painless experience with the big companies in the industry. There needs to be an extraordinary operational standard for companies operating within the space and the community needs to hold them to these standards. If companies are being unreliable or unethical they need to be branded as such and not supported.

I'm not necessarily saying shapeshift is being unethical or anything though. I'm just saying be careful who you send your money to. Hopefully they can turn things around, because I think their service is valuable when it functions reliably.

Anyways, anyone else been using shapeshift/changelly/blocktrades? Have you had problems? Did they work great? Are they really safer/better than using a traditional exchange such as bittrex/bitfinex/etc?

if you want to give Changelly a try here's a link: Click Me!!
(yes it's an affiliate link, why not?)
I'm not going to link to Shapeshift, because I can't say I've had a good experience recently. You can find em if you want to.

cryptocurrency steem money brains
3년 전 by brains57
$37.92
23 votes
댓글 남기기 15
Authors get paid when people like you upvote their post.If you enjoyed what you read here, create your account today and start earning FREE STEEM!
STEEMKR.COM IS SPONSORED BY

They have not given us the ability to exchange Seem por SBD under the veil of "Temporarily Unavailable" for over 9 months. Eric Voorhees seems to setting his goal toward the way of MtGox, Bitinstant, and BTC-e, putting the customer last, which always sends things spiraling into jail and/or utter destruction of the company.

I used to like talking to you Eirc. I am glad I never got into a partnership with or Trace Mayer as discussed back in pioneer days.

Yeah, That kind of seems the direction that they're heading in. Sad to see thing go that way though.

uh I hate such situations. Its not good for anyone. I hope evrything will be smoother in the future :)

I was Using both : Changelly , shapeshift.io
but after that i will use only changelly ^^
Thank For Let Us know ! Following you :)

Changelly has always worked pretty well for me, but it's still probably a good idea to keep your ear to the ground just in case something is going on. Just sayin' :)

Sir it is important to be careful who you send your money to. Because it's your money and you have to invest it probably at right place .

Haha yeah, I kind of wish I had researched into shapeshift again before using them. Ah well, you live you learn ;)

i saw that once but never used it

Hi
how to play let a lot of like, please tell me please