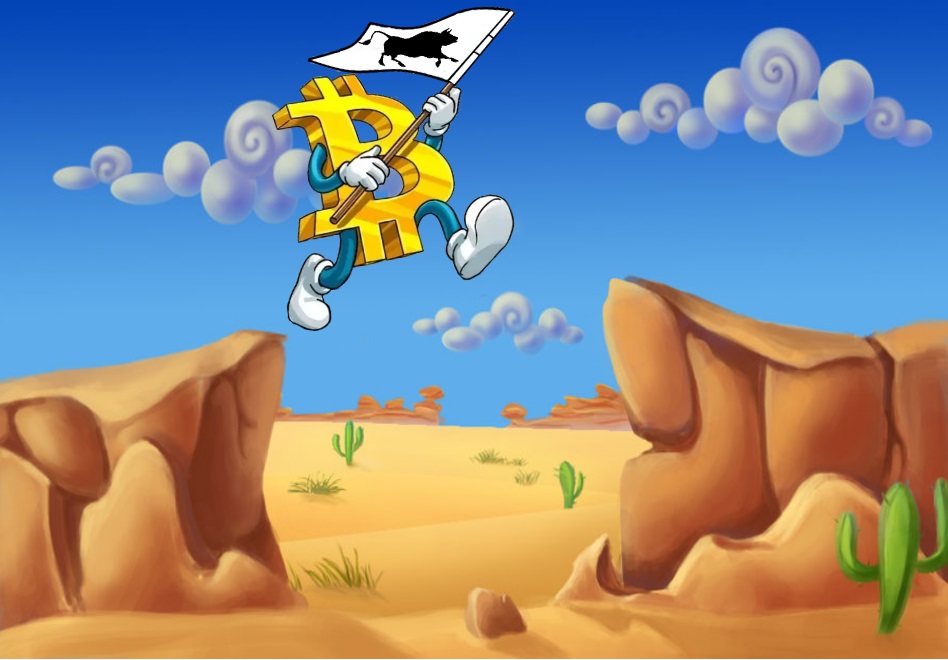 Last Thursday, the price of Bitcoin and other cryptocurrencies spontaneously jumped by more than 10 percent. Since then, optimistic sentiment drives the prices further up. Can and should one declare the bear market already ended?

What a jump. On Thursday at about 12 o'clock German time the Bitcoin price jumped up. Within an hour he had risen from about 5,600 to 6,300 euros.

This price increase was observed on all crypto exchanges and extended to all cryptocurrencies. Total market capitalization jumped from about $ 275 to about $ 300 billion; the ecosystem was worth about $ 30 billion more in an hour. Allegedly, such a high volume of trade had never been seen within an hour.

Once again, you can see that most cryptocurrencies are in sync with Bitcoin. When it goes up, some coins go up a little faster, but when they go down, they fall a little bit lower, but by and large, the market movements of Bitcoin and the other cryptocurrencies are largely identical. There was no Coin who did not benefit from the jump on Thursday. Positive signals are transmitted in seconds to all exchanges and all currencies.

Cascades through the stop loss

The reason for this spontaneous eruption was probably due to the cascade effect of stop losses of margin traders on the exchange Bitfinex. The explanation is a little, but not too complicated: Bitfinex can trade with leverage. This means that you borrow money or bitcoins to bet on the future course of the stock with a multiple of the bet. If you go short, you are counting on falling, who goes "long", on rising prices.

Some traders now protect themselves against losses through so-called stop losses. These are orders that only come into effect when a certain price is reached. For example, you can choose to sell when the price falls below the value of X or buy when it rises above Y. Many margin traders use this tool to hedge profits or reduce potential losses.

Shortly before the jump on Thursday, the amount of shorts was at an all-time high. But as the price did not fall, but remained stable or even increased slightly, this triggered the stop-loss buy order. This had a cascading effect, as the buy orders drove the price higher, which enabled even more stop-loss orders. So on Thursday within one hour, the shorts were liquidated over almost 40,000 Bitcoins.

The most amazing thing about this jump is not that it happened - but that the level could hold. One would have expected the markets to cut profits and the prices fell again after a short time. This did not happen. The price not only remained at a higher level, but increased even further.

The bulls had probably licked blood. Over the weekend, the Bitcoin price rose to 6,750 euros, and the market capitalization of all cryptocurrencies reached nearly 340 billion dollars. That's an increase of a good quarter within a few days. Such a violent move could show that Bitcoin has bottomed out at around $ 5,500, and that markets value this price as a buy signal.

This is flanked by some wonderfully good news: I have yesterday mentioned that Boerse Stuttgart will soon bring Bitcoin trading to its customers via a subsidiary. In the US, too, the financial industry continues to have a big appetite for digital coins: The asset management of trading legend George Soros has recently announced that it intends to start trading in virtual currencies - even though Soros himself used to be critical of Bitcoin on a regular basis. This could be understood as the surrender of a permancer. The article by Bloomberg, which brings this news, calls next to Soros even more large funds and billionaires who want to get into cryptocurrencies. Shortly thereafter, Venrock, an investment company of the Rockefellers, declared to build a position in cryptocurrencies.

The big bubble at the end of the year may have burst, and the bear markets seemed to have broken out, but the big boys in the financial industry are not reluctant to budge into the market. The buying pressure seems to be strong, and it may stay that way for a while. There is a large reservoir of very rich people who still want to invest in cryptocurrencies.

The big bubble at the end of the year may have burst, and the bear markets seemed to have broken out - but the big boys in the financial industry are not reluctant to budge into the market. The buying pressure seems to be strong, and it may stay that way for a while. There is a large reservoir of very rich people who still want to invest in cryptocurrencies.

However, one should not describe too soon the return of the bull market. Although the charts look very promising in the one-week cut, but from a wider perspective are not quite so friendly.

The 3-month chart shows a typical bear market full of bull traps: Whenever it goes up, the price just goes up all the more. There were also more vigorous recoveries than on the weekend, which have also dragged on for weeks. It is conceivable that this scheme will be repeated again. After all, the course has been training in recent weeks something that looks a bit down to earth. The volatility eases off, which could be a good sign in this situation.

And now we increase the resolution a bit and look at the price history of the last six months. If we look at this, one might think that the bubble that developed at the end of last year has largely disappeared completely. This would be a good basis for moving sideways, neither rising nor falling, which would certainly be good news for the development of the ecosystem.

Looking at the 1-year chart, we even see that a mellow uptrend remains intact. The heightened upswing that set in around October or November would have been corrected, but the longer-term line that has been with us since the beginning of 2017 would be unbroken.

But, as so often, remember that the past says little about the future, and that it's the charts that mimic the prices, not the other way round. What's going to happen will probably surprise us anyway. 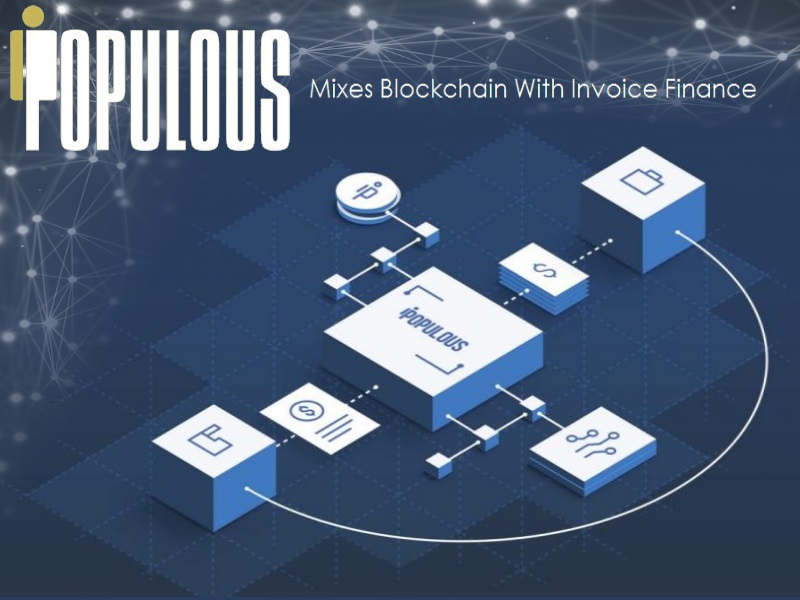 For a long time it had become quiet about the British project Populous. Public relations never came first. However, on April 15, 2018, an important milestone was reached, lifting the project to the next level, the practical application. The course has risen by more than 50% in a row within a short time.

Populous is a peer-to-peer platform that relies on the blockchain to provide small and medium sized businesses with an efficient way to participate in invoice finance.

For many companies, especially for smaller projects, punctual payment of all bills is often a nuisance when the capital inflow comes too late or not at all. This difficulty tries to solve Populous. On the Populous platform, companies can sell outstanding invoices at a discount that is very similar to a debt collection agency, but uses blockchain.

On April 16, 2018, CEO and founder of Populous, Steve Nico Williams, announced that the first signed invoice sale had taken place on the platform.

Since April 16, 2018, selected testers have been able to put the beta version through their paces and examine their functionality in practice. This announcement led to a rapid price increase of more than 50 percent in the last 24 hours. The price for a PPT token is at the editorial time at $23.73 and a corresponding market capitalization of $877 million. 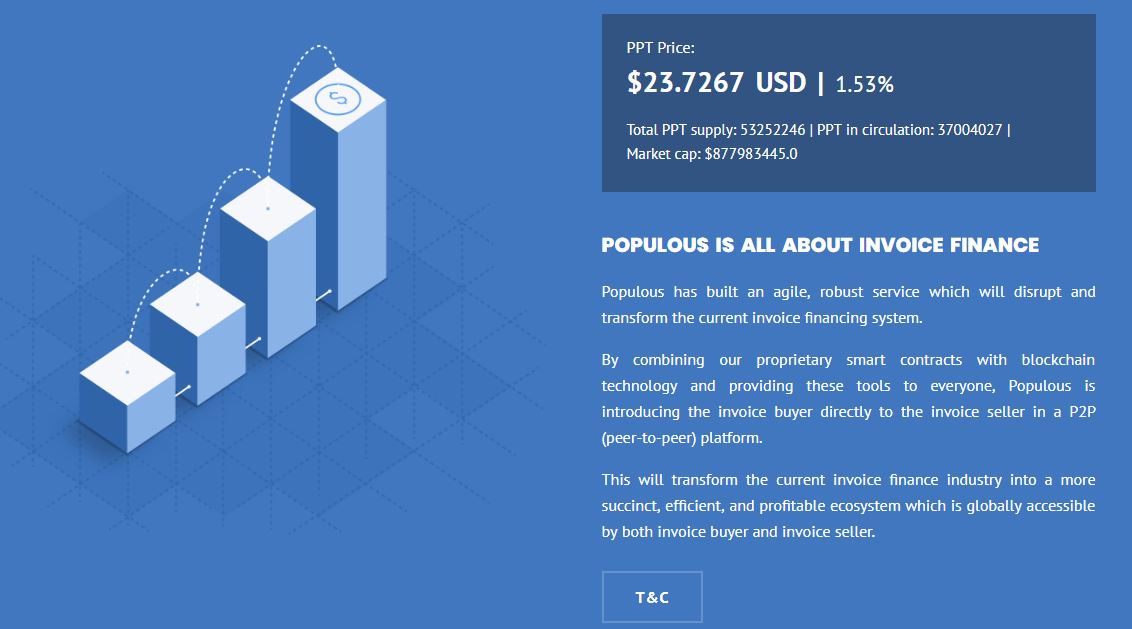 This puts Populous in 25th place of the largest cryptocurrencies. Whether the price increase of longer duration is or only current hype for a short increase in price, remains to be seen.

I definitely think the project is promising. It has a practical application and satisfies a need for which there is a great demand. As a result, this could mark only the beginning of an ongoing rally.

According to the company, there are more than 40,000 users in the UK alone who regularly use invoice financing platforms. As Great Britain is one of the smaller countries in our latitudes (population), a proliferation in the international area could provide a boost to new users for the project.

cryptocurrency blockchain bitcoin populous-platform
2년 전 by danyelk69
$240.75
144 votes
댓글 남기기 27
Authors get paid when people like you upvote their post.If you enjoyed what you read here, create your account today and start earning FREE STEEM!
STEEMKR.COM IS SPONSORED BY

btc to the moon

Your post had been curated by the @buildawhale & @upmyvote team and mentioned here:

Wow I made it again on the Buildawhale Curation Digest thank you so much it feels very good to see that someone appreciates my work and it also gives me a lot of motivation to go on with my work.

Thanks again and you guys as well keep up the good work you are doing for the steemit community.

LOVE&LIGHT for the whole Buildawhale Curation Digest Team!!!
Have a nice weekend :)

Woohoo! Glad I held on to some PPT!

There was a sharp uptick in btc price a few mins ago. it could be a sign of another wave or it could just be a dud. if the prices dont get healthy volum in next 24-36 hours then it could drop down to 7k again. i think bitcoin will be up and back to $20000 for long, because in daily triangle was break out, i think this is new trend will come for bullish trend

you can check detail in here
https://steemit.com/trading/@bangkecol/is-this-the-momentum-for-the-positive-trit-of-bitcoin-and-the-end-of-the-negative-trend-lets-check-this-out

Dear friend @danyelk 👋, I wish u r fine 😃, the currency market fluctuates most often, but the rise of the Atamanian currency market is the end of the decline, thanks for sharing that wonderful information, all the best for you 👍👍😉

Your welcome and thanks buddy hope you are doing good too :)

I am fine , thanks my friend @danyelk 😃

Thank you very much and have a nice day :)

agreed, the market is now testing new low before really bounce up.

Indeed up we go

just wait the day when 800b dollar pump back in to crypto, else we wont see the light.

Great Day to be in Crypto!

I think we can help each other

Who will be the next bitcoin batman?

You got a 11.26% upvote from @postpromoter courtesy of @danyelk!

hoping we stay in the green

We are in the best moment to risk and invest