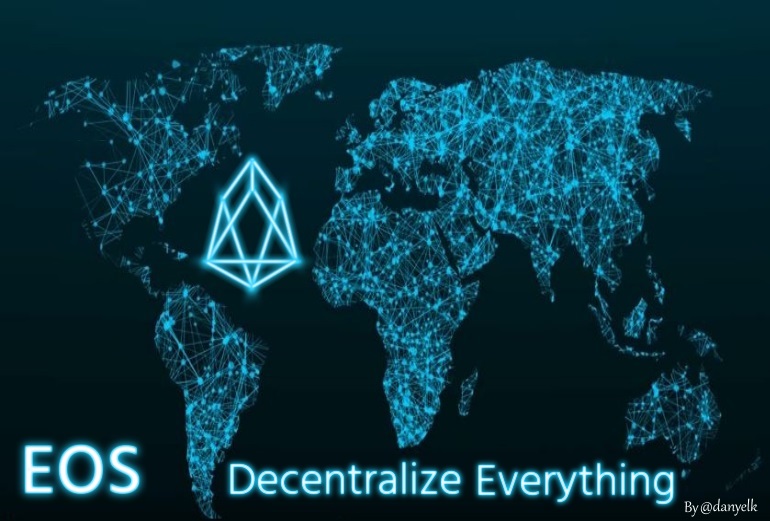 EOS did a big jump in price development in early April. Within one day, the price of EOS jumped from less than 5 euros to more than 7.50 euros. Possible reasons are currently being discussed in the crypto community.

One possible reason for the price increase could have been the release of Dawn 3.0. The update was one of the last important steps from the launch of the Mainnet in June 2018. However, when looking at the chart, it is noticeable that the course on this event has shown no reaction. Another possible reason is the Airdrop of eosDAC which took place on April 15, 2018. In the past, it has often been shown that "free cryptos" can have a good influence on the price performance of a currency and can often even lead to a pump. 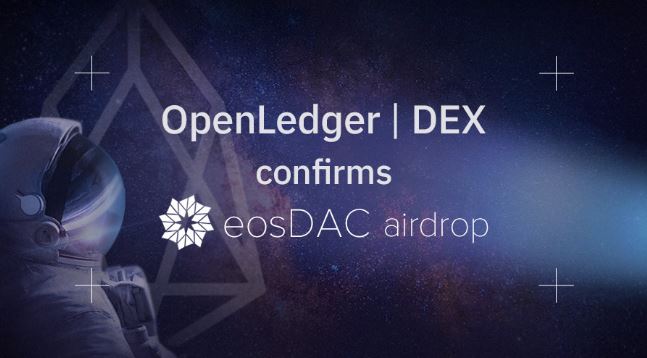 Considering that the pump took place from 10 to 13 April, at least a "rough" temporal correlation can be established. It is surprising, however, that the price went down a little on 13 April.

Equally surprising, from my point of view, is that the price decline has been relatively small. If the pump was triggered mainly by the Airdrop, the course would have dropped a bit more after reaching the snapshot.

In the past few days, it has come out that both ONO, a blockchain-based social network from China and the mining pool Antpool (Bitmain) have applied to become "block producers" on the EOS network.

Block Producers are nodes that play a key role in the Delegated Proof of Stake from EOS. All in all, there are only 21 block producers who generate blocks in EOS Mainnet and receive a reward for their work.

Block Producers (BP) can put themselves up for election by the community. In order to operate as BP, some network infrastructure must be provided to process the transactions.

Just because of the rewards, the position as BP is worth aspiring. Because of this, there is a presumption that Antpool and others might have invested a lot of money in the days of the pump.

Another rumor concerns EOS itself. Because EOS has transferred some of its ingested Ethers, there are voices that suggest that EOS has caused some of the recent increase in demand at the daily auctions themselves.

Which reasons, besides the general positive mood, was responsible for the price increase of EOS, can not be proved. The fact is that the EOS network is live in about two months.

Then it's time for EOS to prove that it really can be the Ethereum Killer. To this day, everything is just expectations and hopes for the future, which are reflected in the price of EOS.

It is also clear that not only EOS is working on the "fall" of Ethereum as the undisputed DApp and ICO platform.

Other projects, such as NEO, TRON, Qtum or Cardano want to replace Ethereum as an ICO platform. The battle for the best ICO platform remains exciting and time will tell which direction the journey is heading. 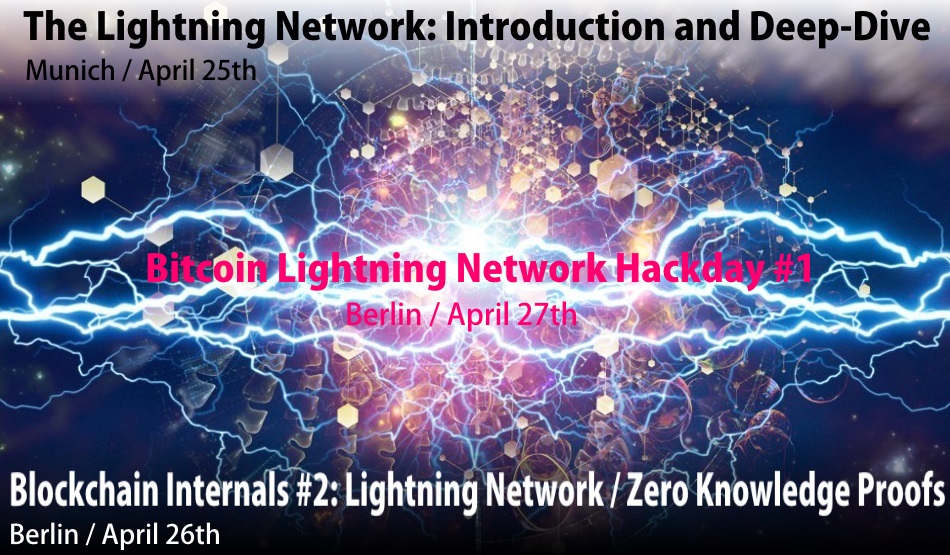 For Lightning fans next week could be exciting. Both in Munich and in Berlin there are several events and workshops on the Offchain network.

In the Bitcoin scene, the Lightning network is currently the topic. While Lightning is the answer to many Bitcoin problems for some experts, beginners and laypersons often face a mighty question mark when they hear about Lightning. To understand how Lightning works, you have to think a few knots in your brain, and to use Lightning, you have to get involved in the technique.

The Lightning Network: Introduction and Deep-Dive

On the 25th of April a Meetup with the title "The Lightning Network: Introduction and Deep-Dive" will take place in Munich. The Munich Bitcoin Meetup has as guests Christian Decker, who developed for Blockstream a client for the Lightning network also Dirk Röder and Florian Maier, both from the Munich-based software company MaibornWolff are there. The event will consist of two parts: first general questions about Lightning will be clarified, then it will go into depth, including a demonstration of how to set up and operate a Lightning node. There may also be an expanded Q & A session as well as a panel discussion on scaling blockchains. Let's start at 6.30 pm in the Innovator Space, Münchner Freiheit 7.

For the following day, a workshop and hackathon is planned in Munich, for which Christian Decker and the developers of Fulmo have already promised. More details have not been announced yet.

For those who do not want to miss all the events next week, it is now time tight. Because on Thursday, April 26, it goes on in the evening right in Berlin. The Blockchain Internals invite to their second meeting under the motto "Lightning Network // Zero Knowledge Proofs". Software developer Lorenzo Manacorda will present the Lightning Network here, including its potential and challenges. Details about the second talk about zero-knowledge proofs are not yet known. The venue is the Native Instruments, Silesian Road 30. Admission is from 19 o'clock in the evening.

After a break of one day, the next Lightning event will finally take place in Berlin on Saturday. The Bitcoin Lab Berlin hosts the "⚡ Bitcoin Lightning Network Hackday # 1 ⚡" This is the prelude to a series of Lightning Hackdays. Participants can build a Lightning node on a Raspberry Pi, which is provided by the Bitcoin Lab. If you want, you can bring your own laptop to take it home in the evening as a Lightning node. In addition, Stefan will be hosting a multi-hour workshop on the Honey Badger Podcast, immersing you in all the components of Lightning - Payment Channels, HTLC, Onion Routing. Third, everyone can contribute their own ideas, try and discuss. The workshops start at 14 o'clock in Full Node in the Skalitzer Straße 85, end should be around 22 o'clock.

If you're on these days in one of these cities and a Lightning fan I can only recommend you to go to one of these events.

cryptocurrency blockchain eos lightning-network events
3년 전 by danyelk69
$318.76
177 votes
댓글 남기기 26
Authors get paid when people like you upvote their post.If you enjoyed what you read here, create your account today and start earning FREE STEEM!
STEEMKR.COM IS SPONSORED BY

I just bought my first Eos few days ago :)

EOS has the potential to be the top crypto...

I think EOS offers a much better distribution model with airdrops, than the current ICO model where you buy additional tokens that offer no utility and in most cases, no return!

EOS will be at the top... mark my words

That's what I am hoping for because I have a shit ton of EOS ;)

It would not surprise me to see $100 EOS this year. The fact that it scales so high with developer and user friendly only makes sense why its going to the top of the Crypto food chain. Something like 80% of all blockchain transactions are taking place b/t Steem, Bitshares and EOS once it launches. That says a lot about DPOS system like public prefer it b/c much faster and user friendly than rest of blockchains.

yes,you are correct mto your pints.thank you very much to write about eos.I love eos.

EOS remains talk of the town in Nigeria presently. Lot of folks in Nigeria are talking about it right now and promoting it too. There is even meetup scheduled to hold in the city of Lagos tomorrow. We continue to look on to the future with optimism. No one knows where these whole lots gonna land us.

Good to be here again

I love to see how EOS price is recovering much faster than other cryptos. Price has a steady uptrend for the past 10 days. and just crossed $10 resistance line.

On top of all the news you mention, I would add the great work they are doing closing agreements with VC's to create funds to push EOS based projects. Thanks for this info. I am thinking of investing on EOS. From your write up EOS seems promising and the sky seems to be the limit for EOS. Good job sir @danyelk

EOS will put ETH to shame.

Funny how everything works out :)

Thanks for great post..i appreciate this cryptocurrency...

EOS has a really bright future ahead.

The EOS Dac airdrop certainly helped give it a nice push :)

You got a 14.68% upvote from @postpromoter courtesy of @danyelk!

We are not a shop or service stuff :) We are AI-powered trading ecosystem. Follow us @aitrading.com and learn more about AI, ML and blockchain.

Good article and has some foundations for the increase in price. Although EOS had a stepback las week, now we can see that its price is back at all time highs with a strong buy signal. DYOR!

After Dan came to know that steemit is now handled by scammers, he got into something better called EOS.

He was too smart to get out of it. As whats going on here on steemit would have spoilt his reputation and class. 30% of my entire crypto portfolio is EOS..