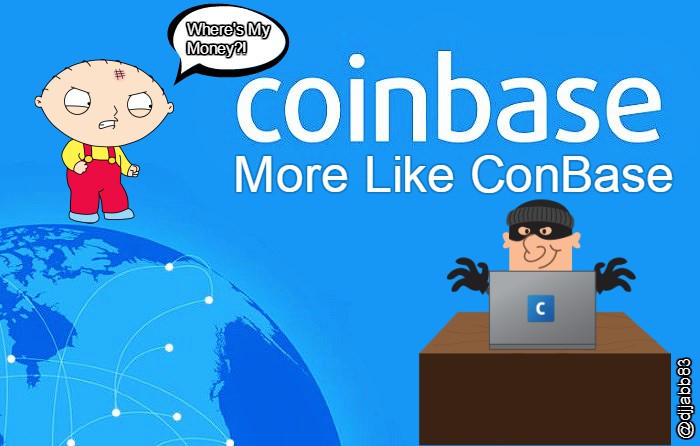 ****UPDATE: I received an email from Coinbase last night stating that it was in fact Visa's fault in this disaster. They guaranteed me my money would be returned as soon as possible. And upon checking my bank account this morning, I have in fact received all of the monies they double charged me for. So, I guess if you were effected by The Great Coinbase Heist of 2018, then you need to contact your bank or card issuer AND contact Coinbase to set up a claim with them. Those were the steps I took to get my money back and it worked. So hopefully others can have the same luck as I. ****

Thousands of users of the crypto exchange Coinbase woke up the other day, feeling robbed and sick to their stomachs. I woke up yesterday with that same exact feeling. What on earth is going on with Coinbase, more like Conbase?

This was not the way I wanted to start my day. Wake up, make some coffee, check my bank account, and see that I have been double charged for purchases made last month, resulting in a negative balance.

Nine total purchases were double charged to my personal bank account, for a total of around $250. Which is nothing compared to what some have been double charged for. So far today I have spent three hours on the phone with my bank and Coinbase. All nine double charges have been disputed with my bank and a determination can be expected within the next 8 days. Which is absurd. Coinbase was unable to provide me with any real info, except for the same message they have been spamming to every one effected by this.

Here are the official posts from the Coinbase Twitter page as to why this has happened: 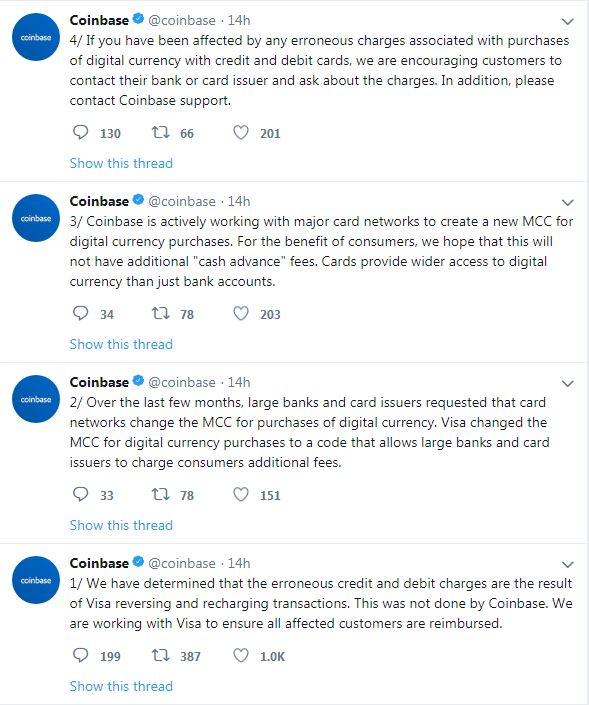 Those explanations are all fine and dandy except for the fact that they have no idea when we will get our money back. And until then, my bank account will be in the negatives. There goes my plans for this weekend.

Were you or anyone you know effected by this fiasco created by Coinbase and Visa? Did you get any more information from either as to when we can expect our funds to be back in our accounts?

cryptocurrency crypto coinbase crooks djjabb83
3년 전 by djjabb8342
$0.14
14 votes
댓글 남기기 9
Authors get paid when people like you upvote their post.If you enjoyed what you read here, create your account today and start earning FREE STEEM!
STEEMKR.COM IS SPONSORED BY

Do you know of any alternatives to coinbase?

There are a few that accept credit/debit cards as a means to purchase coins with. Bitstamp, Coinmama, and Cex.io first come to mind. I can't really remember any more.

thanks for the info

I have to go through my transactions more clearly, but I don't think I was affected thankfully!🙏

You're one of the lucky ones! This has been a MAJOR pain in my ass today.

Man I really hope this gets resolved though.

I do too. I have thoroughly enjoyed my time using Coinbase, up until now.

Resteemed by @xtdevelopment! Good Luck!
Curious? Then read our introduction post
Get more with the #NanoCheeZe initiative

Congratulations! This post has been upvoted from the communal account, @minnowsupport, by djjabb83 from the Minnow Support Project. It's a witness project run by aggroed, ausbitbank, teamsteem, theprophet0, someguy123, neoxian, followbtcnews, and netuoso. The goal is to help Steemit grow by supporting Minnows. Please find us at the Peace, Abundance, and Liberty Network (PALnet) Discord Channel. It's a completely public and open space to all members of the Steemit community who voluntarily choose to be there.