Kraken's Been Down For 48+ Hours And The Devs Are Hallucinating

Kraken shut down (Oh crap!) for upgrades (thank god!) with nothing but a twitter notice a couple hours before. (I'm not exactly sure of the timing, might have been even less notice).

I'm not going to lie, it's been painful. If Kraken had been I would have/-could- have made minimally $10k from a move on just one coin I was watching, and I would have bought other coins on the big dip that continued to dip as Kraken was down (so who know's how much those buys would have earned in the future).

But man, some people lost real money, and lots of it. We'll see what that looks like when Kraken comes back online.

I was watching the updates here: https://status.kraken.com/incidents/nswthr1lyx72

What you see there now is not what was there for a little while late last night.

This is what was there last night (I laughed and figured the guy would get fired): 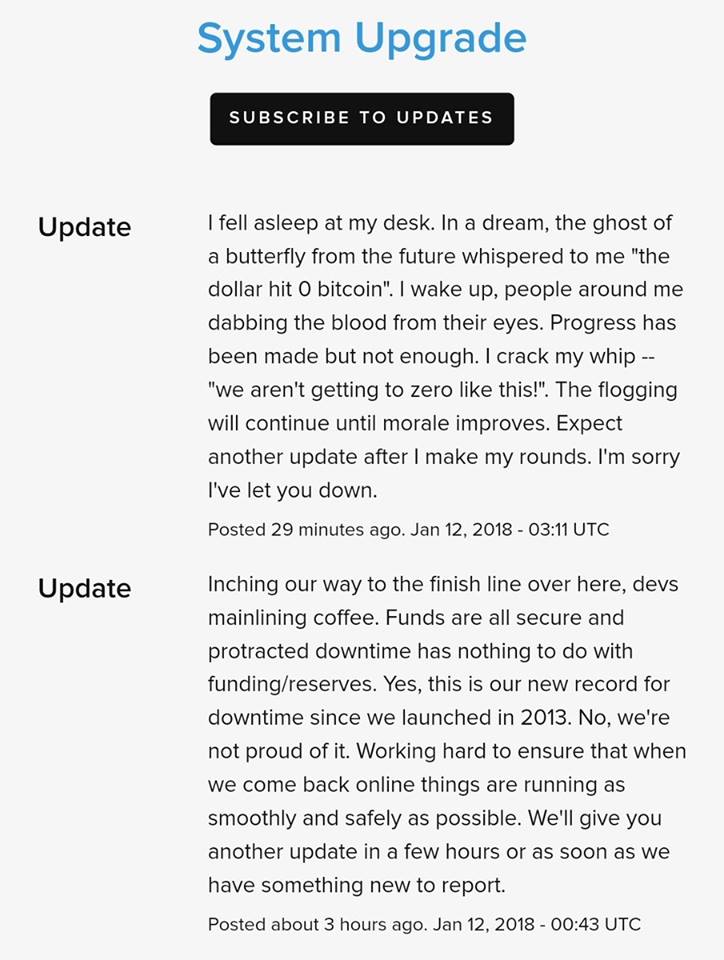 (Source: somebody posted a screenshot on twitter, and I saw it in real time before the language was removed)

Ha! Yikes. What was going on in that dude's addled brain?

I can imagine the scenario:

Then the whole next day passed, then it was 9pm and they were all hallucinating from lack of sleep and too many stimulants to keep them awake.

Then somebody had the bright idea to be funny on the updates. And then a few hours after the first one, either:

A. Somebody in the executive suite that HAD gotten a good nights sleep finally looked at the updates page and read it and IMMEDIATELY got on the phone to the workspace and said "You delete that shit RIGHT NOW and put up a normal boring update!"

And/or B. The wonky dev updater noticed the thousands of hate emails and social media comments kraken was getting from the 'funny' update and came to his senses, quickly deleting them and putting up the normal boring update language.

ULTIMATELY, This Downtime Is Good For Everyone

Either way, I'm ok with kraken being down even longer so that there will be less/no errors, and so the guys doing the work can have fresh eyes to make sure everything goes smoothly when it does come back on line.

I hate that kraken has been down for 48+ hours, but if the upgrade results in kraken finally being a working exchange where you don't have to put in an order 20 times before one (and sometimes two) of them actually get placed, then that's great for all kraken users (and future users, as more people will use Kraken if/when it actually works).

Also I'm secretly hoping that they're secretly adding new coins so when they come back online there will be a big surprise announcement.

cryptocurrency crypto trading investing kraken
4년 전 by joshuatucker49
$3.82
7 votes
댓글 남기기 2
Authors get paid when people like you upvote their post.If you enjoyed what you read here, create your account today and start earning FREE STEEM!
STEEMKR.COM IS SPONSORED BY