Back at a market cap of 400 billion. Let's keep that upward momentum!

Welcome to my Cryptocurrencies Market Overview for Monday, April 23, 2018.

Today in the news: 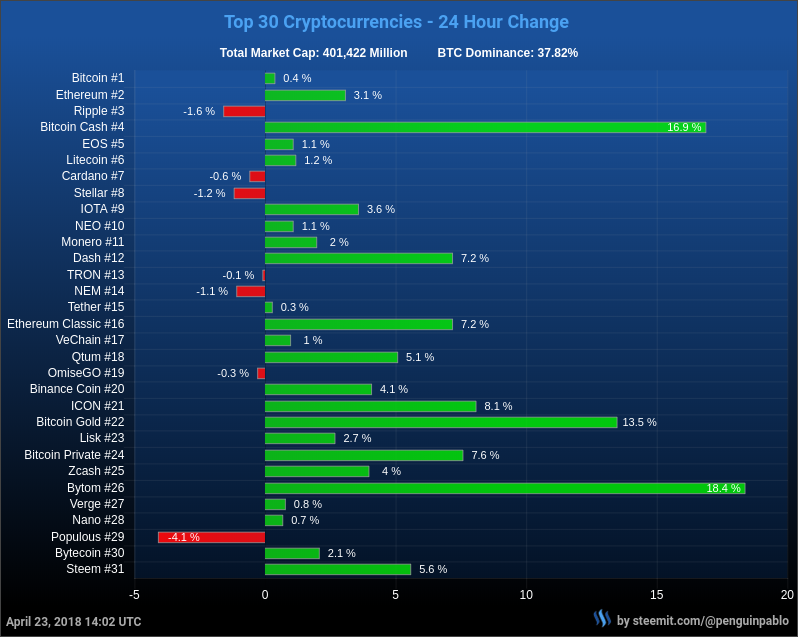 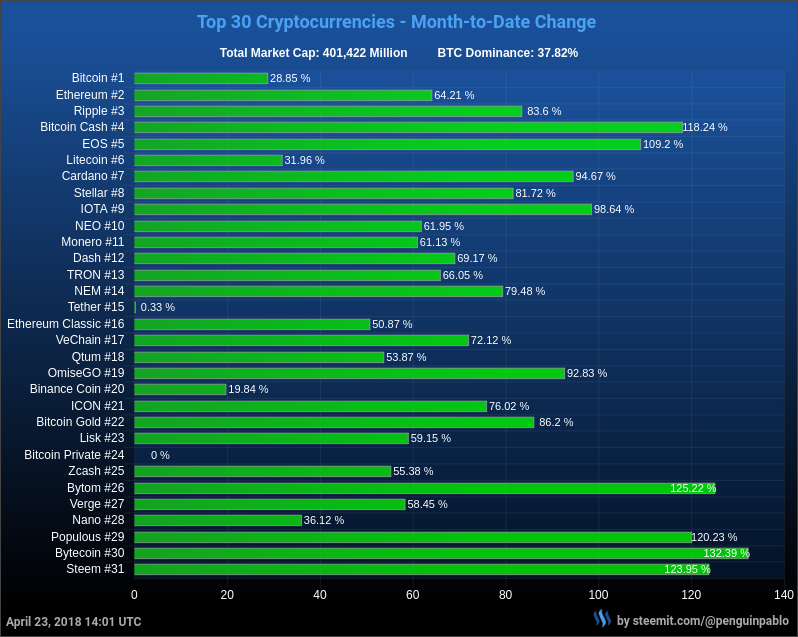 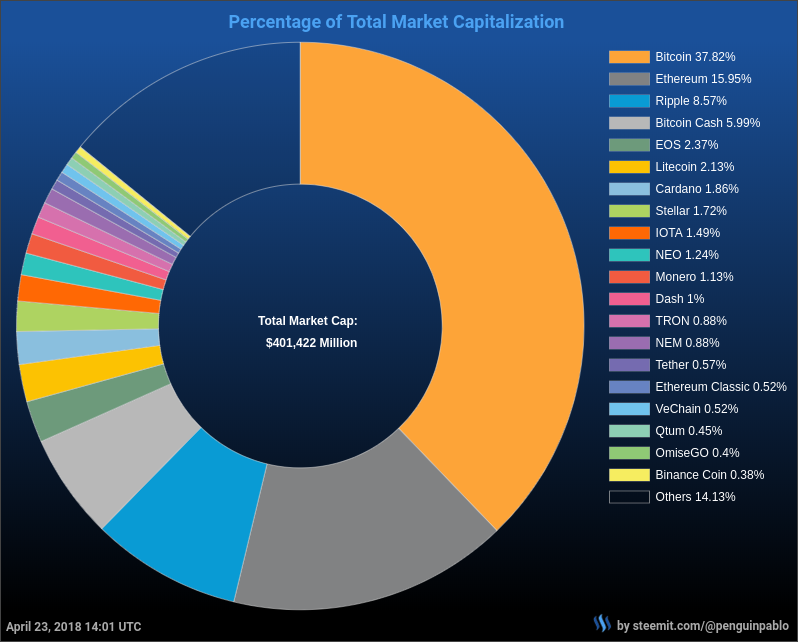 Feel free to use and share my charts, but please mention me as the author.

Bitcoin tops $9,000 as crypto rally shows no signs of slowing

The resurgence of digital currencies continues. The total value of all cryptocurrencies topped $400 billion for the first time since March 8, once again driven by the smaller coins, most notably Bitcoin Cash, which is up more than 80% in the last seven days.
Read more: www.marketwatch.com

Bitcoin Cash (BCH) is back with a vengeance - after suffering bad publicity throughout the bear market in February and March. But BCH showed it was capable of fast appreciation, as it added more than 22% to its daily price at one point, appreciating to above $1,402.07.
Read more: cryptovest.com

Cryptocurrency Market Will Get ‘Much Bigger’: Former JPMorgan Banker

The National Bank of Dubai (NBD), one of the largest banking groups in the Middle East by assets volume, has reportedly become the first bank in the region to successfully implement Blockchain technology in a check-issuance system to prevent fraud, local news outlet Arabian Business reported Saturday, April 21.
Read more: cointelegraph.com

Online travel booking agency CheapAir.com said Friday that it will switch bitcoin payment processors following a service change by Coinbase. CheapAir.com - which began accepting bitcoin back in 2013 in a first for the global travel industry - explained the move in a blog post, revealing it is eyeing a move to accept bitcoin payments through Bitpay.
Read more: www.coindesk.com

Crypto Ads Ban Is Temporary, According To LinkedIn's Co-Founder

Cointelegraph had a chance to talk to Eric Ly, Chinese-American investor and businessman and co-founder of LinkedIn, where for years he also served as founding CTO.
Read more: cointelegraph.com

Another Chinese City Is Backing a Big Blockchain Investment Fund

The city government of Shenzhen, China, is backing a dedicated blockchain investment fund, soon after Hangzhou city supported a similar effort. Announced at a blockchain event in the city on Sunday, hosted by the China Electronic Commerce Association, the fund aims to invest 500 million yuan ($80 million) in blockchain startups in Shenzhen during its first phase.
Read more: www.coindesk.com

The TRON project reaches out to the Ethereum community with an upcoming airdrop for all ETH holders. The airdrop of TRX tokens is aimed to introduce the project and its advantages.
Read more: cryptovest.com

The ban on ICOs in China is sending blockchain startups that are looking to raise funds into the arms of rival Asian regions. In particular, blockchain startups are increasingly flocking to Hong Kong, where there’s more freedom than Mainland China, and Singapore to launch their token sales, according to market participants cited in a report in South China Morning Post.
Read more: www.ccn.com

Bitcoin Payments Are on the Rise in the Baltics

Cryptocurrencies are gaining popularity in the Baltic states where no comprehensive regulations have been introduced yet. Businesses from multiple sectors, including real estate, online trade, the hospitality industry, and even healthcare, are taking advantage of crypto payments. Some companies from the region are already offering their services globally.
Read more: news.bitcoin.com

Visit my websites:
SteemBlockExplorer.com - SteemNow.com - CoinMarkets.today
¯\___(ツ)____/¯ Follow me @penguinpablo
cryptocurrency bitcoin blockchain news crypto
3년 전 by penguinpablo75
$44.41
169 votes
댓글 남기기 19
Authors get paid when people like you upvote their post.If you enjoyed what you read here, create your account today and start earning FREE STEEM!
STEEMKR.COM IS SPONSORED BY

Thanks for posting some great information

This is a large and comprehensive report,
thanks for sharing with us @penguinpablo
Re-steemed

In total agreement with @xpilar, a very complete report regarding the cryptocurrency market, these large contributions are what we need to find more often by our community. Regards!

The Iran news just proves all central banks work together.

For me the biggest breakthrough is that bitcoin is loosing dominance over the market, currently at 37,8% which means that in the future maybe altcoins won't be so influenced by the trends of bitcoin.

It's good to see everything in green ... Thanks for all the information, I read every day your post, and today just take time to thank you @penguinpablo.

Would you mind if I translate this post into Spanish? @penguinpablo

Just a heads up, steemnow is not reporting.

FOMO is kicking in hard. This run will be bigger than 2017.

its a huge informative article | 24 hour report | 7 day reports | just Awesome sir @penguinpablo
its a creative matter so thanks for share your technological post sir.