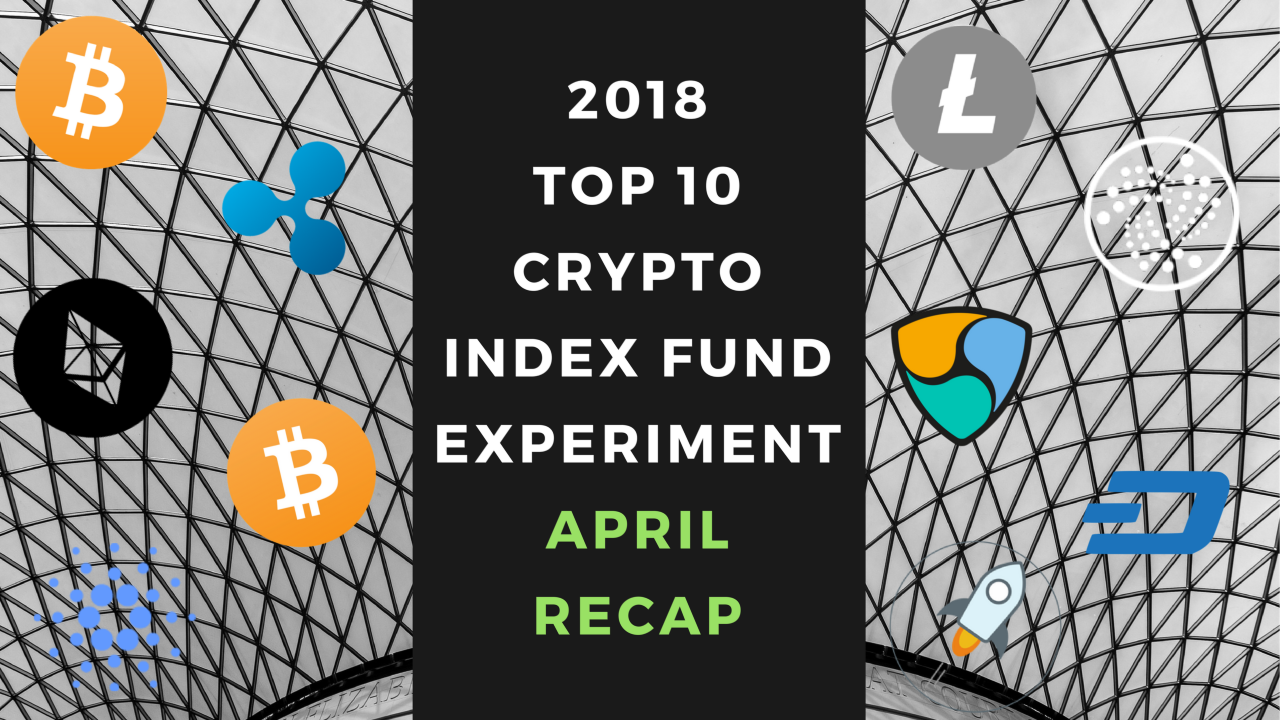 Instead of hypothetically tracking cryptos throughout the year, I made an actual $1000 investment, $100 in each of the Top 10 cryptocurrencies by market cap as of the 1st of January 2018. I'm trying to keep it simple and accessible for beginners, a type of homemade Index Fund* for those looking to get into cryptos but maybe not quite ready to jump in yet.
(*without weighting and rebalancing it's not a true Index Fund - but hopefully still helpful as a proxy for the entire market).

Look at that! GREEN! A welcome change, all cryptos included in the experiment are green for the month. Plus Stellar Lumens emerges as the only Top Ten crypto that is in positive territory at this point in the year since the beginning of 2018.

April Winners - Cardano bested the field in terms of monthly change (+127%) and movement (climbed from 8th position to 6th position). Stellar was close behind, up 105% from the beginning of April (although it slipped in rank from 7th to 8th) followed by Bitcoin Cash, up 92%.

April Losers - I’m tempted to claim victory all around since every crypto that began 2018 in the Top Ten made progress in April, something we haven't seen all year. Litecoin grew the least gaining “only” 22% and slipped from 5th to 7th place. Bitcoin is up “just” 27%. But not bad at all in light of the rough year crypto has had so far.

Overall update – Only Stellar in the green in 2018. Ripple, NEM, and Dash underperforming

Of the cryptocurrencies that began 2018 in the Top Ten, only Stellar is in the green, +34% since the start of the year. Stellar has also had the most upward mobility, moving two places from position 10 on January 1st to position 8 today. After Stellar comes Ethereum, which is very close to the break even point, only down -9% for the year (Ethereum has momentum - it's coming back from down -46% only a month ago).

April was a good month for crypto. The total market cap is up approximately $150B at $412.6B. This is a positive development, but for a bit of perspective remember that the total market cap at the beginning of the year was around $575B – the overall market is still down -28% since January 1st and still under the levels of both February 1st ($485B) and March 1st ($464B).

Bitcoin dominance is down quite a bit in April, falling from 45% to 37% today, about the same level it was at the start of the year. This signals that much of the recent rally has more to do with the altcoins gaining steam than the strength of Bitcoin itself.

There has definitely been a shift in April as the worst of the bear market appears to be over. Stellar is having an excellent spring, having outperformed its Top Ten peers for the second straight month. And only Stellar has increased in value since January 1st.

I'm also tracking the S&P 500 as part of my experiment to have a comparison point with other popular investments options. April has seen a return to volatility in the stock market. As of this post, the S&P 500 is down -1.6% for the year.

April was a good month for crypto and it feels like the tenor has shifted from fear to excitement or at least hope (for the time being at least). All markets go in cycles: it was nice to have a break from the falling prices and the constant stream of bad news.

Thanks for reading and the support for the experiment. I hope you’ve found this snapshot helpful. I continue to be committed to seeing where the experiment leads and reporting along the way. I’m on the road again (in Nepal) so my update video will have to wait. Sorry to disappoint all three of you who were watching :)

Feel free to reach out with any questions and stay tuned for progress reports. Wishing you all the best in your crypto adventures!!

cryptocurrency ocd crypto newbieresteemday minnowsupport
3년 전 by starthere50
$0.54
20 votes
댓글 남기기 32
Authors get paid when people like you upvote their post.If you enjoyed what you read here, create your account today and start earning FREE STEEM!
STEEMKR.COM IS SPONSORED BY

Upvoted and resteemed by # BlogBooster and the curation trail.
Have a great day!

I am curious to as what the final value will be.
I bought some ripple when it was at $2.20 full on FOMO. It was my first crypto purchase.

You have been upvoted by @rentmoney thanks for participating in our Followers Appreciation Promotion.

An up-vote bot should be along shortly :)

Thanks so much @rentmoney, I appreciate the support!

I'm curious too. April was finally a positive month. We'll see what the rest of the year brings.

Ripple: not a bad choice for your first crypto. Even it's disliked by many people in crypto (because they partner with banks) they are a major player. I don't know when we'll get back to $2, but it's approaching the $1 milestone soon - that's something to watch for.

I am fully confident it will reach well over $2 at some point. Ripple being bank related is the reason why it was my first purchase. There are so many cryptos these days and only a small percent will stand the test of time. Ripple being with banks makes it highly likely that it will be one of them.

Yeah, you chose wisely I think. Just hodl and you'll get back your investment and then some, hopefully soon!

great idea i really think you will gather some good data.
cant waite to se how it goes for the rest of the year..

Thanks so much @eyemon1, I'm glad I have you as a follower! I'm curious how this year will go too. I hope we've already passed the bottom and will only go up from here but time will tell :)

Sorry to hear that! When did you get in to crypto, right around the peak? Are you a trader or a holder?

Man, tough time to come in! What cryptos did you focus on?

You're right, gotta hodl at this time, not much else you can do! Hoping it turns around quickly to relieve some of the stress. Best wishes!

I hope things turn around for you.

me too, I am getting sick of fighting. Thank you

I'm not really familiar with either, but hold on man, crypto goes in waves. If you're a trader, all it takes is a rumor or a pump and things go nuts. Hang in there!

thanks for the vote of confidence sir

Better experiment. Carry on , I'm with you.

This post has received a 1.04 % upvote from @drotto thanks to: @rentmoney.

Your blog has been featured in this weeks Featured Followers Promotion

Congratulations @starthere! You have completed some achievement on Steemit and have been rewarded with new badge(s) : Thanks @leoo! That's so nice of you!