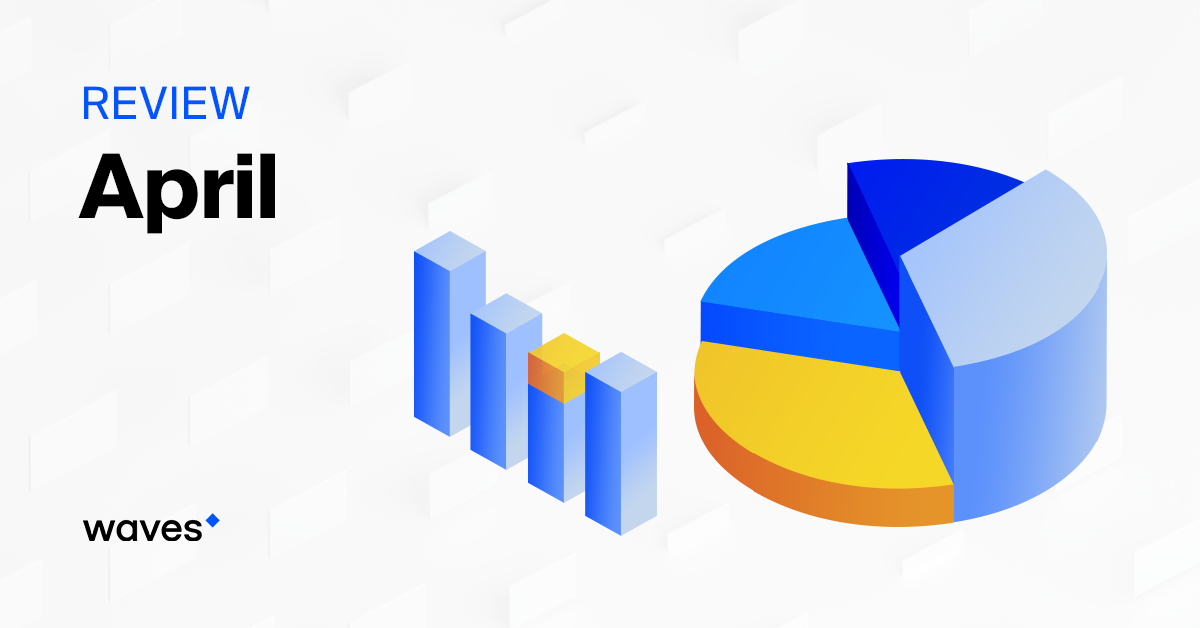 We’re pleased to present the Waves April review. If you missed anything during last month, this article should tell you everything you need to know. Enjoy the read!

It finally happened! Waves non-Turing complete smart contracts are currently on the testnet. Non-Turing complete smart contracts cover the majority of the common use cases. It is a universal and handy tool for implementing any business tasks you potentially might need — from exchanging tokens hosted on different blockchains to establishing precise mechanisms and terms for controlling a shared budget for your project or enterprise.

Below is the full coverage of the non-Turing complete smart contracts, check it out.

And here’s some detailed infographics on the Waves smart contracts. 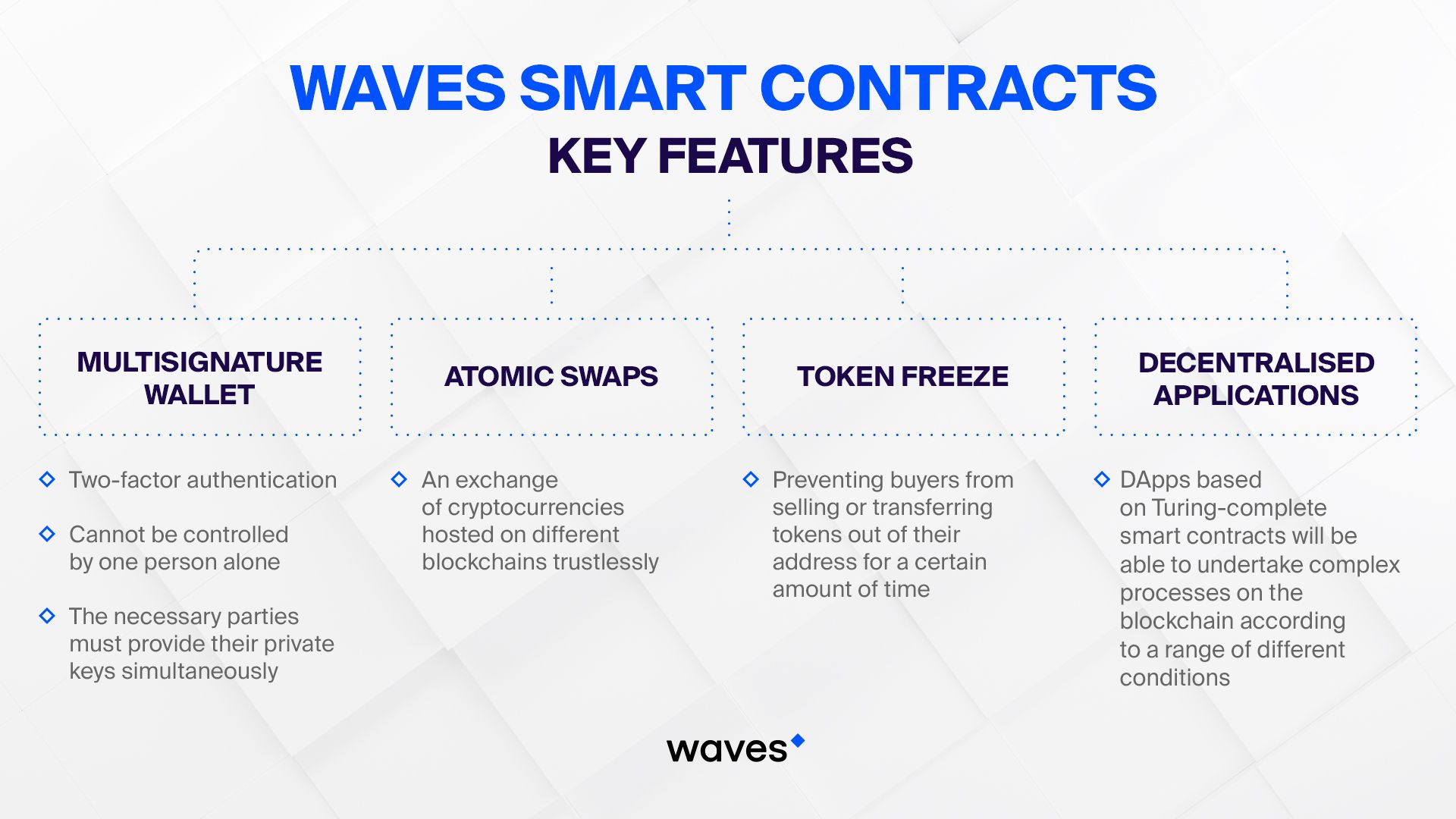 Sponsored Transactions is a new way of blockchain processing the transactions with custom asset fees. It will allow creating of autonomous ecosystems, where participants don't need WAVES to make transactions. When user makes a transaction, consensus-based algorithm will reward miners with waves equivalent from token issuer's fund, and issuer will get fee tokens. Details are here.

Data Transactions are currently being tested on the Waves testnet. These allow anyone to post data in different formats to the blockchain. Values stored in blockchain by data transactions can be used via REST API or accessed by smart contracts. Below are the key features of the data transactions. 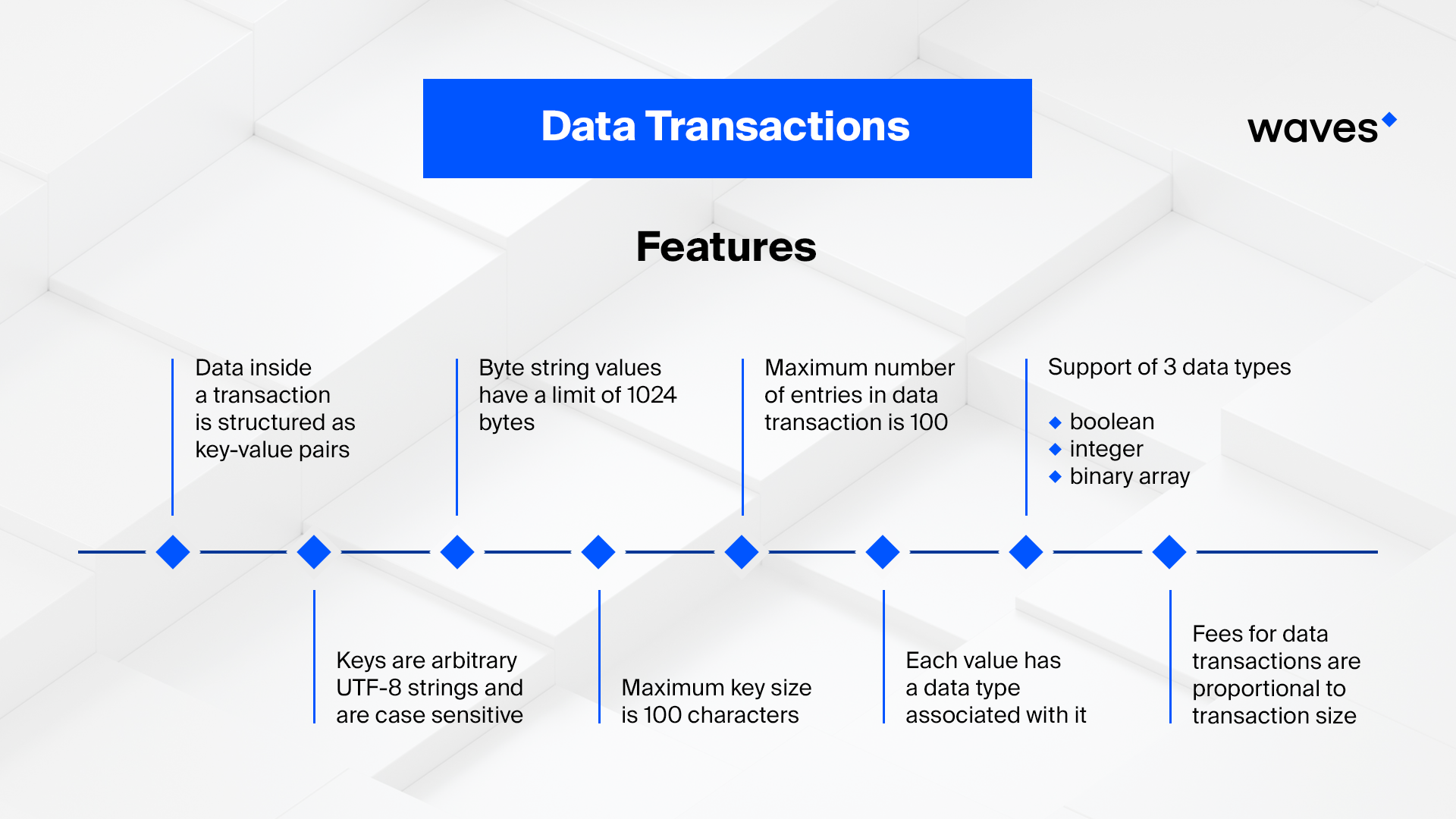 You can learn more about data transactions here.

In April, two APIs were added. The first one allows authorization of a user in a service, using heir Waves account. In general, the owner of the service must redirect the user to the official Waves Client, with certain query parameters, including some arbitrary data for him to sign. You can find more information about this API here.

Another API is a great feature for shop owners and merchants, allowing payments in WAVES or any other Waves tokens. Basically, the owner of the shop will have to do the following:

The details on this API can be found here.

Check out docs.wavesplatform.com — a single source for any Waves Platform documentation you need. All the features, the platform architecture, APIs, guides for developers, everything is explained and available for you! Four languages were added to to the Waves client: Turkish, Chinese, Hindi and Dutch.

We are continuing incorporating new gateways into the Waves client. In April, Bitcoin Cash and Dash were added! 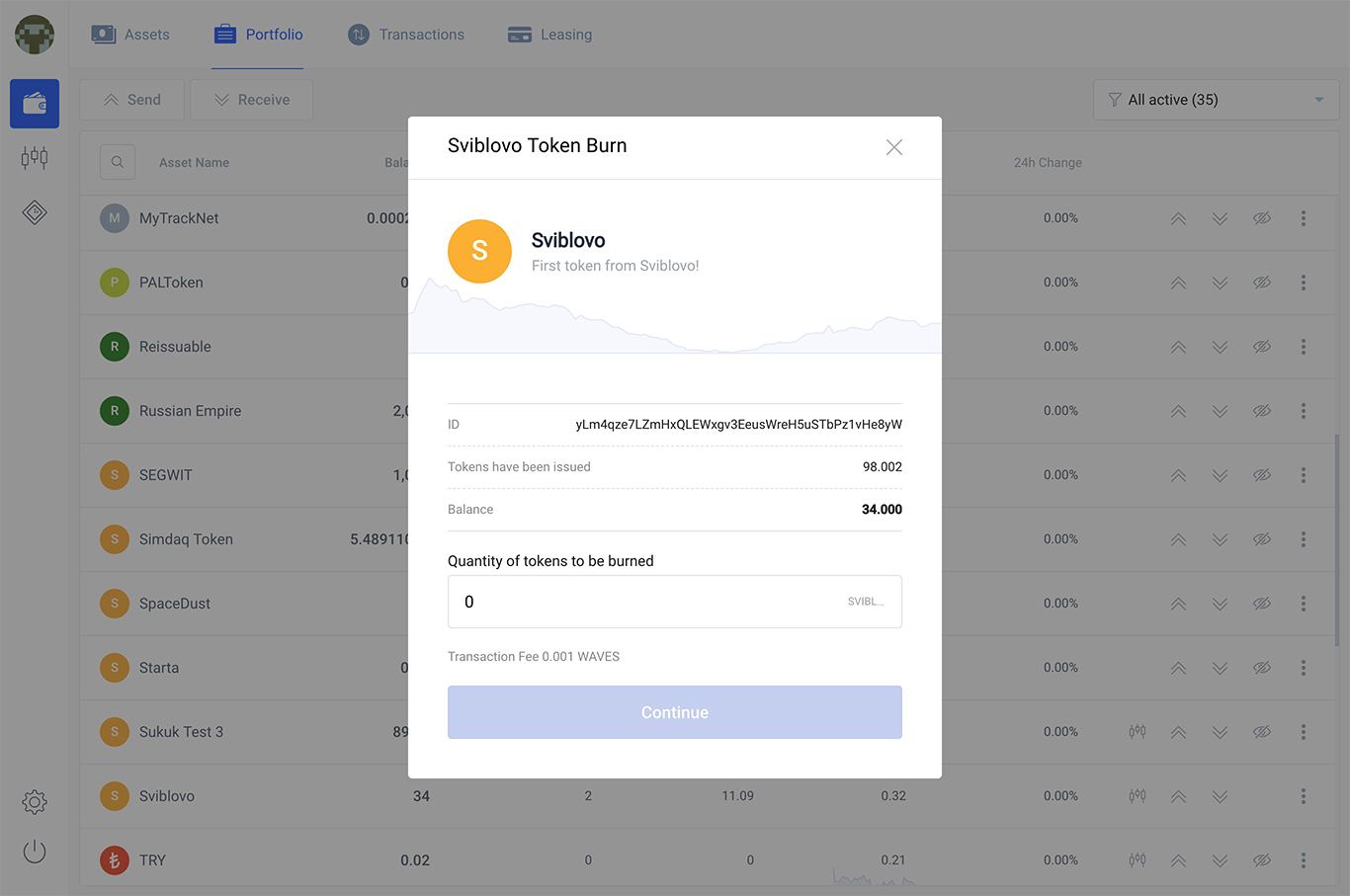 With this functionality, you can easily burn or reissue tokens you have generated! 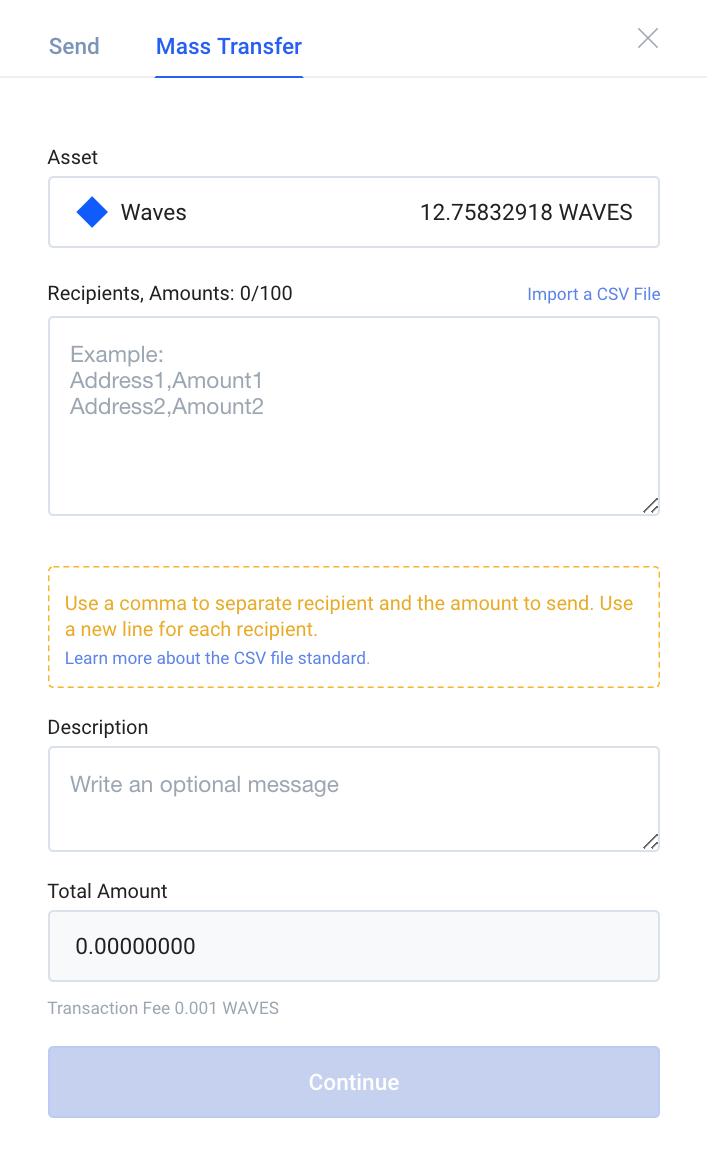 Mass Transfer transactions allows to send assets up to 100 recipients which makes it much cheaper, useful and effective. Great feature, allowing you to issue an invoice for any user of the Waves Platform. 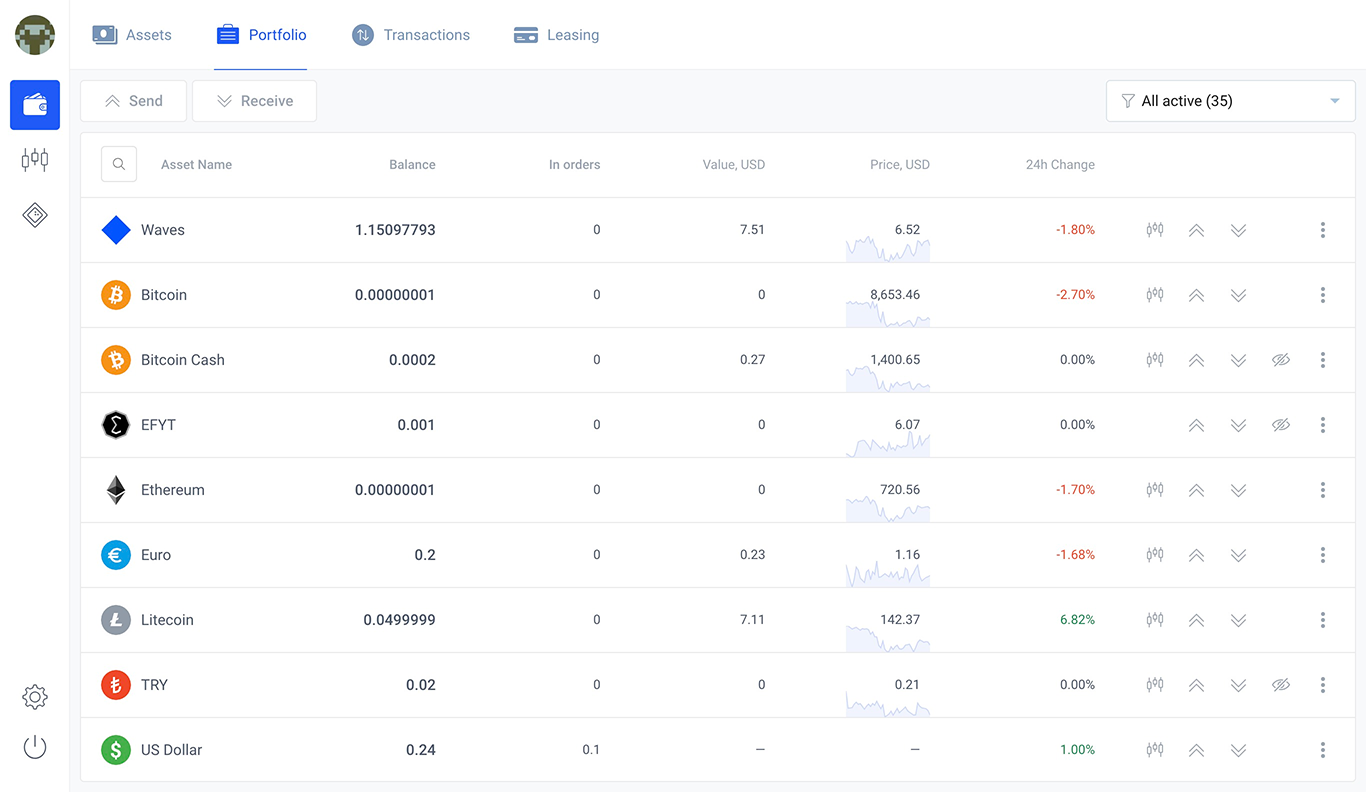 Portfolio of the Waves client has gone through a thorough redesign, allowing you to keep all the assets in organised and neat way! Check out the video of mobile version of Waves app in action in our Telegram News channel! The work is in full swing, so expect the release soon.

Among other useful features, which were added in April, are the following: 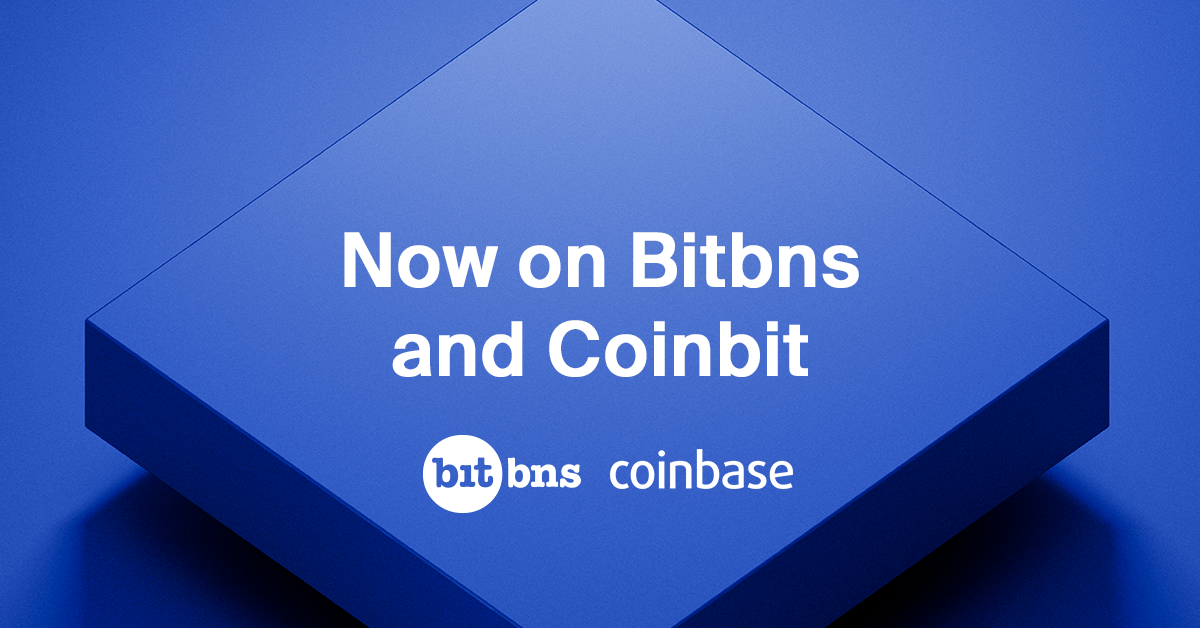 WAVES are taking over the world! Starting from April, you can buy WAVES on Bitbns exchange in India and on Coinbit in Korea. In April a huge event has happened: the community drifted away from Slack To Discord, since the latter is just more suitable for the community. Welcome to our official Discord! 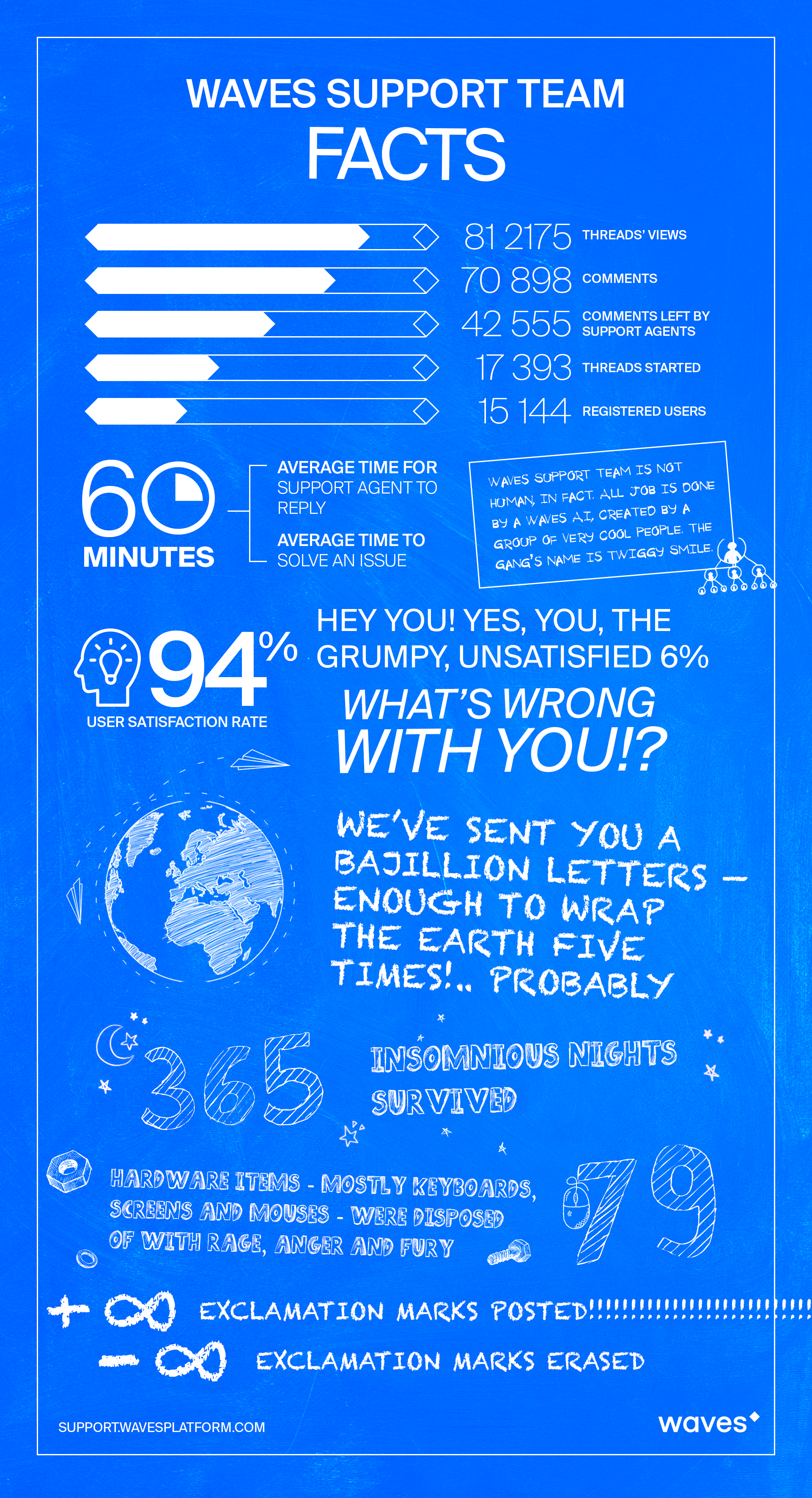 Above is some statistics on how well both the community and Waves support team we able to get through a long and wonderful year. We hope the past year will also be a keeper for you either! We promise to continue working 24/7 with our eyes glued to the screens and fingers squeezing keyboards and mice. Be patient and feel free to write us a message. We're always here to help! And don't forget to check your e-mail, especially spam, because we're super fast at solving your issues! Waves Lottery is a blockchain-powered lottery running on Waves Platform. We asked @deepred (Marco A.), Waves Community moderator and one of the lottery’s creators, some questions about the project and gambling on blockchain — here’s the article. 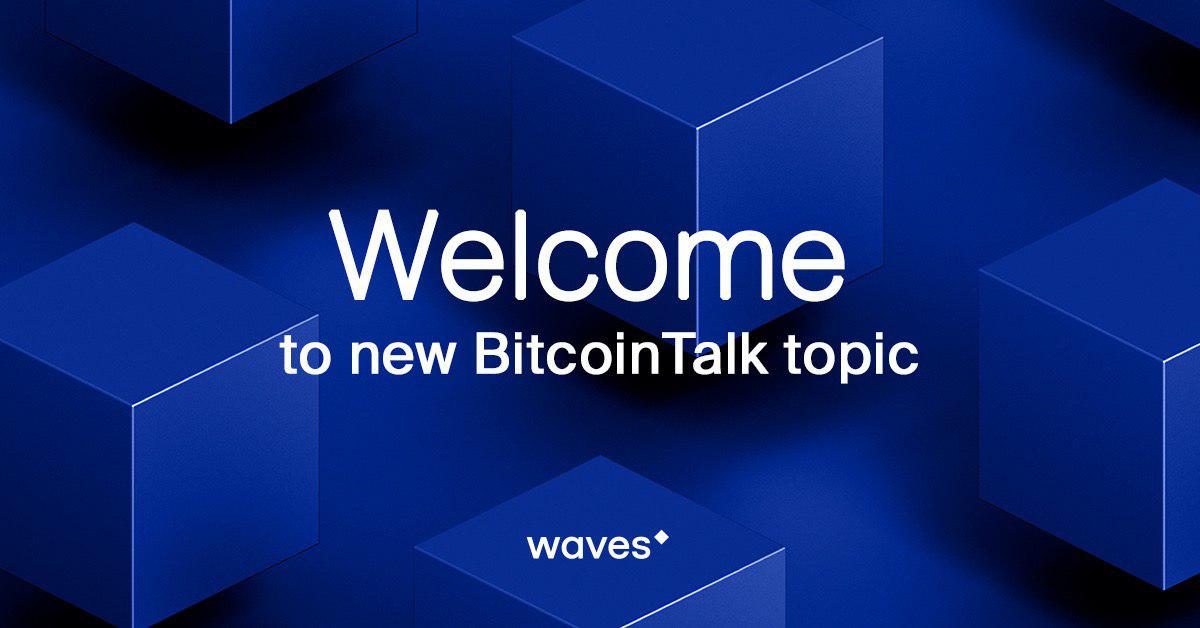 After a thorough preparation we launched our new Bitcointalk thread! You can visit it here.

Digilira Case: Exchanging Turkish Lira into WTRY Token and Back

Here’s a very inspiring story about a participant of the Waves Lab incubator: Digilira, a payment gateway for converting fiat Turkish liras into WTRY tokens hosted on the Waves Platform blockchain.

How to write the white paper for an ICO project

The team of the Waves Lab incubator for blockchain startups audits many projects planning for their ICOs. In this article, they explore the importance of the white paper and share our recommendations on how to prepare this crucial document. The new type of exchange will be powered by the Waves HDL token, which will be used to pay fees for every operation on the site. HOLDVEST, a powerful new trading portal that brings a suite of much-needed functionality to the cryptocurrency markets, will launch its pre-sale on 8 May — marking the occasion with an airdrop of HDL tokens to every WAVES holder. This will be followed by further airdrops in the course of the pre-ICO, distributing a total of 1% of all HDL tokens to the community. The pre-sale will end on 7 June or when the $5 million hard cap has been reached.

On April 11 Waves Platform gathered a huge crowd at the Waves Birthday Conference in Moscow. It was our first event of a kind, so it was great to see so many people from all over the world that came to congratulate us and to celebrate Waves’ second birthday with us! Sasha's speech, continued by a heated Q&A session, Waves Awards ceremony and a lot more — it was fantastic!

We will remember our Waves 2 Years Birthday celebration on 11th of April, for sure! It was a great time with great people in a great place! Thanks to everyone who sent us some nice words and congratulations on Waves Platform Birthday. We’re happy to know there are so many people who care about our company and team.

More info about the Waves Birthday Conference, including the fully recorded stream, can be found here.

Besides the Birthday Conference, April was full of events for Waves including the following: 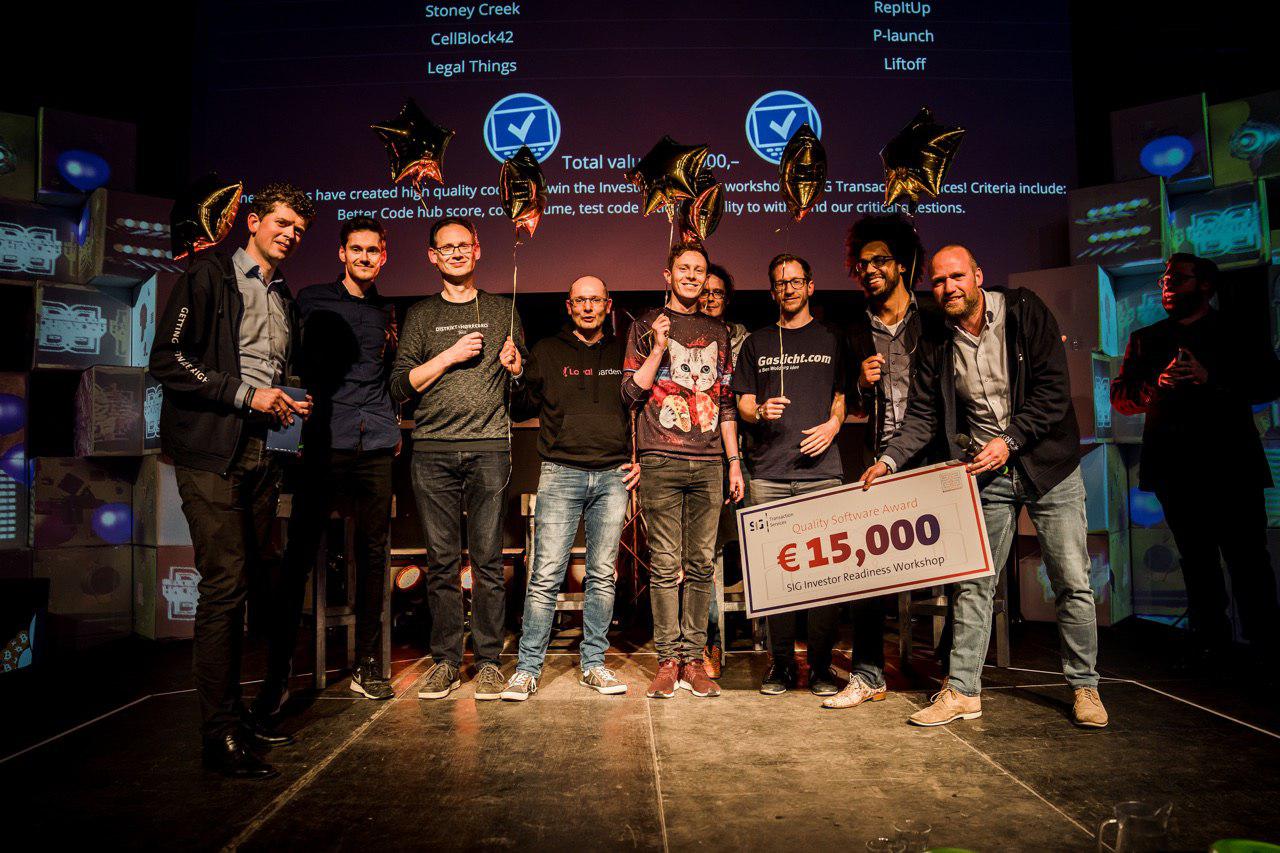 Congratulations to Waves & LegalThings team on having the best code quality in the Global Digital Identity track at Blockchaingers hackathon!

“Currently there's more than 10 k daily trades on Waves DEX, with a low spread for all major pairs, daily volume is around 2 million USD. Projection will be around 10 million by the end of May. User experience is already the same as with centralized exchanges. Great arbitrage opportunities still, so if you're into bot trading you can make some good money now with DEX — external exchanges arbitrage”, — Waves Ceo Sasha Ivanov.

An Update on Waves Platform Development

We have a lot of work to be done, so here’s a brief update on current development activities and plans on Waves Platform from our great development team and Alexey Kofman, Waves’ Product Manager.

The Future of DApps

Decentralized Applications, or DApps, is a great tool set that can be scaled and applied to any phenomenon. Actually, almost everything can be a DApp. Here’s what we think about it.

How Blockchain Will Influence Business

Blockchain doesn't perform miracles or provide you with cheat codes to hack the realities of doing business. But it can make investing and doing business more efficient. The question is who uses these tools, and how.

How to Trade Cryptocurrencies

So, you want to make money trading crypto. Well, it’s understandable, but here’s the thing: it’s actually not as easy as they make out. And there are various reasons for that.

Waves Smart Contracts: What to Expect and When

Cold Storage: How To Keep Your Blockchain Tokens Really Safe

Cold storage is the practice holding cryptocurrency securely by generating addresses offline — meaning that no hacker can gain access to them. Here’s how it works and why you should think about using it

Waves-NG: Speed, Capacity and a Bit of Blockchain for Dummies

What is blockchain and how does it work? Most of those who are trying to answer this question end up speaking Martian-like language of computing. So we did our best to tell you almost everything about Waves-NG and blockchain using some simple explanations (let your grandma read this post and let us know if it worked).

Why Waves is Best for Airdrops

Actually, you can conduct airdrops on any blockchain. But there’s only one that has specifically been designed to support the kinds of transaction volumes that a large airdrop requires.

The first iteration of Waves' Smart Contracts is a non-Turing complete implementation that enables business logic without the vulnerabilities of Turing-complete smart contracts. It is focused on account controls and enhanced more security. So, here’s what you will be possible to do using Waves’ smart accounts.

Does Blockchain Pose a Threat to Banks?

The blockchain/banks relationship is complex and cannot be treated as a matter of one replacing the other. Rather, this is a gradually evolving merger with many different aspects — some of which we consider.

5 most popular and reliable decentralized exchanges that you can use at this very moment, or in the near future

Here’s an interesting coverage of decentralised exchanges by Invest in Blockchain. DEX is among the Top 5!

“Compared to Ethereum, which people mainly use for Initial Coin Offerings because of its ability to create tokens, Waves is significantly more simple, efficient and cost-effective — for essentially the same service”.

Meet The Russians Behind Your Blockchain (And Cryptocurrency, Too)

"Russians are all over this space": who is behind the blockchain revolution? Check out the article.

“Waves is #1 when it comes to blockchain transaction speed — thanks to its implementation a ground-breaking new protocol which will allow its blockchain to process thousands of transactions per minute. This not only means that Waves is the fastest blockchain in the world, but also that it plans on staying that way”.

“Waves’ implementation is different to Ethereum’s. They are starting with non-Turing complete functionality: basic account controls like multi-sig, balance freezing (to prevent people spending tokens they are sent for a period of time) and other simple functions”.

Waves Platform To Challenge Ethereum With Its Own Smart Contracts

“Waves is now en route to making a debut to the top 20 coins according to coinmarketcap.com. With the current value of $6.64 per Waves coin, perhaps it is not too late to buy in and watch the coin orchestrate a Moon Landing and assist in buying that Lambo”.

KR1 also announced that it has purchased 30,587 WAVES tokens in the Waves Project for the cost of USD $6.41 per token.

"The Waves Decentralized Exchange has a solid concept and the backing of Waves platform only adds to its legitimacy".

As you can see, the April was an outstanding month for Waves! Once again many thanks for your congratulations on the Waves 2 Years Birthday and the feedback on the smart contracts. By the way, the May review is already coming!

cryptocurrency bitcoin crypto blockchain wavesplatform
3년 전 by wavesplatform66
$95.64
157 votes
댓글 남기기 6
Authors get paid when people like you upvote their post.If you enjoyed what you read here, create your account today and start earning FREE STEEM!
STEEMKR.COM IS SPONSORED BY

Blockchain has a lot of possibilities to offer today. Most big tech brands are now forced to go decentralized.

love WAVES! such an exciting coin and crew

It's so great to see an active and energetic group of people working on my favorite project!! I Love this!! Thank you so much!

Great work! was following the smart contracts on waves for a bit, glad it's on it's way.